Q&A with the Inventor of the Somero Laser Screed

The Somero Laser Screed revolutionized the concrete industry by increasing concrete floor quality and taking some of the physical burden off concrete workers. 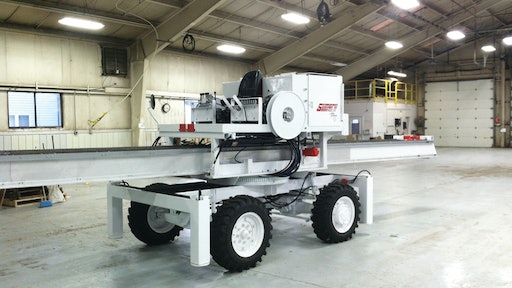 Dave Somero Sr. built the first Somero Laser Screed in 1984 while he was still owner of S&S Concrete Floors. The invention changed the concrete industry for contractors around the world. Concrete Contractor recently had the chance to ask Dave a few questions about the Laser Screed and his advice for today’s inventors.

Concrete Contractor: What challenges were you facing in the field that led you develop the Laser Screed?

Dave Somero Sr.: In the early 1980s we were getting more jobs that were requiring lower slumps and tolerances were starting to be discussed, Even though there were vibratory screeds available, the extra labor and materials needed to set up for strip pours was hard to get compensated for.

CC: When did you realize your equipment could help other contractors across the country?

DS: I was sure if we needed a better way, other contractors did also.

CC: How long were you developing the design for the Laser Screed before it became a reality?

DS: My brother Paul and I bounced ideas off each other. In 1983 I drew a sketch on paper of a concept. I would go to the World of Concrete and ask concrete road and bridge equipment manufacturers to build us a machine. It got so I got the feeling that when I went to their booths, they were thinking "Here comes that nut from New Hampshire again."

In 1985 the World of Concrete was in Las Vegas. We brought a mechanical engineer with us and showed him the equipment that was on the market. We discussed what we felt was wrong with it and what would work better. The engineer went to work and by that September we had a prototype. We asked the engineer for a telescoping boom, but because of the tolerances that we wanted the screed to achieve, he thought the only thing that would work was a ridged, one-piece boom. The one-piece boom created a lot of maneuvering problems around columns, etc. We then went to a telescoping boom. From then, all screeds were manufactured with telescoping booms.

It took a while to get all the bugs out of the system, but we continued to improve it. About 1986 the laser equipment manufacturer came to one of our jobs with the intent of telling us how to improve the machine. They told us not to touch it. They never saw anything work that good.

CC: How did the addition of the Laser Screed on your projects help your business change and grow?

DS: Tolerances improved. Fewer hassles over slump. We were able to increase the size of placements and complete the work with much less labor. Prior to the Laser Screed, we had a high turnover over workers. Once we took a lot of the bull work out of the job, it seems the turnover was less.

CC: Your invention helped transform the concrete industry by improving quality and increasing crew efficiency. It was a big idea that helped shaped the industry today. What advice do you have for other contractors out there who are dreaming up tomorrow’s big ideas?

DS: Don’t stop dreaming. Don’t expect to get by cheap if you need good engineering, accounting and lawyers. Coming up with new ideas was easy, getting a patent wasn’t bad, getting the prototype built and the engineering for the improved telescoping model cost about $500,000. All that was doable. But the one thing I was not prepared for was the marketing.

We had an awful time getting a contractor to buy a machine. We bought a twin engine plane and offered free rides to New England to watch the screed work. We only had one taker and I don’t know if he ever did buy one. We tried discounting, that still didn’t help. Finally we sold a machine to a contractor in England. Then two went to Canada. Finally they started to sell in the United States. Then we went into a recession but we had enough paid for inventory to carry us through. In the 1990s it took off. So I guess depending on the invention, the cash or the ability to borrow the money should be in place. With the way banks seem so reluctant to lend money at this time, I am not sure the Laser Screed would have made it through all the hurdles.

Ahead of the Curve

The first major construction project for the Washington D.C. area to use ECOPact low-carbon concrete from Aggregate industries is a Georgetown University Residence Hall, construction to complete 2022.
Jonathan Kozlowski
May 11, 2021