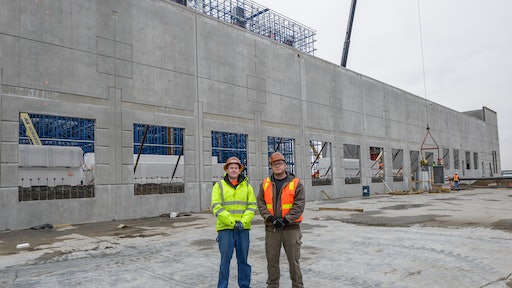 Poppoff Inc. of Moxee, Washington teamed with Joseph Easley Construction of San Jose, California to complete the division three concrete package. “At first it looked tough, but this is the type of challenge our company thrives upon,” says Matt Poppoff, Vice President. Poppoff was selected to place and finish the massive project that included an aggressive schedule and the challenge of making mass pours in the heat of the central Washington desert.

Poppoff Inc. was founded by Matt’s father Mike in 1977 and the company has constructed projects throughout the world. Dedicated supporters of the concrete industry, Mike was the ASCC 2014 President and the firm has long supported the industry regionally and nationally through associations such as AGC, ACI Northwest and the Washington Concrete and Aggregates Association.

Joseph Easely Construction was founded in 1994. Joe’s son, James, was selected to run the concrete package responsible for all the structural concrete, edge forming and reinforcing for the flatwork, tilts and concrete pavement. Essentially, both well respected firms were faced with the challenge filled with risk and sorting the logistics of such an undertaking to meet both the schedule and the budget.

“This was no small effort,” Joe states. “Just the rebar package was amazing. We essentially had to buy all the available #6 rebar in the northwest region of the country to make this happen.”

The core of the project was a six-inch work slab topped with six-inches of rigid insulation and vapor barrier. This work slab was then capped with a reinforced 18-inch mat slab that served as a structural member for the racking, as well as a performance slab in the main freezer warehouse.

“Logistically, the cold storage area drove the schedule and was the biggest challenge for the overall project,” Matt notes. “At any given time, each pour affected over 100 people when considering our crews for placing and finishing, ready mix and pumping operations all preceded by the insulation, forming and reinforcing crews.”

When all was said and done, the mat slabs were placed in pours as large as 54,000 square feet. More importantly, the specified F numbers for the slab averaged Ff75 well over the specified Ff50. Placement included three active boom pumps with an additional pump in stand-by mode. Poppoff utilized Somero SMP Power Rakes, two S-840 Somero laser screeds accompanied with a fleet of Whiteman, Allen and Wacker Neuson hydro-power riders. The base six-inch work slab to accommodate insulation, forms and reinforcing was placed in 3,000 yard increments for the 18 inch slab. The sub slabs required approximately 1,000 cubic yards per placement and also included structural fiber.

“Even the small issues became serious when outlining our plan,” according to James Easley. “For example, we had over 10,000 base plates for the rack system in the cold storage and the reinforcing could not conflict with the base plate locations. It took some serious thought over eight acres to make sure this was all coordinated.”

To accommodate the schedule the coolant lines were placed in the work slab and it was up to James to insure Poppoff could still make mass placements with a laser screed. “I loved the make shift rail system James came up with to make this happen,” Matt comments when discussing the many items that contributed to the project success. Tough, even to “old salts” like Joe Easely and Mike Poppoff, the “boys” were now carrying on the tradition.

The project was a big challenge for local ready mix supplier, American Rock Products, who managed pours as large as 3,190 cubic yard per pour with a production rate of 310 cubic yards per hour. “We managed to do this with just 12 ready mix trucks,” Brent Chigbrow, Operations Manager notes. “But it was a real stretch pouring all night while continuing our other services the next day.”

While it helped that the project abutted the Richland ready mix facility, the hourly production rates necessary to service three pumps was no small feat. All the pours were needed to be placed at night due to the heat of the central Washington high desert. Coordination of the forming and rebar was critical to accommodate the mass pours. “Something as simple as realigning the rebar and standees to support the weight of our screeds was essential to our success,” Matt notes as he ran down the lengthy list of pre-pour items. Scott Tarr, President of North S. Tarr Concrete Consulting was utilized as a floor consultant for the project.

Exterior pavement
After succeeding at the task of placing concrete for the building, Poppoff then focused on completing the 500,000 square feet of exterior pavement. Site grading required reverse slope of the pavement toward the building for collection and containment. Long owners and avid supporters of Somero laser screeds, Poppoff opted to upgrade to a 3D screed to accommodate the compound slope of the pavement.

“While a big investment, this project fully justified taking a step into the 3D world,” Matt says. “While it may be a common item in other larger markets, for central Washington this was a big step.” The 3D screed allowed for accelerated scheduling while minimizing edge forming and meeting the strict drainage tolerances of the site. The eight-inch reinforced PCC pavement was placed in excess of 30,000 square feet per pour as the rack installation progressed.

From the adjoining I-80 freeway in route through Richland, the project dominates the vista. This enormous self-supporting structure towers across the skyline soon to be teaming with shipments throughout the nation. Better yet, another generation of concrete contractors is facing the challenges and looking toward the future.