Does Cold Curing Water Cause Concrete Surfaces to Crack? 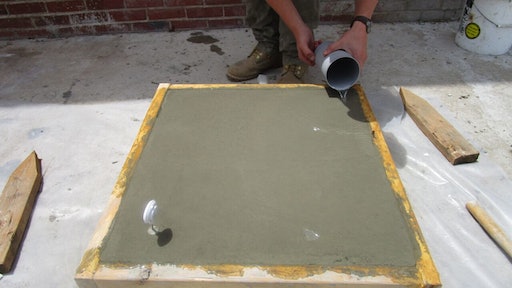 One form was was filled to the top. An immersion thermometer was inserted in the slab and the concrete temperature was recorded for two hours and 40 minutes until right after curing water was applied.

For many years it’s been assumed that applying cold curing water to hot concrete surfaces can cause thermal shock and cracking. As early as 1971, Section 2.2.1 of ACI’s Recommended Practice for Curing Concrete (ACI 308-71) advised that curing water used for ponding should not be more than about 20 degrees Fahrenheit (11 degrees Celsius) cooler than the concrete, because of temperature-change stresses which would be introduced with resultant cracking. More recently, ACI 308R-01 (reapproved 2008) “Guide to Curing Concrete” broadened the recommendation to not just water used for ponding, but to water used for continuous sprinkling and initial water application before covering with sheet materials.

“Curing water should not be more than 11 degrees Celsius (20 degrees Fahrenheit) cooler than the internal concrete temperature to minimize stresses due to temperature gradients that could cause cracking (Kosmatka and Panarese 1988). A sudden drop in concrete temperature of about 11 degrees Celsius (20 degrees Fahrenheit) can produce a strain of about 100 millionths, which approximates the typical strain capacity of concrete.”

Section 11.3.7 on Industrial Floors in ACI 301-10, Specifications for Structural Concrete, changed control of curing water temperature for all applications from a recommendation to a mandatory requirement with the statement that: “Temperature of applied [curing] water shall not be more than 20 degrees Fahrenheit colder than the concrete surface temperature.”

The concrete batch quantities for a cubic yard are shown in Table 1. Previous testing of concrete with these proportions produced an fc’ (specified strength) of 4,000 psi. Cement, sand, and crushed stone were stored at an ambient temperature of 89 degrees Fahrenheit prior to batching and tap water at 108 degrees Fahrenheit was used for mixing.

To avoid possible head pack in the tilting mixer, about 80 percent of the mixing water and all of the crushed stone was first added and mixed for less than a minute before adding the sand, cement, and the rest of the water. The standard laboratory cycle—mix three minutes, rest three minutes, and mix two minutes—resulted in a low slump so more water was added to produce the final slump of 3-½ in. Total mixing time was 10 minutes. The concrete temperature was 85 degrees Fahrenheit and density was 149 pcf. Because the tilting mixer was loaded to capacity, there wasn’t enough concrete to make test cylinders. Instead, the slabs will be cored at 28 days to determine in-place strength.

After the initial floating there was no bleedwater, so final finishing was started when a footprint indentation was about one-quarter inch. After floating the surfaces of both slabs, they were hand troweled, then checked periodically to make sure the troweled surface was hard enough not to be marred by adding curing water.

Several gallons of curing water were slowly poured on the other slab at one edge, flooding the entire concrete surface for several minutes. This was done because it had been suggested that adding all of the curing water in one area would cool that area more than other areas. Plastic sheeting was then placed on the slab and smoothed to eliminate most of the air bubbles. Boards were placed on the slab to hold down the plastic and shield the surface from direct sunlight to minimize mottling so any cracks would be more observable.

And the results are…
The surfaces of both slabs were examined for cracking just before curing water was added, and observed for cracking each time the ponded water temperature was measured. No crazing or thermal cracking was noted, including the area where all the curing water was added. The following day the surface was examined through the ponded water and no cracking was noted. The boards and plastic sheeting were temporarily removed from the other slab and a slight discoloration (zebra striping) was noted but no crazing or thermal cracking.

After one week, water was drained from the ponded slab and the surface was examined as it dried to check for cracks. The surface of the slab cured with plastic sheeting was wet and also checked for cracks. No craze or thermal cracks were noted in either slab.

Ed. Note:
Heather J. Brown, PhD, FACI is Chair and Professor for the Concrete Industry Management Program at Middle Tennessee State University. She can be reached at heather.brown@mtsu.edu.

Jason Crabtree is Laboratory Manager for the Concrete Industry Management Program at Middle Tennessee State University. He can be reached at jason.crabtree@mtsu.edu

Acknowledgements: The authors appreciate the assistance of two participants in the National Science Foundation Research Experience for Undergraduates program, Caroline Pounal and Kyle Schuetrum, while conducting this pilot study. We also thank the American Society of Concrete Contractors for assisting with the study.