The Evolution of a Poured Wall Contractor

Rich Kubica, owner of K-Wall Poured Walls, LLC has spent his entire life in the concrete foundation and wall business. Like most futurists who have the foresight to take on radical ideas, he decided it was time to add precast walls to his offerings. 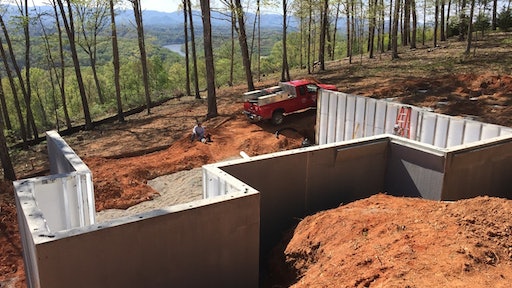 Rich Kubica, owner of K-Wall Poured Walls, LLC has spent his entire life in the concrete foundation and wall business. In fact, one could say Kubica is a visionary for what a foundation and wall contractor should be doing. Like most futurists who have the foresight to take on radical ideas, Kubica decided it was time to consider adding precast walls to his business.

In the 1950s, his father formed Jerry Kubica Foundations (which later became K-Wall) located in Chesaning, Michigan. Jerry retired and shut down the business in the late 1970s. By 1992, Rich revived K-Wall in Traverse City, Michigan and operated the business until 2011.

“I grew up in the poured wall business,” Kubica proclaims. “All throughout my adolescent years, I never had a job except for pouring concrete walls.”

Along with his wife Patty, the Kubica's relocated their family and the business to Asheville, North Carolina in 2006. K-Walls began its North Carolina operations in 2007.

“We all know what happened in 2008. At that time, I had one year in the new business. I was a brand new wall contractor in Western North Carolina and then, the whole world seemed to die. Just about every concrete wall contractor in this area went out of business; but we survived.”

While so many contracting firms faded away during the downturn of the economy Kubica says he survived because of diversification.

“We did our own footings and walls. We took on flatwork projects and became licensed applicators of gypsum concrete underlayment. We poured Gypcrete apartment buildings and multi-family units,” he says. “We started doing our own decorative concrete work and performed a tremendous amount of epoxy floor coating jobs. These are the things that kept us alive. When we weren’t pouring walls because nobody was building houses, we were skimming along doing those kinds of jobs.”

As the economy improved and competing contractors started coming back to the market, Kubica became seriously interested in adding precast walls to his portfolio of services.

When it comes to precast walls, they are made in a factory. Workers are standing on level ground, lifting nothing heavy and not putting wear and tear on their bodies. The installation of precast walls involves a crane and a bolt which is installed at the top of the wall to secure each wall section. With minimal heavy manual work, it becomes an attractive option to both the older crew members as well as the younger, less seasoned laborers.

“As a poured concrete wall contractor, it’s in my blood, but there is also an evolution too,” he explains. “The foundation industry is changing. Poured concrete walls are the king of foundations. When all other foundations fail, poured walls excel. However, as I examined my business and crews, I continually asked myself, ‘How do we do it easier?’ And my answer was precast walls.”

He contacted Ron Ward, CEO of Structura Technologies for assistance. “Ron had enough foresight to come to North Carolina and examine everything that was going on in the market,” He says. “We’ve been watching precast walls for 20 years. The timing wasn’t right at that time. They weren’t addressed in the building code. They were still a proprietary product and most importantly, no one believed in them. At that time, it was more expensive to build concrete walls with a precast product.”

What has changed over the course of 20 years?

“We use a lot more concrete when pouring foundations, but when we build a precast wall, I use 70 percent less concrete. The time has come for precast walls. It’s a great wall and it’s a good thing for the poured concrete wall contractor to finally have another product in their hands.”

While poured concrete walls have dominated the foundation market since the 1950s, the precast concrete wall market is new and it’s growing.

According to Kubica, for the last 10 to 15 years, other wall systems have been eating into the poured wall market share. “You have ICF’s making a comeback into the market. Precast is starting to make its dent. Every new foundation system that comes out on the market has to pull from another market.”

The MonoKast Precast Wall System is manufactured at K-Wall’s factory in Fletcher, North Carolina. The walls are delivered to the jobsite via truck and trailer. The walls are set in place using a crane and rest on a crushed stone footing as specified by the 2012 IRC building codes.

When placement is completed, the walls are fully insulated and studded. They are ready for finishing and require no additional framing. The stud cavities can have commonly used insulation added to them to further increase the R-Value of the wall. In addition, MonoKast Precast Walls can be combined with traditional cast-in-place walls creating a “hybrid” foundation.

Precast is not the enemy
Precast concrete has its benefits for the builder too—faster construction times, reduced cost of construction, and the versatility of precast makes it an option contractors should consider adding to their service offerings.

“We recently set a MonoKast wall, 180 lineal feet, and the job was completed in three and a half hours, on a Saturday,” he says. “We caulked all the joints, cleaned up and never went back to the job. No one was tired. Everybody was happy and the builders in this area love it.”

Part of Kubica’s drive to promote precast concrete walls as an option for contractors is because they can be set up anywhere. According to Kubica, just about everything is a combination of poured and precast concrete in Western North Carolina. “This notion isn’t true for most other markets, it’s an opportunity for the contractor to have a one-stop shop to do everything for the builder–prep the slab, pour the retaining walls and set the MonoKast walls.”

While it’s difficult for some contractors to see the value of adding precast to their offerings, Kubica says the concept of precast walls is simple.

“I’ll always be a poured concrete wall contractor. It’s in my blood, but the difference between that and offering precast walls is it’s like framing. If you’re going to get into the construction of precast walls, you become a framer. We install cripple studs, jack studs and headers. We’re doing the same thing as the contractor who frames homes with wood, only the material we’re using is concrete.”

If you think precast walls is just a fad, think again. It’s a growing market and contractors have a choice to offer another product that goes hand-in-hand with the work they are already performing. Making a choice to diversify your business is never a bad decision. Precast walls meet the newest building codes and energy codes, reduces the volume of materials required for a job and opens up new revenue streams.

“I didn’t say I only poured walls, no, I build walls,” he says. “I came to the realization that I better figure out how to build the next generation of walls before my competitor does. Poured walls will always be around and will always be the leader.”