A 300,000 square foot expansion of a food processing facility required the contractor to install a high performance floor with minimal construction and control joints. 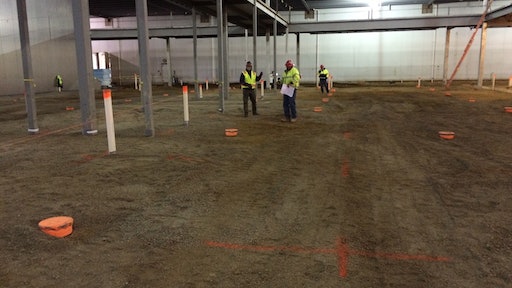 One of the major concerns on the project was the extensive plumbing running throughout the floors with a potential for reflective cracking along the pipe placements.

ONEsource was the awarded general contractor on this project and TWC Concrete Services was subcontracted to place all of the concrete slabs. There were three major obstacles to address in pouring these concrete floors. First, with the extensive plumbing running throughout the floors, potential for reflective cracking along the pipe placements was a concern. Second, this state-of-the-art food processing facility needed to eliminate the majority contraction joints where bacteria is prone to grow. Third, the vast majority of the slab sloped to 390 floor drains that were depressed approximately two inches.

In order to overcome the first two challenges, CTS Cement’s System-K Shrinkage-Compensating Fiber Reinforced Concrete (System K) floors were recommended. A System-K mix design uses Type K shrinkage- compensating cement that is designed to counteract the drying shrinkage cracking common with ordinary portland cement. Type K is an expansive, hydraulic cement that effectively utilizes the restraints within the concrete (i.e., reinforcement, piping, etc.) and the controlled expansion of the Type K cement to offset the strains caused by drying shrinkage, keeping the concrete in compression throughout the service life of the floor. With the restraints in tension and the concrete in compression, drying shrinkage cracking is minimized or eliminated, and curled slab edges can be prevented. Type K shrinkage- compensating cement is used in conjunction with reinforcing K-Fibers that permit the elimination of conventional secondary reinforcing steel in the floor slab design.

The nearly 400 drains created a challenge for efficiently placing the slab so that water traveled to the depressed drains. Most any concrete contractor would just default to manual screeding methods to accomplish such a slab. But TWC is not your ordinary contractor and Vice President Anthony DeCarlo had higher aspirations. He called in Myron Hillock, Sales Director at Somero Enterprises Inc.® to discuss his options. “Anthony was looking to place the slab with as few construction joints as possible, maximize productivity and deliver far superior floor quality” recalls Hillock. The complexity of hundreds of drains on 20 foot centers is tremendous. The two inch fall then rise every 10 feet to each drain meant a traditional laser transmitter could not be used nor could TWC’s existing Laser Screed® machines because the heads were too wide as were several other screeds considered. 3D technology was the obvious alternative but GPS based systems would not work since the pours are indoors with a roof overhead thus obstructing any view of the sky; hence a total station based 3D system was needed. After much consideration the obvious screed choice was a Somero S-840 Laser Screed® machine equipped with the Somero 3-D Profiler System®. The S-840 offered the proper screed head width and was also equipped with a 3D blade to fine-grade the sub-base to accurately control concrete thickness and yield.

To insure the 3D profile truly represented the “As Built” conditions, every slab corner and each drain was physically plotted. Then the high ridges were added midway between each row of drains. From this profile, concrete thickness was subtracted with a minor adjustment for compaction and the Somero S-840 accurately fine-graded the dirt sub-grade. Prior to each concrete pour, the S-840 Laser Screed® head was attached, 3D profile elevation returned to its original height and the slab was to ready for place and finishing.

The CTS and IMI QC/QA teams worked together to produce a mix design that required no control joints in slab pours up to 150 feet by 150 feet. IMI worked with TWC to keep the mix workable and set times in line with project schedules requirements without impacting the performance of the System-K Concrete floors.

Floor construction started in October 2014 and was completed in April 2015. Over 5,000 cubic yards of System K was placed. The System-K design allowed the slab consultant, CRT Concrete Consulting, and the contractor, TWC Concrete Services, to eliminate the conventional temperature and shrinkage steel throughout the slabs. The only steel required was two #4 bars at the perimeter of each pour and around columns or other penetrations. The Somero 3D laser screed worked well in assuring the concrete properly tapered to the depressed drains. In fact, the computerized system identified a location where a floor drain was inadvertently covered in concrete.

The concrete finishing crew was pleased with the mix workability and indicated no noticeable difference between System-K finishing and conventional concrete finishing. Each placement was followed by a seven  day wet-curing process to ensure maximum long-term performance.

Another 1,000 yards worth of System K Concrete was placed on the upper decks of the facility. The mix design was modified with a high range water reducer so that it could be delivered with a six inch slump while maintaining performance.

Sugar Creek is very pleased to have a high performance floor with minimal construction and control joints. Furthermore, the floor is free of cracking and curling associated with other slab systems. The success of this project has resulted in other Sugar Creek project being constructed with System K concrete.