New Concrete Adhesive Anchor Installer Certification - Who Needs It and Why 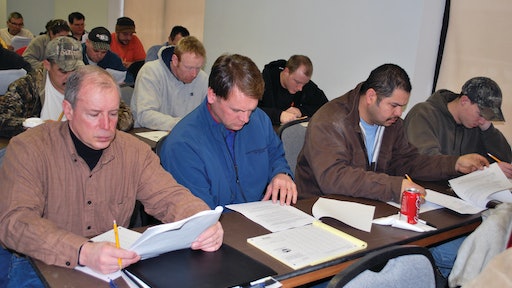 The Adhesive Anchor Installer Certification includes a hands-on exam and a written test.

The American Concrete Institute (ACI) and Concrete Reinforcing Steel Institute (CRSI) introduced a new Adhesive Anchor Installer Certification program late in 2011. It is in response to the National Transportation Safety Board's (NTSB) recommendations from its investigation of the 2006 Central Artery/Tunnel Project in Boston, Mass., or the “Big Dig.” Failure of a group of adhesive anchors caused a section of the tunnel’s concrete ceiling to collapse, killing a motorist and injuring another.

After the Big Dig tunnel collapse, the NTSB recommended to ACI that it use its building codes, forums, educational materials and publications to educate the industry about proper installation of adhesive anchors under sustained tensile-load applications. In an effort to satisfy those requests, ACI and CRSI worked with the Concrete Anchor Manufacturers Association (CAMA) and leading manufacturers of adhesive anchors, including Hilti, ITW-Red Head, Powers Fasteners and Simpson Strong-Tie, to develop the certification program.

The Adhesive Anchor Installer Certification requirement is included in the new ACI 318 Building Code, part of the 2012 International Building Code. As jurisdictions adopt the 2012 IBC, which for the most part will take place over the next 6 to 18 months, contractors will be required to meet the necessary certification in regard to anchor installations.

When is a certified installer necessary?

Not all adhesive anchor installations require a certified installer. Certification is required for anchorages in sustained tension loading conditions and installation orientations from horizontal to vertically upward.

Currently there are no certification requirements for mechanical anchor installations.

What contractors learn in the certification class

The Adhesive Anchor Installer Certification is offered through the ACI/CRSI program and its Sponsoring Groups (SGs). According to John Nehasil, ACI managing director of certification and chapters, as of May 2012, 15 SGs offer the program, four more are scheduled for orientation by the end of June and another 22 have signed up for future orientation.

The certification test consists of a 75-question written exam and a performance exam that requires students can read, comprehend and execute a generic Manufacturer’s Printed Installation Instructions (MPII) for the installation of an adhesive anchor in the vertical down position and in an overhead position through a blind install. “If an examinee fails the written and passes the performance, he or she will need to retake the written portion only,” Nehasil explains. “The performance exam is in two parts; if either of the two parts is failed, the examinee only needs to retake the part failed. Retesting and passing must take place within 1 year of the written exam or performance part passed.”

As of May 2012, installers representing seven contractors have been certified through the program. Nehasil states, “Many Sponsoring Groups have been waiting to conduct the program until a workbook becomes available. The ACI Education Department, again in cooperation with industry experts, is completing this critical component for availability by the end of June 2012. ACI is also in the process of producing a video as a companion to the workbook, which is designed to illustrate the performance examination and provide visual clarity to installers participating in the certification program.”

The preparatory class includes review of these best practices:

Other topics are also covered in the training. Moisture, for instance, can affect adhesive anchor bonds, especially regarding saturated concrete. Contractors also need to take properly dispose of adhesive anchor product. And contractors will learn placement best practices for either threaded rod or rebar into the adhesive.

The adhesive anchor installer’s first reference in questions about installation is the MPII. If further clarification is necessary, all the major manufacturers of adhesive anchors offer field training and contractor technical support. “Every leading manufacturer provides education and training access to the end-user,” says Ellen Baum, direct sales manager for the Midwest with ITW Red Head. “In today’s technology-driven world, it’s even easier for contractors to get the information they need with manufacturer websites and videos.”

It should be noted that manufacturer training alone does not satisfy the ACI 318 Appendix D Building Code requirements for certification of adhesive anchor installers.

Concrete contractors and general contractors need to be aware of the situations in which a Certified Adhesive Anchor Installer is needed on their jobs. As the 2012 IBC is adopted by more jurisdictions in the coming months, it will be necessary for these contractors to have qualified adhesive anchor installers that have obtained certification.

Anchor Threaded Rod and Rebar into Uncracked Concrete with Poly-Grip

While the hot-hipped galvanized wedge anchor should never be installed into soft, hollow base materials, their hot-dipped galvanized coating is excellent for use in moist atmospheres.
Concrete Fasteners Incorporated
January 16, 2018

To ensure proper construction and safety, it is important to determine which fastening system will be the best choice for attaching the sill plates.
November 14, 2017

The Cintec Dissipative Anchor allows for small amounts of movement through a sliding mechanism to prevent the possibility of pull-out damage at the anchorage head
Cintec America
July 21, 2016

DEWALT announces a new range of anchoring and fastening solutions designed for performance and productivity. The new range of DEWALT anchors will launch in the back half of 2016.
DEWALT Industrial Tool Co.
July 12, 2016
Follow Us