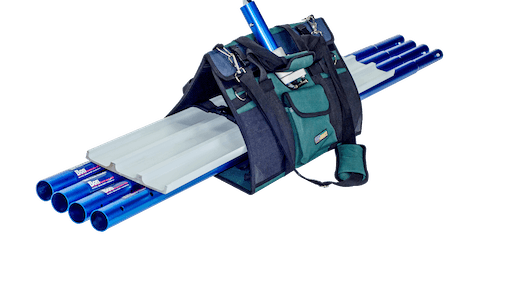 Bon’s new Bull Float Tote Bag holds one bull float, channel float or fresno with a bracket attached and four handles. The open ended tote is constructed from durable nylon and is equipped with plastic feet that run the full length of the tote to help keep the items upright and stabilized. Tools stay secured, protected and organized for storing and transporting.

The tote closes securely with a full length Velcro fold over flap and two buckle closures. It is equipped with four interior and five exterior pockets and a tape measure clip. A “window” on the front of the Tote allows the bracket to remain attached to the float when stored in the case.

The tote is available for purchase by itself or as part of Bon’s new Bull Float Tote Kit, which includes the following Bon items:

This Digging Deeper Podcast episode talks about concrete vibration, what it does, why it’s important – and why you want to control the frequency.
Jonathan Kozlowski
January 4, 2021

See the cordless TE 500-A36 in action and learn why Hilti is excited about its new product offering.
Hilti Inc.
February 7, 2020

The saw not only generates the power of a 15 amp corded saw but features the most run-time of any cordless rear handle circular saw, capable of making up to 570 cuts per charge.
Milwaukee Tool Corp.
August 2, 2019

Dressed as a construction worker, a young girl explains the features of each tool.
Max USA Corp
June 7, 2019