Twin-shaft batch mixer from BHS used on major construction site in Stuttgart, Germany, for the construction of large, flower-shaped concrete pillars for an underground station 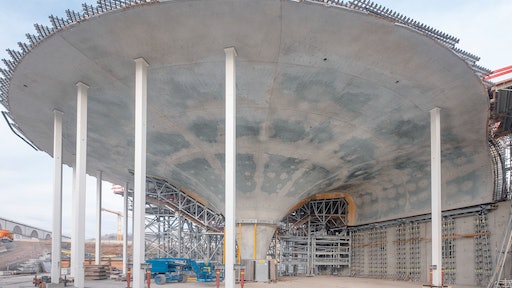 The sulfides in the granulated blast-furnace slag give the pillars a blue tint, which will disappear over time and turn to white.
Godel-Beton/BHS-Sonthofen

The concrete manufacturer Godel-Beton based in Stuttgart, Germany, has been relying on the tried-and-tested twin-shaft mixing technology from BHS-Sonthofen for decades — and is currently counting on its expertise in the Stuttgart 21 project. The architectural centerpiece of the new Stuttgart underground station is starting to take shape: Three of the impressive pillars that will provide stability and daylight in the concourse have been completed. Two twin-shaft batch mixers with an output of 79.5 cubic feet of compacted concrete per batch are used to produce the highly complex concrete needed for the construction. 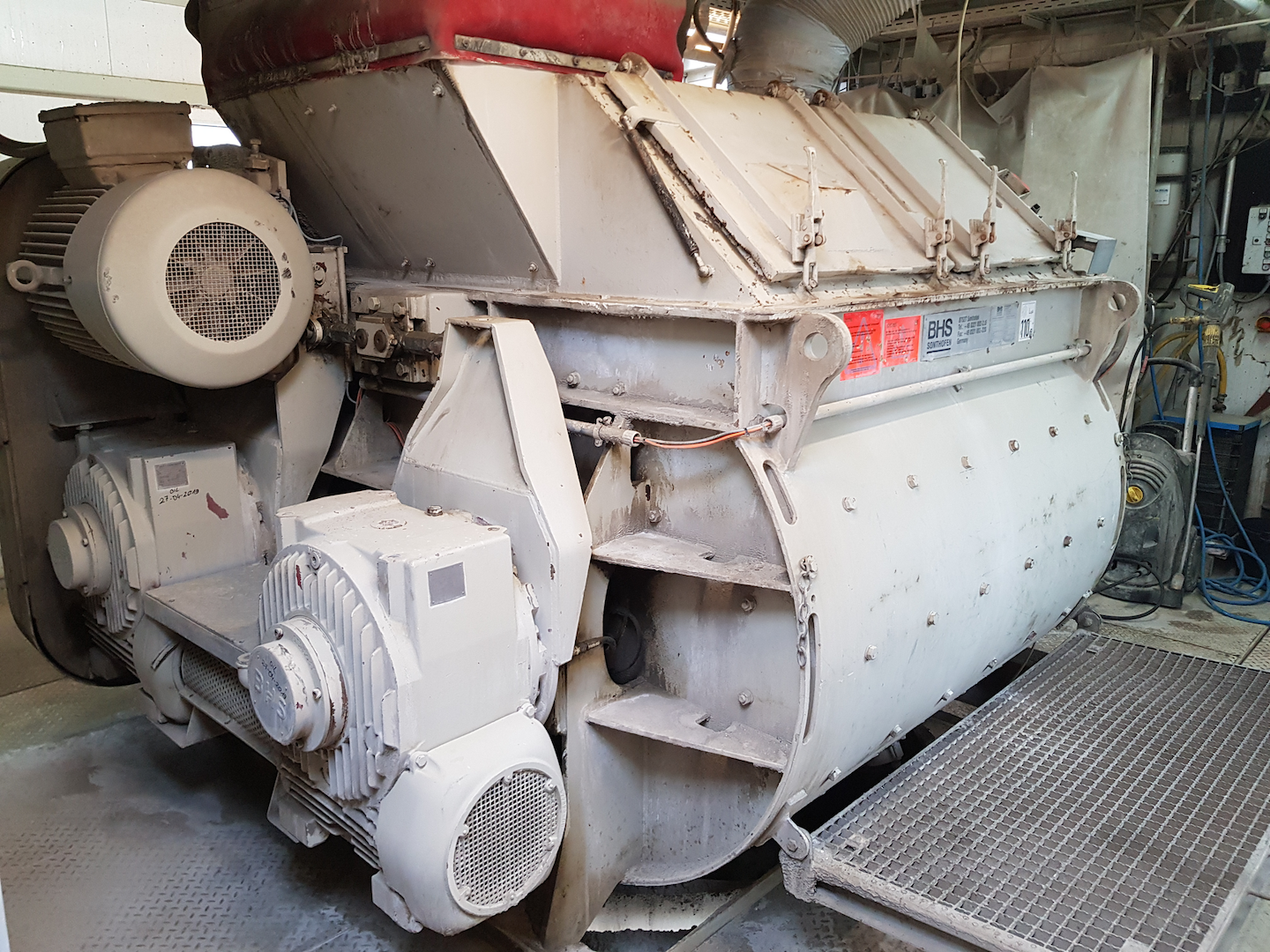 Maximum performance, even during continuous use: The twin-shaft batch mixer blends the complex formula in just 90 seconds.Godel-Beton/BHS-SonthofenThe most impressive part of the railway station concourse is without a doubt the ceiling, which is supported by large pillars. The flower-shaped concrete pillars are designed to look as if they are flowing down from the ceiling. Openings in the pillars allow light to flow into the underground concourse. These features — which will one day give the building its striking aesthetic — put great demands on the engineers, construction staff, the material and the technology. A special work group had to deliberate the technical possibilities for the pillars ad nauseam — from the unique formwork, to the functional requirements for the materials, right through to its look. The first of the 28 planned pillars was built at the end of 2018. Two more followed in spring 2019.

The requirements for the concrete used in this exceptional project are colossal. The concrete is produced by Godel-Beton, which has been involved in the Stuttgart 21 project since 2013 and supplies its concrete to a number of different sub-sectors. A mobile mixing system with a twin-shaft batch mixer of type DKX was installed right on the construction site of the underground station to produce the concrete needed. The mixing system, which was previously used to mix concrete for the Scheibengipfel tunnel in Reutlingen, produces the 1,236 cubic feet of concrete needed for the base of each pillar. A second mixing system is located in nearby Fellbach for the chalice-shaped top, which requires several times the amount of concrete needed for the base (17,657 to 28,252 cubic feet).

The concrete mixture was specially developed for the pillars by Marko Aldag, a civil engineer at Godel-Beton, together with his team. “The requirements for the concrete were very exacting and sometimes even contradictory,” says Aldag. The fact that the supports have to achieve their necessary compressive strength is only one of the challenging aspects that the expert had to contend with.

The concrete used is white exposed concrete. Its light color — a basic requirement from the architect — is the result of using white cement as well as very bright rocks. The challenge here was that white cement releases a lot of hydration heat, which creates tension in massive structures such as these pillars. Adding cement with granulated blast-furnace slag reduces this effect.

And to ensure that the pillars meet stringent fire protection specifications, the formula also includes a significant amount of PP fibers. These must be completely encapsulated within the cement glue during the mixing process. An unfortunate side effect is that the fibers increase the need for water, affect the consistency and harden the material, which makes the concrete difficult to process. Additives ensure that the mixture remains pourable and stable. 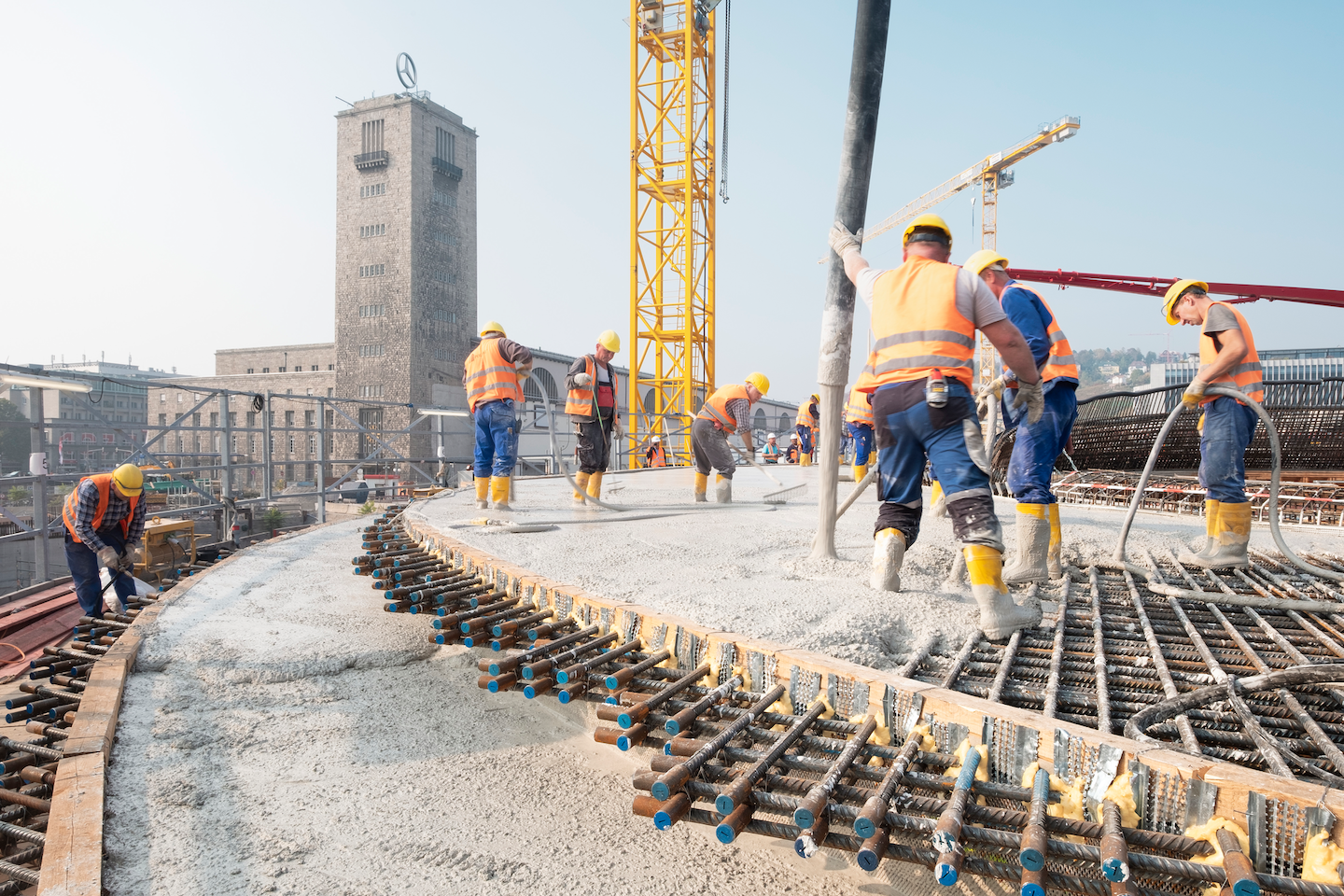 No room for errors – the project poses a challenge to the machinery, staff and material.Godel-Beton/BHS-Sonthofen“Many months of development went into finding the right formula. The concrete and casting processes were tested in advance in a model pillar and continuously adapted relative to the outcome.”

Distributing the many additives throughout the concrete requires a reliable and effective mixer that ensures consistently high mixing homogeneity and short mixing cycles. Godel-Beton has always relied on the twin-shaft batch mixers from BHS-Sonthofen that was once again the partner of choice for this important project.

“Some of the experts involved thought that the formula would require a mixing time of at least four to five minutes,” Aldag said. “We were able to prove that our mixer can do it 90 seconds!”

Godel-Beton also appreciates other advantages offered by BHS’s technology. Reliability is paramount for this project. The Stuttgart-based company has twin-shaft batch mixers of all sizes working all over Germany. At BHS, important wear parts fit in any mixer, which means that the size of the mixer doesn’t matter. This makes it easy for Godel-Beton to keep important wear parts in stock, without requiring a large parts warehouse. And if a part is not available on site, the service department of BHS steps in.

“At Godel-Beton, our mixers have been operating daily for many years. A while ago, one of the machines was impacted by gearbox damage,” says Gerd Schuler, a sales representative at BHS-Sonthofen. “But thanks to our large in-house parts warehouse, the new gearbox was on site in just four hours.” Concrete manufacturer Godel has been relying on BHS-Sonthofen’s twin-shaft mixing technology for decades.Godel-Beton/BHS-SonthofenThe concrete is subjected to several controls to ensure the quality of the material. Starting at the Fellbach plant, Godel-Beton employees check the raw materials used during production. A second check takes place on the construction site, and the installation company checks the material a third and final time at the pump.

Only the white coloring cannot be checked, even after the formwork has been removed. Sulfides in the granulated blast-furnace slag initially give the pillars a blue tint. The pillars will gradually turn white once they are exposed to atmospheric oxygen. Until then, nothing stands in the way of constructing the remaining pillars for the Stuttgart underground station.

Bauman Landscape and Construction has embraced next-gen volumetric mixing technology to place concrete for some of San Francisco’s most important infrastructure.
June 20, 2019
Follow Us