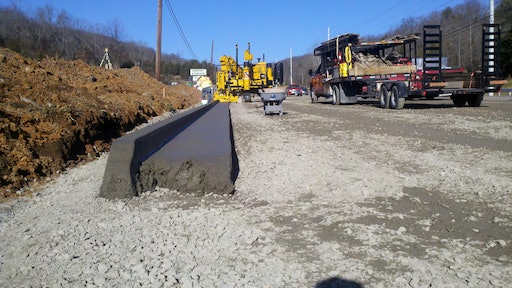 "In terms of accuracy, we're accustomed to achieving the already tight +/-0.1-in. finish grade specifications with our Topcon 3D-MC2 earthmoving equipment, so achieving even tighter DOT specs using Millimeter GPS on our concrete paving work is more than possible," says Lee Thompson.

Convince Tennessee DOT that highway curb can be poured stringless

“Since this was our first time using GPS technology on a curb machine, we were nervous at first and began the project by running stringlines in front of the machine,” said Lee Thompson, concrete superintendent for Elizabethton, Tenn.,-based Summers-Taylor. “The T-DOT inspectors wanted to see the stringlines, too; but when we saw the machine could run perfect without them, we stopped placing them.

“The finished grade is a straight line - no flutter or waves; it is very impressive,” Thompson added. "Once the T-DOT inspectors saw how good the results were, they pretty much pulled their lower jaws up off their chests and left us with one inspector."

“With its long, straight highway run this is the perfect project for us to try our newly acquired 3D GPS machine control on our Gomaco GT-3600 slipform concrete curb and gutter paver,” Thompson said. “We’re among the very first contractors in America running a stringless GPS-based curbing machine.”

The Summers-Taylor GT-3600 is equipped with a Topcon GPS+ receiver and an on-board graphical display. A pair of masts - each topped with a Topcon PZS-I laser sensor - are mounted on the machine to control grade elevation and steering.

To enable Topcon’s Millimeter GPS, which uses a fanned laser zone more than 30 feet high to enhance the accuracy of the GNSS satellite technology, a pair of Topcon PZL-1 transmitters are positioned at control points on the site. Thompson places the transmitters 500 feet apart to track the position of each receiver on the curb machine and relay curb location and elevation data to the curber control. As the pour progresses, Thompson repositions the most-distant transmitter in front of the machine to maintain continuous slip-form flow.

Summers-Taylor has a six-member concrete crew, including the machine operator. They place expansion joints every 100 feet, muscle the heavy cast iron catch basin grids into place, smooth any imperfections in the newly formed gutter and curb, broom in the texture, and then move the Topcon PZL-1 transmitter ahead as the Gomaco GT-3600 progresses.

Thompson says he feels comfortable “pioneering” machine-control technology on the curb work because he’s followed the evolution of the technology for 10 years, learned how its benefiting Canadian contractors, and his company is successfully using GPS technology with earthmoving and site grading.

“In terms of accuracy, we’re accustomed to achieving the already tight +/-0.1-inch finish grade specifications with our Topcon 3D-MC2 earthmoving equipment, so achieving even tighter DOT specs using Millimeter GPS on our concrete paving work is more than possible,” says Thompson. “In fact, our curb machine operator comes from the dirt side so he’s comfortable with machine control technology and achieving quality results.”

Summers-Taylor is completing its work on the two-year Highway 75 project on time. Thompson reports that adding the Millimeter GPS capability to the curbing machine is improving both accuracy and speed, and virtually eliminating rework.

“Clearly, we’re saving time and cost by not needing workers setting stringlines or needing to replace them if they’re knocked down,” Thompson said. “When you consider quicker speed, greater accuracy and reduction of rework, we’re at least 20 to 25 percent more productive with the stringless GPS curb machine.

“My concrete crew certainly likes that at the end of the day they don’t need to collect stakes and string; instead, they retrieve the two transmitters, stash them in their cases and head home.”