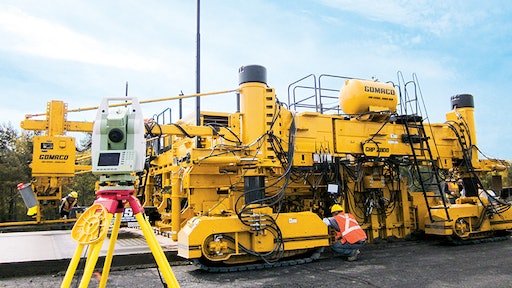 The New York State Thruway wanted to experiment with unbonded concrete overlays. A five-mile, four-lane section of Interstate 90 near Hamburg was the test section. Surianello General Concrete, based out of Buffalo, N.Y., won the bid to pave the 9-inch-thick concrete overlay. The American Concrete Pavement Association (ACPA) was involved throughout the design and implementation phases of the project.

The age and the design of the original roadway created a paving challenge right from the start. It was built in the 1950s and didn’t conform to current geometry requirements for superhighways.

“They built it with a standard crown section going through all horizontal curves. No super elevations,” said Frank Surianello, president of Surianello. “Now, to conform to Federal Highway Administration guidelines for superhighways, you have to adjust and make your transition from normal crown to full bank horizontal curves. The depth of the blacktop underlayment at these locations varied from 1.5 to 7.5 inches. Anchoring traditional baskets would be a challenge. Since this was an overlay, the next issue was setting string. You’d have to pre-drill the holes for the stakes and spend a lot of time and effort anchoring them. Plus, stringline basically holds the job hostage because your access is very limited.”

The answer to both the transverse joint and stringline challenge for Surianello was a GOMACO four-track GHP-2800 concrete paver equipped with a new independent IDBI attachment and a Leica Geosystems 3D stringless guidance system to control the paver. Both the 3D and IDBI systems were completely new to the company. Before they took their new paver out on a project, they wanted to do training and a test pour at their headquarters. GOMACO sent members of its 3D team, service department and an instructor from GOMACO University to provide hands-on training.

“We did a 15- foot test pour at our facilities in Buffalo where we trained our operators on the dowel bar inserter and the stringless,” Surianello said. “The hands-on experience allowed us to get our ducks in a row so when we mobilized for the actual project, everyone knew their job and we could hit the ground running.”

With training completed and the crew confident in their abilities, Surianello moved the GHP-2800 on site and began paving the overlay project on Interstate 90. Concrete was supplied by their own central mix batch plant batching nine cubic yards. Tri-axle dump trucks carried the concrete to the paver on the existing road and dumped directly onto it in front of the paver. Tight conditions on the project didn’t allow much room for haul roads or a placer/spreader.

The GHP-2800 paved 25 feet wide and nine inches thick. Every 15 feet the GOMACO IDBI was placing 25 dowel bars for the pavement’s transverse joint. Each bar was 1.5 inches in diameter, 18 inches long and placed at a 12-inch center spacing across the width of the slab.

“We had 1,000 joints on the project, and we did not find one bar that was out of place,” Surianello said.

The Leica 3D system also worked well for the stringless rookies. Surianello teamed up with a local surveying company to build their paving models. “They surveyed the existing blacktop and built the models to maximize efficiencies for depth,” Surianello said. “The company, Innovative GPS Solutions LLC, actually went through GOMACO University’s stringless class and they did a very good job building our models for us.”

Real-time pavement smoothness behind the GHP-2800 was monitored by two paver-mounted GSI (GOMACO Smoothness Indicator) units. The state of New York uses the two-tenths blanking band to monitor the smoothness of its new roads.

“It’s a California-type profilograph, two-tenths blanking band, five inches per mile, so it’s pretty lenient,” Surianello said. “When we profilographed this project, we were getting readings of zero, or 0.1 inch. The readings were so good that I was skeptical, so I asked another contractor to bring out their lightweight profiler and see what kind of numbers it read. We were getting in the 70s on the IRI, with readings as low as 30. We really found some interesting things using the GSI and getting real-time smoothness numbers and what affects the smoothness coming out the back of that paver. It was just incredible.”

Surianello’s paving production averaged around 2,600 feet per day, or between six to eight feet per minute. The GSI showed them they were reaching maximum smoothness results at that speed with the concrete paving mix they were using.

A new GOMACO T/C-600 texture/cure machine followed the GHP-2800 applying a longitudinal tine and white spray cure. Wheels attached to the T/C-600’s sensors allowed steering and grade control off the new slab on the stringless project.

“We had 15 headers on the project and they came out perfect. We didn’t have to grind one square foot anywhere on the job,” Surianello said.

It’s too early yet for the Thruway Authority to have any results on the success of the concrete overlay test. One thing that has been determined though, is how smooth the new overlay is.

“I’ve had some industry feedback stating straight out that this is the smoothest concrete pavement that anybody has ever ridden on in New York,” Surianello said.

This new remote control system allows the operator to control the machine from the ground/work area.
Terex Corporation
May 9, 2019
Follow Us