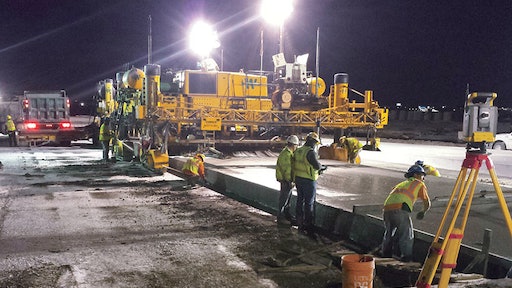 The Fort Lauderdale-Hollywood International Airport in Broward County, FL, was dealing with departure delays on every single flight. The length of an existing runway, 9R-27L, just wasn’t long enough anymore at 5,300 feet. The Broward County Board of County Commissioners created a plan to extend their southern runway to 8,000 feet to accommodate the larger commercial aircraft in operation today.

The project wasn’t as simple as tearing out the existing runway and building a new one in its place. To create enough area for the longer runway, a new 60-foot-high man-made embankment had to be built. If that wasn’t enough of a challenge, to the west of the new embankment, concrete bridge structures had to be built to support the runway extension and adjacent taxiway as it crossed over U.S. Highway 1 and the Florida East Coast Railroad line.

Archer Western Construction LLC, based in Tampa, FL, won the bid for the grade work, subbase preparation and concrete slipforming of the airport’s new runway and taxiway. Due to delays on the project, they had to carry out their portion of the work while the other major contractors finished the embankment and bridge structures.

Their paver for the project was a GOMACO four-track GHP-2800 with Leica Geosystems 3D machine guidance. The GHP-2800’s jobsite mobility, along with it being a stringless project, would allow them to pave when and where they needed amongst the crowded project site.

“Archer Western came in and did the topping off, let’s just say, of the project,” said Justin Cooper, project manager for the company. “It was a nice GOMACO project. For our subbase, we used the 9500 placer. On the concrete paving we used a PS-2600 placer/spreader with a GHP-2800 paver setup at 18.75 feet wide, followed by a T/C-600 texture/cure machine. We ran stringless with a Leica Geosystems setup. Then, for our hand pours, we used the 9500 and RTP-500 placers.”

Paving work on the new runway began in February 2014. As grade work was completed, subbase could be placed. Archer Western used their GOMACO 9500 to place the 6-inch-thick cement-treated base (CTB). Originally, the plan was to pave the new 8,000-foot-long concrete runway in 2,000-foot sections. Project phasing wouldn’t allow for that, and paving runs were shortened to 1,500 feet in 10-hour shifts.

The concrete for the project was mixed on site in the company’s portable batch plant. Requirements called for a standard P-501 concrete, 650 flex airfield mix. The concrete had fly ash added and used manufactured sand instead of natural sand. Slump averaged 0.75 inches. The plant batched 10-cubic-yard loads and eight to 10 trucks worked to supply the concrete to the paving site.

The end-dump trucks unloaded onto the large conveyor belt mounted on the left side of their GOMACO PS-2600 placer/spreader.

“This was a basket job with dowel baskets every 20 feet. The dowels were 1.5 inches and placed on 18-inch centers,” Cooper explained. “With the slump of the concrete being as low as it was, you get that initial set and the PS-2600 placer gives you a better tolerance for running that GHP-2800 behind it and achieve a smooth finish.”

Their GOMACO four-track GHP-2800 slipformed the new runway in 18.75-foot-wide, 16.5-inch-thick paving passes with a standard crown down the middle. At that width and thickness, each lineal foot of new runway lane required nearly one cubic yard of concrete.

The paver is equipped with a Leica Geosystems 3D guidance system, eliminating stringline from the site. Since most of Archer Western’s paving is done at night to accommodate the subtropical heat of southern Florida, the 3D system offered a distinct advantage.

“There’s nothing to trip over,” Cooper said. “At night we used to have to make sure we had lighting all the way up and down the project so the guys didn’t run into the stringline. Now, we don’t have to set up the whole lane at once. We can move the light plants along with the paving equipment. That’s nice.

“It’s worked out well for us. We also used our Leica Geosystems setup on the CTB placement, so we went stringless all the way from subgrade up. We had some initial setup with 3D getting things warmed up and getting the system down. We’ve learned to do a dry run at the beginning of each shift. We’ll back the paver up 60 feet prior to the actual concrete coming into place to make sure the paver is coming in at the right elevation and not making any adjustments when it gets to the start of the paving.”

Mother Nature proved challenging as well on the project. Rain showers would hit every night, sometimes twice each night, and the Archer Western crew had to be ready to cover their fresh concrete at a moment’s notice.

“This is a first for me to come pave this far south and when we were in the heat of paving, it would rain just about every day,” Cooper said. “At first we wondered how in the world are we going to pave this with all of the rain? The guys became good meteorologists out in the field at night, and we did a lot of covering with plastic.”

Slipforming the runway was divided into eight paving lanes. Smoothness specifications using the two-tenths blanking band and edge slump requirements had to be met on all areas of the new concrete pavement.

“Our quality is very good on the pavement and we took no deductions for PWL (percent within limits) specifications,” Cooper said. “We were allowed a 16-foot straightedge and had to use a two-tenths blanking band with a profilograph. Seven inches per mile was the cutoff for payment and we typically ran in the two inches per mile range.

“When we ran our straightedge behind the machine, we had to ensure there was not excessive edge slump as part of our quality checks. That was the biggest challenge because that manufactured sand is a little harder to finish, but the paver handled it and built a good edge.”

A GOMACO T/C-600 texture/cure followed the paver applying a burlap drag finish and a white spray cure. Transverse joints were saw cut into the new runway every 20 feet.

With the project complete, the new runway’s designation changed from 9R-27L to 10R-28L and the Fort Lauderdale-Hollywood International Airport is operating more efficiently with fewer delays.

“We did a lot of concrete work in a small amount of time, basically completing the runway portion of the project in five months,” Cooper explained. “We’ve had a lot of good feedback about the new runway and the tower is very happy to have a second runway operational.”

This new remote control system allows the operator to control the machine from the ground/work area.
Terex Corporation
May 9, 2019
Follow Us