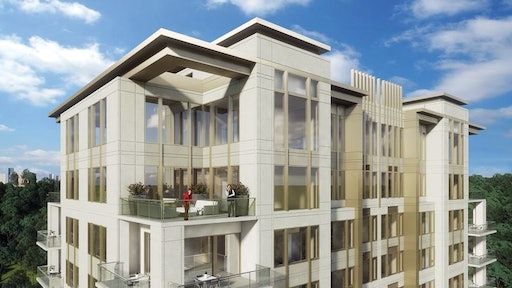 One of the unique features of the tower is its 700 square feet of terrace with two balconies wrapping the corners of the building.

Raising the bar on luxury high-rise living, Houston, Texas, is welcoming Belfiore, a deluxe 26-story condo described as the most significant residential tower ever built in Houston. To ensure greater efficiency from the ground up, newer Putzmeister concrete placing equipment, featuring the latest technological advances, is being utilized on the upscale project.

The 336,000-square-foot (31,200m²) residential condominium will be situated on a two-acre Uptown tract in the Galleria district and offer modern floor plans larger than any other in the city. Belfiore will add 46 residences with only two 4,650-square-foot (430m²) condos per floor.

Featuring amenities unique to the Houston market, each home will offer nearly 700 square feet (65m²) of terrace with two balconies wrapping the corners of the building. Plus, each will have its own private entry lobby, served by two high-speed elevators. More glass and more aluminum are other updated touches that will make the building unlike any other in the area.

Every detail has been meticulously considered and planned: from the 11-foot (3.4m) ceiling heights, to floor-to-ceiling glass, to the concealed parking garage located underground. The same meticulous planning holds true for the concrete placement, starting with the mat pour for its 14,150 square foot (1,315m²) foundation. To proficiently handle the pour, a trio of Putzmeister truck-mounted concrete boom pumps placed 3,190 cubic yards (2,440m³) of concrete for eight hours nonstop.

Responsible for the concrete placement is ACPA member Keystone Structural Concrete, LLC, the structural concrete division of Keystone Concrete Placement headquartered in Houston. The parent company was established in 1992 by the Stewart family and places over one million cubic yards of concrete annually, ranking it number eight as an ENR Texas and Louisiana Top Specialty Contractor for 2013.

For the Belfiore project, general contractor Ludlow & Associates of Houston selected Keystone as the turn-key concrete contractor to place an estimated 26,200 cubic yards (20,030m³) of concrete upon completion.

Starting with the significant mat pour in early May, to competently handle the pumping, Keystone selected key Putzmeister models just added to their 16-unit fleet. This included a new 56Z-meter truck-mounted concrete boom pump, recently introduced by the manufacturer. The model was needed for its long 180' 10" (55m) boom reach on the mat pour; however, the unit's five-section Z-Fold boom will offer great flexibility by maneuvering its arm sections exactly where needed to pump the lower floors of the high-rise before a placing boom is installed.

The third unit assisting with the mat pour was the largest boom pump in the Houston area, the Putzmeister 63Z-meter, supplied from the fleet of Hi-Tech Concrete Pumping Services, LLC. The model, capable of reaching 207 feet (63m), also offers a high output .20H pump that can deliver up to 260 cubic yards an hour (200m³/hr).

To avoid relocating any equipment, a short amount of delivery line was used to reach a far corner of the mat; otherwise, the three pumps could access all other parts. Each pump averaged over 130 cubic yards an hour (100m³/hr) output, even with the slower receipt of concrete nearing completion.

The concrete, supplied locally by Campbell Concrete & Materials, had a 50 percent fly ash mix to reduce the heat of hydration, and the mixer trucks continuously rotated to and from the job site to feed the three pumps, which placed concrete to a 4.5 foot (1.37m) depth.

Although Keystone utilizes their fleet of concrete pumps exclusively for their own projects, the contractor does at times rely on Hi-Tech for longer reaching boom pump sizes than exist in the Keystone fleet.

“We established a relationship with Hi-Tech a few years ago. The performance and features of their Putzmeister pumps to efficiently handle a few of our key projects helped influence us to switch to Putzmeister equipment instead of staying with the competitive brand we’ve purchased for the past 20 years,” claims Anderson.

“We often use standpipe and system for high-rise work; however, since we recently purchased a Putzmeister MX 34/38Z separate placing boom, we will definitely utilize it instead,” says Anderson.

Again incorporating the latest advances in concrete placing technology on this job is the use of the brand new RS 850 placing tower system, unveiled by Putzmeister at the ConExpo show this March. The tower system, purchased by the concrete contractor for its easy-to-assemble pin connections, a simple floor cut-out and unique self-climbing system, is expected to further improve efficiency as the building progresses upward.

The developers announced plans for the high-rise residential building in June 2013, construction began in early 2014 and completion is targeted for spring 2016. The building is already 70 percent sold.