The Canadian contractor wins a trowel and a Caribbean trip for two. 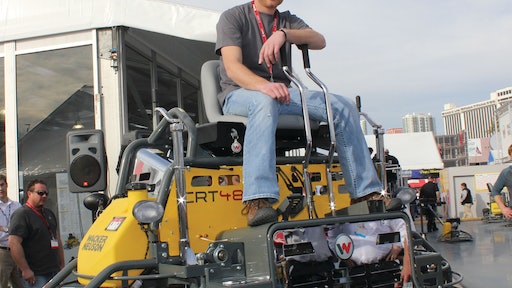 Wacker Neuson's fourth annual Trowel Challenge competition held at the World of Concrete in Las Vegas was once again a popular destination for thousands of attendees at the annual concrete construction show. Each year the Wacker Neuson Trowel Challenge competition gets more popular. This year many past participants and two past winners took to the course in hopes of winning the grand prize: a customized CRT 48-35VX ride-on trowel powered by a special Vanguard Big Block V-twin engine and an all-expense paid trip for two to the Caribbean.

Over 150 trowel operators took this year's challenge held in Wacker Neuson's outdoor exhibit at World of Concrete. The challenge tested the participants' entire range of skills as they maneuvered around an obstacle course on the 2,400-square-foot slab. Preliminary competitions were held Tuesday through Thursday during the show. The contestants with the top 10 fastest times from the preliminaries advanced to the finals held at 1:30 p.m. on Thursday, January 26. The top 10 finalists each had one run through the course and that time was added to the preliminary time.

...and the winner is: Darin Wiebe, Extreme Concrete, Inc., Linden, Alberta, Canada. His combined winning time was 67.428 seconds. Wiebe came into the finals in second place with a qualifying time of 34.312. His final run time was 33.116 seconds. It was a friendly competition between Wiebe and his partner at Extreme Concrete, Jon Baerg. Baerg came into the finals in first place with a qualifying time of 34.084 and with his final run time of 33.553 he was just a mere .209 seconds behind Wiebe with a finishing time 67.637 seconds. For his efforts Baerg went home with a Wacker Neuson CT 36, 36-inch walk behind trowel. The third place finisher was Bruce Gesick, from Slater and Son Concrete, Chico, CA. Gesick finished with a combined time of 70.220 and went home with a BTS 635s portable cut-off saw.

Extreme Concrete, Inc. will benefit from the CRT 48-35VX and Wiebe and his wife Melanie will enjoy a one week vacation in the Caribbean. This year's course was run on Wacker Neuson's World of Concrete 30' x 80' slab that measured at a floor flatness of FF-152. Every year the Wacker Neuson Trowel Challenge competition draws more and more fans to watch the battle between the best finishers in the industry. Thousands of World of Concrete spectators watched the challenge throughout the three days and toured Wacker Neuson's exhibit that showcased a complete line of concrete and construction products.

Do you have what it takes? Take the challenge at the World of Concrete 2013, February 5-8, 2013 in Las Vegas. For more information about the complete Trowel Challenge, please visit www.trowelchallenge.com.

David Ray is the Fastest Trowel at the 2014 Trowel Challenge

Wacker Neuson to Hold Trowel Competition at 2012 World of Concrete

The Husqvarna BG 244 is a gas-powered, walk-behind edger trowel, designed to deliver a smooth, durable concrete surface, specially developed for use in confined spaces and corners.
Husqvarna Construction Products
February 8, 2019