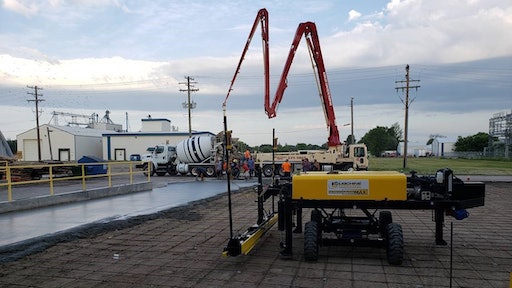 During the summer of 2018, Chad Redlinger, Northern Regional Territory Manager from Ligchine had offered to give a demonstration on the ScreedSaver Max 200. Present at the demo was Winkler Concrete General Manager, Ron Krahn, who had started discussions about purchasing a laser-guided screed.

By August 2018, Winkler Concrete had finalized the purchase of the ScreedSaver Max 200 and Redlinger provided training to the Winkler team on how to operate the laser-guided screed machine.

The ScreedSaver Max 200 was a big reasong Winkler Concrete won a job for a potato storage facility parking lot in Winkler, Manitoba, Canada. Krahn says there were several competing bids for the project.

“Our ScreedSaver Max 200 was a very influential reason Winkler Concrete got this job,” Arthur Krahn, batch operator at Winkler Concrete, says. “Our laser-guided screed allowed one of our contractors to complete the job at a substantially lower cost due to the labor savings. We completed this job in one-third the time with half the crew that this particular contractor would typically use for a parking lot pour such as this.”

While on the job, Arthur Krahn took a picture of the work being done and submitted it for the “Concrete Works Hard & So Do You Job Site Photo Contest.” The photo won the contest.

Throughout the month of November, the winning photo will be highlighted on the Canadian Concrete Expo website, https://canadianconcreteexpo.com/concrete-works-hard/.

MBW's ScreeDemon is one of the most ergonomically-friendly wet screeds on the market.
MBW Inc.
September 15, 2020

Ultimately, it's up to the facility owner to determine how their Defined Traffic or F-min concrete slabs will be constructed. If the owners don’t want corrective grinding in their defined traffic aisles, then the narrow strip construction method is best.
David G. Fudala
Bryan Birdwell
April 23, 2014

According to the company, the Batt Screed is the world’s first battery powered roller screed which not only eliminates exhaust fumes, power cords, and hydraulic power sources, but is designed for quick assembly and break down.
Curb Roller Manufacturing
March 29, 2019

The innovative design of the Eel Screed 6100 allows contractors, rental customers, and other operators to finish concrete screeding faster and more comfortably than alternate methods.
Curb Roller Manufacturing
May 21, 2020

Ligchine Announces New Distributor for the United Kingdom and Ireland

MBW Europe Ltd. will be the exclusive distributor of Ligchine’s line of laser-guided boom and drive-in screed machines for the United Kingdom and Ireland.
Ligchine
January 31, 2020

The SpiderScreed from Ligchine can help contractors become more efficient in screeding concrete. It is designed for concrete placements on upper decks, residential applications, slab-on-grade and 3D surfaces.
Ligchine
November 18, 2019

The updated website provides real-time updates on trends in the concrete screeding industry and access to the latest information on Ligchine.
Ligchine
July 1, 2019

Ligchine's ScreedSaver BOSS 240 is shown working effortlessly around a field of dowel baskets on this site with Relentless Concrete and Toland Smith Construction.
Ligchine
June 24, 2019

With durable steel construction, the Hydra-Screed HS3000 has rubber inserts that can easily be removed to accommodate any length of pipe, custom V-flume, crowned roller screed or other desired profiles. Shown is Seven Valleys using its new machine.
Curb Roller Manufacturing
June 11, 2019

Drive-in screed offers multiple steering modes for maneuverability to the pour and on the pour
Ligchine
January 23, 2019
Follow Us