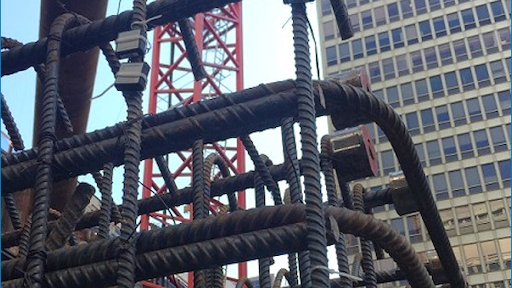 SmartRock is a small wireless “tag sensor” that is attached to the rebar using a simple twist tie. Once the sensor is installed on the formwork, concrete is poured as usual.
Flood Testing Laboratories Inc.

“We’ve been using the maturity method to monitor in-place concrete strength since 1985. The issue has been that we need something that is rugged enough in the field that will withstand the construction atmosphere but also as minimally noticeable as possible,” explains Walt Flood III, principal engineer at Flood Testing Labs. “We’ve tried to minimize the exposure of the sensor to workman so that it doesn’t get in the way. Their operation is going to be the more important operation even though they probably don’t realize how critical the sensors are.”

The Chicago-based construction materials tester has tried many different sensors and tools over the years to combat this issue, from sensors that require you to leave an instrument in the field to monitor data to a wired sensor to a sensor that required a special instrument to download its data.

About four years ago, Flood Testing began a transition to Giatec’s SmartRock wireless temperature and strength sensor. They now exclusively utilize the smart sensor, having used about 3,000 to 4,000 sensors over that time period.

SmartRock is a rugged, mobile-based wireless sensor that is fully embedded in fresh concrete to monitor its in-place temperature and strength during construction. These sensors are installed in the concrete formwork (on the rebar) before pouring to monitor in-situ temperature and maturity according to ASTM C1074. While the logger continuously records the measured temperature of any concrete pour in real time, these results can be analyzed automatically onsite to determine the in-place concrete strength using the free SmartRock app (available for both Android/iOS mobile devices.)

The sensor has been used in a wide range of applications, including:

The biggest benefits SmartRock offers Flood Testing Lab over other technology they’ve used in the past is there small size and wireless capability, which allows them to bury the sensors in the concrete with no wires sticking out.

“Workers don’t have to be careful around them,” notes Flood.

The other benefit for Flood Testing Lab is the ability to access information on the sensors from any smart device through Giatec’s mobile app, meaning they don’t require a special instrument or piece of equipment to read.

“Sometimes we have 6 to 8 projects going all at once where we would need 6 to 8 read-out devices to be able to read the sensors. This has been a very simple solution for us and saves a lot of cost on read-out devices that you would otherwise need,” says Flood.

The elimination of special equipment to read the sensors also gives contractors the ability to read the results.

Your bonus and incentive compensation program can be the key to improving your bottom line or can be a drain on cash flow and employee morale
George Hedley
December 19, 2018
Latest

Aquajet, a global hydrodemolition robot manufacturer, will introduce a new product through a worldwide digital launch at 2 p.m. Central on Wednesday, May 27.
Aquajet
May 4, 2020

NPCA is offering free webinars for the precast concrete industry with best practices for navigating your business through the COVID-19 era.
National Precast Concrete Association
April 28, 2020

Wastewater Tips: When the Stakes and pH Levels are High

Cojali announced its latest updates for its Jaltest OHW Diagnostics and its telematics hardware.
Cojali
March 11, 2020

The second phase of construction at the Dania Pointe development was finished in February 2020.
The Penetron Group
March 3, 2020

Materials testing is still heavily reliant on humans, but cloud-based platforms that communicate directly with break machines are taking us into the future.
Damon Thomas
February 17, 2020

With a complete revamp to the sensor’s design and updated activation and QR code tagging method, this truly wireless, fully embedded device is even more hassle-free, robust and secure.
Giatec Scientific Inc.
February 3, 2020

The Benefits of Technology on the Construction Jobsite