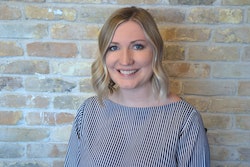 Amy Wunderlin joined Concrete Contractor as its associate editor in 2019, after serving as the assistant editor for sister publications Supply & Demand Chain Executive and Food Logistic.

Before joining AC Business Media in 2016, Wunderlin got her start in the news business writing for several daily and weekly newspapers. She held staff reporter positions at both The Courier, a small community newspaper in Waterloo, Wis., and the Daily Jefferson County Union in Fort Atkinson, Wis. before breaking into the B2B world.

Wunderlin has more than once been described as "observant" or "nosy," something she long ago learned to take as a compliment. In fact, these attributes have served her well as she continues to navigate the new-to-her industry of concrete construction.

In her free time, she can be found cuddled on the couch most likely watching Friends, or if Wisconsin weather allows, on the lake with a good book (and drink) in hand. While she has been a dog mom to her border collie Layla for nearly six years, Wunderlin and her husband proudly welcomed a daughter into the world in August 2019.

Wunderlin is a 2013 graduate of the University of Wisconsin-Whitewater, where she earned her B.A. in journalism.

Follow Amy on Twitter for additional industry updates and insights. She can be reached directly at awunderlin@acbusinessmedia.com.

A tight timeline and a unique shape made this project one for the books.
Amy Wunderlin
April 15, 2020

Strength in consumer spending and the labor market suggest the concrete industry can expect another strong year—though its biggest challenges will also remain.
Amy Wunderlin
February 25, 2020

OSHA Silica Rule: Where Are We Now?

Enforcement for the construction industry went into effect in 2017, but there is still room for improvement.
Amy Wunderlin
February 18, 2020

Muddy, wet and icy walking and working surfaces contribute to higher rates of injury during the winter months, but these types of accidents are preventable.
Amy Wunderlin
January 27, 2020

Federal agencies are required to adjust penalty amounts for inflation each year based on the Consumer Price Index.
Amy Wunderlin
January 22, 2020

The Benefits of Technology on the Construction Jobsite

How to Take Advantage of the Concrete Delivery Ticket

Understanding the delivery ticket can help contractors solve problems before they ever arise.
Amy Wunderlin
December 5, 2019

The one-of-a-kind saw attaches to a skid steer and is compatible with any diamond saw blade.
Amy Wunderlin
October 25, 2019

3 Biggest Disruptors in the Construction Industry of the Future

The winners and losers of next-generation construction will be defined by how well they adapt to several emerging trends.
Amy Wunderlin
August 16, 2019

Sustainability Must be on the Forefront for the Concrete Industry

The time has come for the industry to adopt a viable solution for limiting emissions.
Amy Wunderlin
August 15, 2019

Knox Concrete Finds Its Niche in Curb and Gutter

After investing in Power Curber’s curb and gutter machine, the Idaho-based contractor is taking its business to the next level.
Amy Wunderlin
August 15, 2019

How to Close the Maintenance Gap Between Contractor and Custodian

Maintenance of polished concrete floors doesn’t have to be difficult, so long as it is approached correctly.
Amy Wunderlin
July 18, 2019