A tight timeline and a unique shape made this project one for the books. 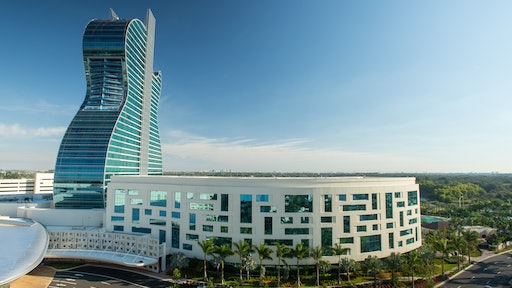 The curves created by the hotel's guitar shape required an advanced design for the sloped columns that now give the guitar its iconic silhouette.
CEMEX USA

The main attraction, however, is the 36-story guitar shaped hotel, reaching 450 feet into the sky. The hotel broke ground in 2017 and officially opened in October of 2019.

“The idea behind the East Tower, or the guitar-shaped hotel, was to create an iconic landmark to represent the Hard Rock’s executive home base in Hollywood, Florida,” says RayC Southern, operations manager, South Florida at Baker Concrete Construction Inc.

“After numerous design attempts, the Seminole tribe decided to proceed with the guitar-shaped structure rather than a rectangular building with a guitar design on the face. The architect firm, Klai Juba Wald, worked with Desimone Consulting Engineers on the design, with three demands in mind: budget, schedule and hotel room count,” he adds.

In order to achieve the silhouette of a guitar, Southern explains that the structure has varying floor sizes to create the narrowing and widening of the structure.

“At each of these curves, most of the exterior columns needed to be sloped by as much as 40 degrees,” he says.

According to Bill O’Donnell, a partner and principal at Desimone, the horizontal forces from the sloping columns create significant thrust loads, which are redirected back into the floor and shear walls with additional thrust reinforcing.

Another design consideration that fulfills the hotel room count demand is the slab thicknesses.

“As the height of the hotel was limited by a nearby airport’s restrictions, that design team attempted to save inches by reducing the slab thicknesses. This was achieved by designing post tensioned slab with enough reinforcing to get the slabs between 9 and 12 inches thick,” Southern explains.

Preparing for an Untraditional Structure

Planning, communication and collaboration between the Baker team members and other key subcontractors was imperative to the success of this project.

Southern adds that the opportunity to collaborate with strong suppliers such as Cemex allowed Baker to remain aggressive with concrete pour times, ultimately contributing to keeping the Hollywood Hard Rock Hotel ahead of schedule.

“CEMEX was honored to participate in this extremely unique project that will quickly become an icon of South Florida,” says CEMEX USA President Jaime Muguiro. “We are proud to have contributed our high-quality materials to another eye-catching structure that will be enjoyed for years to come.” 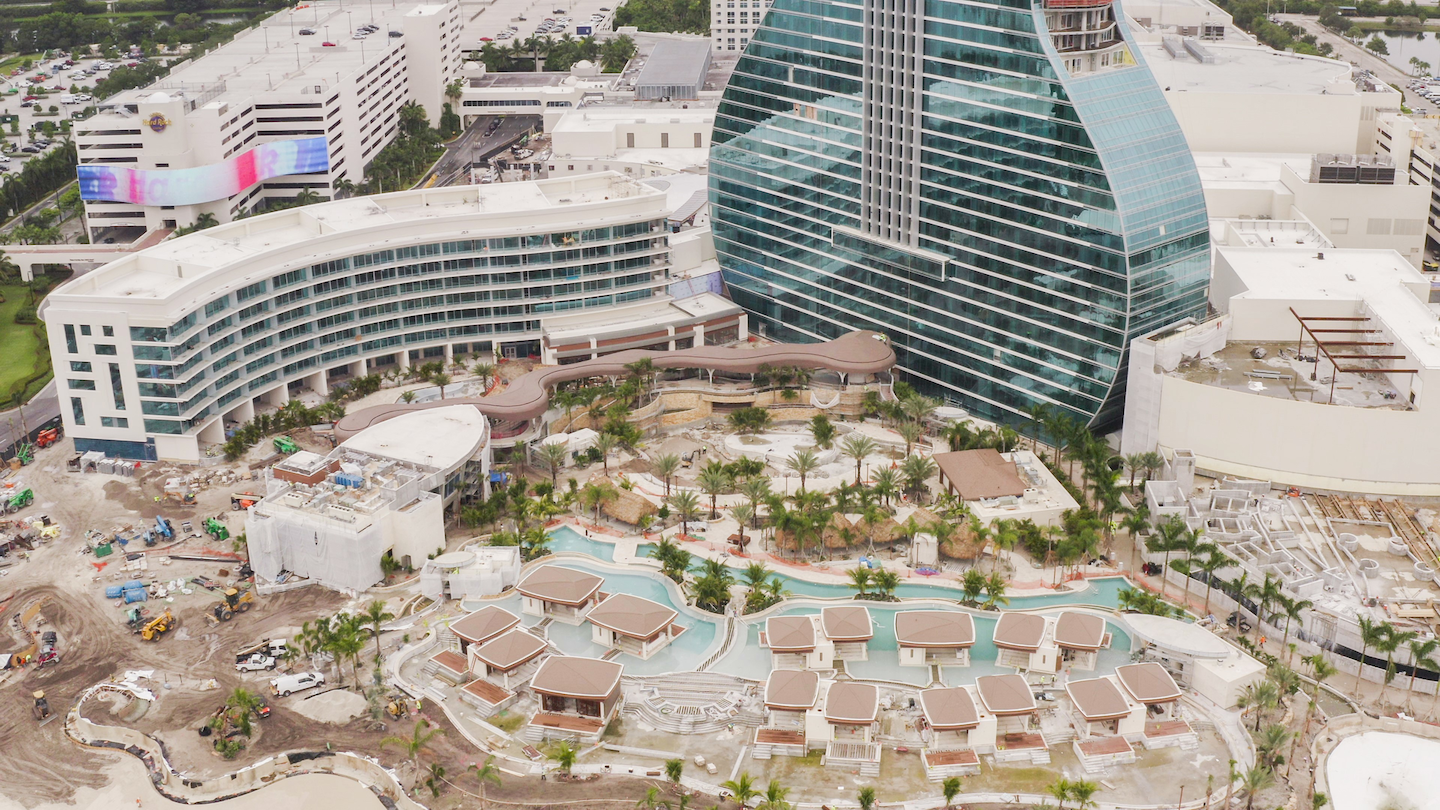 Jeff Bobolts, CEMEX USA Regional President—Florida Region, adds that CEMEX's extensive network and position in Florida is a key element in helping to fulfill the specifications for high-profile and highly-technical projects such as the Seminole Hard Rock Hotel & Casino.

"This project had 10,000 psi columns, it had 7200 psi decks, which in some parts of the country is unique, but for us and for our team in that South Florida area, it's stuff we do every day, so we're very familiar with it. And I think we're a known quantity in that respect to our customers in that market," he explains.

Safety was also a high priority in the success of this project.

“Every morning, the Hard Rock project team and foremen would sit down and begin the day with the morning meeting. The very first thing our team talks about, regardless of what is going on in the world, is always safety on the jobsite," Southern says.

"After safety discussions, our production, quality and schedule goals were reviewed with the foremen. We discussed areas for improvement and set goals. Our team makes sure everyone is on the same page and working toward the same goal, safely. We drive accountability with safety, quality and production no matter how unique the project is,” he adds.

The Hard Rock East Tower was a complex and demanding project due to its tight schedule and unique shape, Southern says.

While it consisted of conventional shear walls, post-tensioned slabs and reinforced columns, Southern says the curves created by the guitar shape required an advanced design for the sloped columns that now give the guitar its iconic silhouette.

“This design required Baker to incorporate innovative construction methods that would allow the sloped columns to remain fully supported during the construction process by using a complex system of cantilevered bracing that would span multiple floors,” he explains.

Baker was tasked with the layout and install of over 180 embeds in each floor, which Southern says required meticulous coordination with other trades to ensure accuracy. He adds that the building’s slab edges were also a crucial design aspect as it guided where the curtain wall system needed to hang and the location of the embeds for anchoring curtain wall panels to the structure.

“These embeds had extremely strict tolerances for each location, and out of all the 7,000 embeds placed in the project, only two embeds required rework, largely due to the iPad technology implemented by Baker,” he says, further explaining that “all drawing changes and coordination documents were controlled and evaluated by the office team and distributed to the field team in real time on their iPads. The teams diligent planning and coordination encouraged speed and efficiency in the field.”

In addition to the structural complexities, the entire Seminole Hard Rock Hotel & Casino expansion had a strict completion date in advance of the 2020 Super Bowl. Southern explains that the tight deadline required the structure’s completion to precede the arrival of the custom curtain wall coming from abroad and was further exacerbated by the delayed pour of the mat foundation and the design’s complexities.

“In order to meet the schedule other innovative strategies were utilized, including the self-climbing form work system for the core walls,” he says. “This method utilized an elaborate hydraulic jacking system capable of hoisting the massive core wall form work without the assistance of the tower cranes. This in turn allowed greater efficiency on the project by freeing up additional tower crane hook time.”

Concrete pumping was also maximized, Southern explains, by mounting a placing boom on the self-climbing core. This allowed the placing boom to be elevated over the form to pour the core, columns and decks from above.

Superior Rigging & Erecting Co., Atlanta, GA, was also involved in the expansion of the Seminole Hard Rock Hotel and Casino. The company used a Liebherr LR 1300 SX crawler crane - which has a loading capacity of 660,000 lbs. with a maximum hoisting height of 554 ft. and a radius up to 377 ft. - to hoist the large 65,000-lb. steel trusses for building the new structure into place.