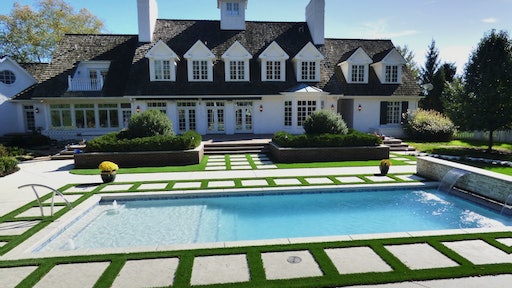 Mike Lindsey has more than once been called a workaholic. Its safe to assume many concrete contractors would likewise fall into that category.

But after almost 50 years in the business, Lindsey is not willing to take on just any project. He sets his sights on jobs that no one else can do.

“There are a lot of people that do stampings and I like to do something that no one else can do or will do. I just like the challenge of it,” he says.

In 2017, Lindsey was challenged with replicating a homeowner's vision for a white limestone pool perimeter with matching walkways.

Why Not White Cement?

Long distances and hot temperatures prevented Lindsey from using white cement to replicate the limestone look on this project. In hot weather, white cement sets up quicker and can be very difficult to work with.

“The homeowners were looking for something white, but due to the temperatures we were dealing with in the middle of summer, white cement wasn’t really an option,” Lindsey explains. 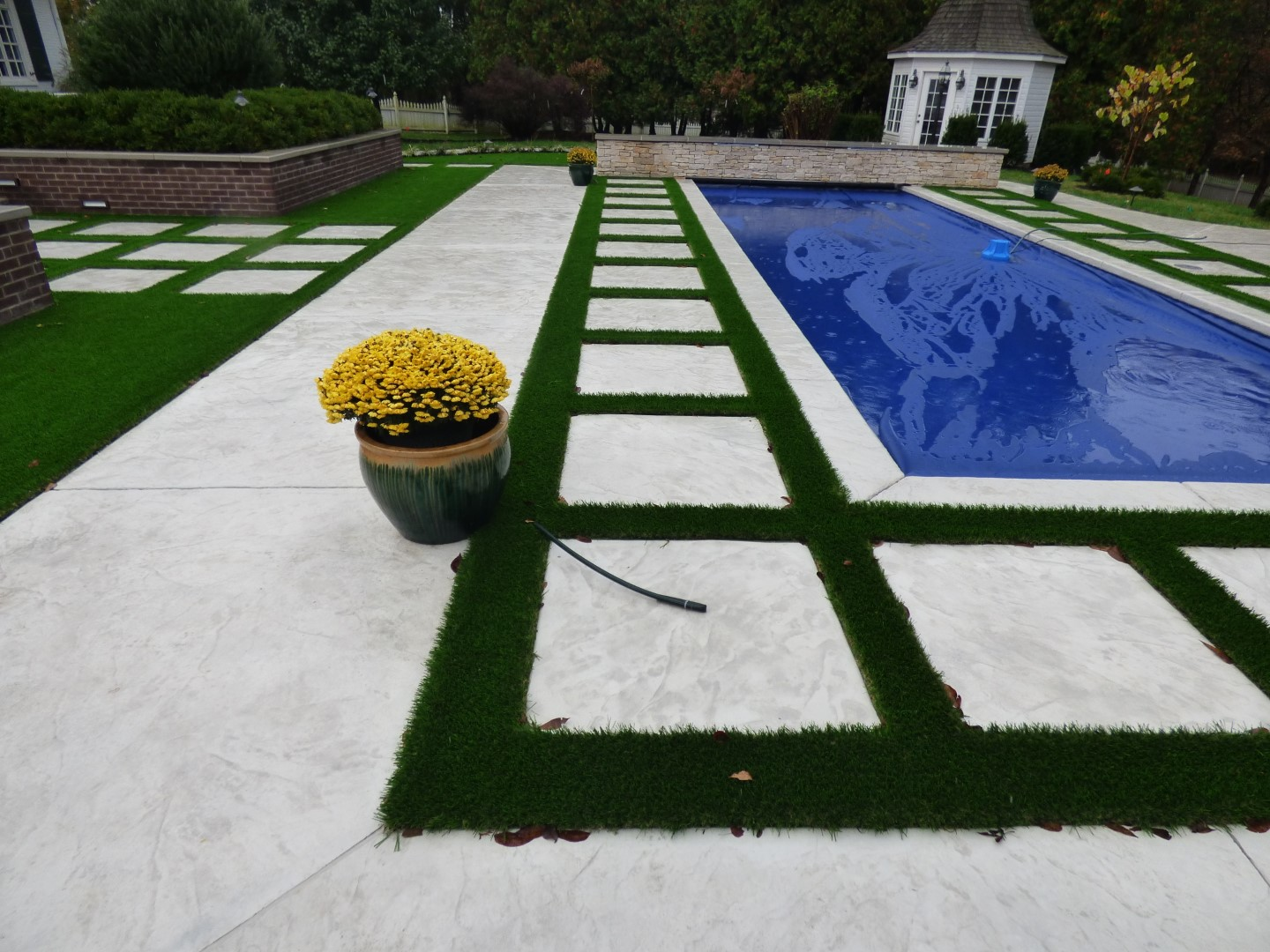 To fulfill the homeowner’s vision, Lindsey experimented with layering an ash white color harder with an ash white antiquing release.

“Even though they are the same color, there is just a hint of difference, which made a modeling in the concrete and gave it the limestone look when we texture skinned it,” Lindsey says.

The travel from the cement plant to the jobsite was also a significant challenge. Because the distance was so great, Lindsey’s crew added chemical reducers to the concrete to slow the setting rate. The concrete also all had to be pumped from pump trucks.

And while Lindsey did not use white cement, the concrete on this project did set a little bit slower than normal. The key, he says, is being able to control your volume. “Try not to exceed your limitations with your help,” he adds.

The Right Man for the Job

The project took about five to six weeks to complete because Lindsey and his crew had to work around the pool contractor. While Lindsey completed all the decorative work, the pool was installed by Grimes Aquatech Pools and Spa of Bloomington, Ind.

“We were assisted by the pool company, and they went out of their way to make everything right for us,” Lindsey notes.

Lindsey has been the pool company’s finisher for several years.

“The homeowner wanted to do something white and then instead of going with just white concrete, Mike came up with this white on white, and it turned out beautiful,” says Rich Grimes, president and owner of Grimes Aquatech Pools and Spa. 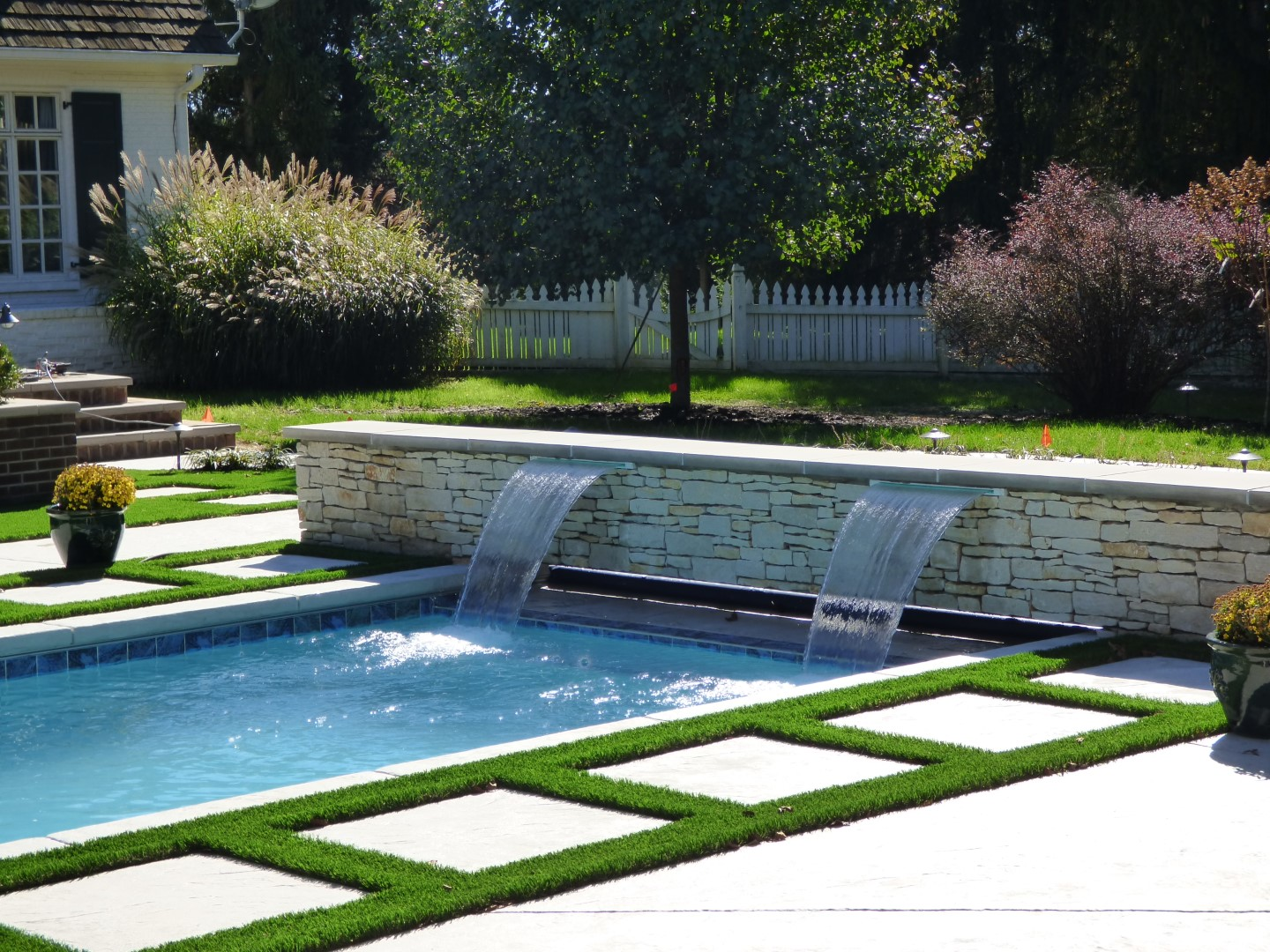 “We had done a lot of whites in the past, but it always had more greys in it. When we presented the design to the homeowner, the customer specifically wanted whiter. Mike said, ‘Well, I’ve never done this, but we could try white on white and do a sample for her.’ And that’s how it came about,” Grimes adds.

Lindsey’s willingness to try something new makes him an invaluable asset to Grimes business. Grimes initially hired him for a pool installation at Indiana University, which is where Lindsey is employed during the day.

“Since then, the reason I continue to hire him is because he's very particular about everything,” Grimes says. “We’re expected to create something special, and I'm only as good as who I hire. This something that if you don't do it every day, you're never going to be the best. He is the piece that gives us the ability to create projects that I don't have to go back and fix.”

Lindsey’s well-trained crew is another reason.

“The problem with stamping is it’s so labor intensive that you can't get a consistent job unless you have adequate people that are trained,” Grimes explains, adding that Lindsey’s crew is like a well-oiled machine. “They all know what they're doing, and they all have a position on that crew that works.”

And while Grimes does all of the structural prep work, he knows that the work of the finisher is essential.

“Everything I do doesn't show, but what he does is the most important thing. If I don't hire the person who can do that quality, then I can't produce the kind of work that we're expected to do. He’s very valuable,” Grimes adds.

While the bright, clean lines of Lindsey’s white-on-white walkways clearly shine, the shotcrete pool is still the centerpiece of the project.

Designed by Grimes himself, his crew first had to remove an old pool and dig 8 feet down to reach undisturbed earth.

“I started with an 8-inch slab. I think it was like 22 by 46 or something to that effect on the bottom when I got to undisturbed earth. And then the pool was actually set on 2-foot sonotubes every 4 feet on center off of that slab,” Grimes explains.

To support the weight of the pool, the slab consisted of a rich mix of fiber mesh and steel. “Obviously a concrete pool with water in it can't move,” Grimes adds.

The design also featured 3-foot by 3-foot squares around the perimeter of the pool. In order to keep them from moving, each one of the squares was poured on 18-inch sonotube, roughly 3-feet deep into the ground.

Artificial turf was also tied into the pieces. “If those 3 by 3 pieces weren’t kept exactly perfect, the turf that we tied them to would have ripped or wrinkled,” explains Grimes.

The use of individual sonotube for the entire pool deck, Grimes says, sets this installation apart from other jobs he has completed.

“We used 6-inch pylons every 6 feet on center for the rest of the deck, which we do frequently here because we're never on level ground; Indiana's always on a slope. You've got three different systems there that are holding this basically 8 feet above the original, so what really made that project unique is the fact that there was so much structure that held that in place,” Grimes concludes.

Make An Impression In Stamp Work With Color Combinations

Firmitas, Utilitas, and Venustas: A stamped concrete floor just may be the perfect decorative accent on your next project.
CT “Chip” Marshall
March 2, 2018

These patterns are expertly fashioned from pieces of worn wood plank and end grain pavers arranged in a variety of patterns from Running Bond to Ashlar to Basket Weave.
Butterfield Color, Inc.
March 21, 2017

The contest is free to enter, and is open to any Contractor, Architect or Designer who uses or specifies Scofield Systems. Projects are judged on skill of installation, creativity, artistic expression, and integration with the overall design intent.
L. M. Scofield
February 7, 2017

Concrete Stamping Brings Textures of Ancient Greece to the Carolinas

Stone textures originally taken from the pathway leading to and from The Parthenon in Athens, Greece transforms the entry way to the Greek Orthodox Church of the Annunciation in Winston-Salem, North Carolina.
Aaron Szerletich
March 4, 2016

Patterned Concrete: The Value of Being Backed by a Brand

Founders of Butterfield Color talk about how their history as decorative contractors informs and improves the way they make and market colorants and other decorative-concrete supplies
February 9, 2015

Rachel Bruce is teaching contractors to stain great designs on slabs without requiring a high degree of artistry
February 9, 2015

This video of the stamping process gives a brief explanation and demonstration of the use of Uni-Mix Integral Concrete Colorant, Perma-Cast Shake-on Color Hardener and Perma-Cast Antiquing Release with Butterfield Color stamping tools
April 19, 2013

One Grand Prize winner and eight finalists were chosen in the annual awards competition.
April 4, 2013