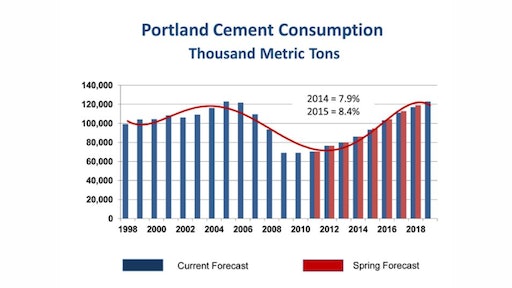 Driven by healthy gains in the economy and most construction segments, cement use will grow 7.9 percent in 2014 followed by increases of 8.4 percent in 2015 and 10.7 percent in 2016, according to the latest Portland Cement Association forecast.


“The pace of cement consumption has clearly strengthened from earlier in the year.”

“Unlike the spring forecast, there is considerable evidence that the economy’s growth path has strengthened,” says Sullivan. “This growth is based on strong underlying fundamentals. The labor market has generally recorded strong gains in net new job creation. Consumer debt to household income is extremely low. And consumer wealth has increased due to stock performance and rising home prices.”

“While there is concern that the economic growth dynamics have changed as a result of the recession, there are also ample reasons to suggest the economy has weathered the healing process and is just now beginning to transition to a stronger growth plateau,” says Sullivan. “Keep in mind that the recession  generated  tremendous pent-up demand, which will add strength to economic growth rates going forward.”