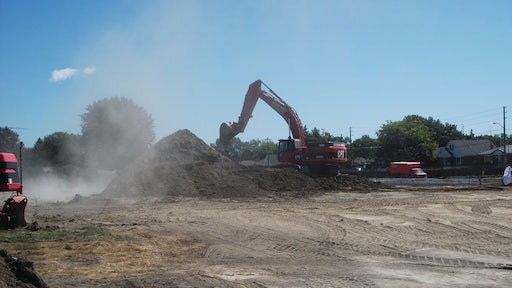 Cozza Bros. had to excavate the foundations for two structures being built on the 96,000-square-meter site as well as complete grading for the buildings’ landscaping and parking lots.

Grading a 96,000-square-meter construction site with a small crew of only five employees

Maple Reinders of Mississauga, Ontario, was the design-build general contractor on the project.  Another contractor performed the stripping and pre-grade work on the former agriculture site. They also completed the grading for the two building pads in preparation for the foundation work, which was finished by Cozza Bros. Excavating Ltd., based in Pickering, Ontario. The shallow-trench foundation excavation work was a $500,000 (CAD) project.

“The Bulk Barn site was old farm land, so we were working with soft soil that was muddy from the wet weather we had had for several months prior to our start,” said Tony Cozza, co-owner of Cozza Bros. Excavating. “We also had a challenging timeline, since other subcontractors were dependent on us getting our part of the project done - and done accurately.”

The project for Cozza Bros. was to excavate the foundations for the two structures being built on the 96,000 square-meter site.  Additionally, the contractor completed grading for the buildings’ landscaping and parking lots. The approximate total amount of soil moved on the project was 30,000 cubic-meters, with 15,000 cubic-meters stockpiled for future developments in the area.

“Our task was to dig a linear perimeter foundation trench measuring exactly 1.2 meters deep and 0.6 meters wide for both buildings,” Cozza stated. “Topcon technology helped us save time and money. Since we didn’t need surveyors we didn’t need to set up one single survey stick or crosshairs anywhere on the site.”

Cozza Bros. had five of its approximately 20 total employees assigned to the project.

The dozers used on the site were equipped with Topcon 3D GPS+ machine control systems which features real time cut/fill mapping, allowing the Cozza Bros. machine operator to move the material once.

Cozza Bros. also used Topcon GR-5 GNSS (Global Navigation Satellite System) receivers for both the base antenna and modular field rover. “We had very little rework on this project, thanks to the advantages of machine control,” Cozza said. “The color touch-screen control box displays blade position and the 3D site design.”

Cozza Bros. used Strada Survey Inc., Vaughan, Ontario, to build the 3D site model for the Bulk Barn project. All the Topcon-guided machines on the site had GPS/GNNS real-time access to the site model and the progress being made on the project.

“The only way we were able to provide competitive pricing to win this Bulk Barn job is because we knew that, with a small crew, we could be fast and accurate running machine control,” Cozza said. “With our Topcon technology, we knew every time one of our machines touched dirt it was done with purpose and accuracy. You can’t ask for more.”

When asked how the project would have gone without the use of machine control technology, Cozza said, “More time, more manpower, and more Tylenol!”