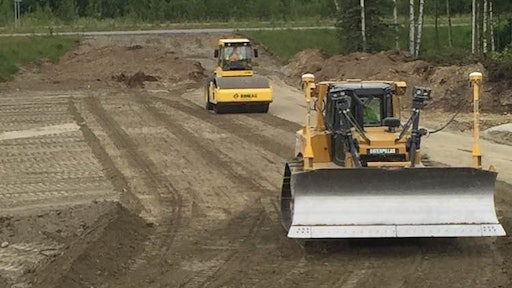 Big Dipper Construction Inc. (BDC), Wasilla, Alaska, was started in 1981 by father and son team Jack and Paul Minnick. It originally focused on smaller scale construction projects, particularly site development work for residential properties. As it has grown, the team has taken on larger-scale commercial projects throughout the region.

In early 2015, BDC won a bid to build the Joe Redington Sr. Junior-Senior High School in Alaska's Mat-Su Valley. The scope of work involved everything prior to paving and concrete work. This included clearing 26 acres of land, moving 300,000 cu. yds. of dirt, site prep before setting the footings and grading. The company also won the bid to run all of the underground utilities outside the building, as well as excavation for the interior utilities and electrical.

With assistance from a model builder and using Business Center - HCE, the BDC team developed a 3D model of the Redington school site. They loaded the 3D design model into a control box inside the dozers and excavators, which shows 2D and 3D profile information and grade guidance for machine operators.

“The high school project gave us a great opportunity to really jump all in with GPS and machine control. And while our guys were a little hesitant at first, after a few days they really got into using GPS,” says Corey Gensemer, superintendent for BDC. “We set up our jobsites by putting the model to the finish grade. The operators know their sections just by selecting the correct job on the control box; that way, there’s no confusion each day about the work ahead. And when things change, we just go in and make an update to the design file and the guys can see it directly.”

The team used Business Center - HCE as the central hub for running multiple projects. Working from a laptop in the truck, project managers can tweak construction models and send updated design files directly to machine operators. Users can transfer and manage field data to and from the Trimble rovers and perform data preparation for the grade control and site positioning systems, all working from one system.

“We could be working on four jobs at the same time, and engineers are constantly changing the design on something, especially on the site work we do,” says Gensemer. “Now, we can take the design file out of CAD and plug it into Business Center - HCE. If we are not on the job that's changed, we just call the operator and say, ‘I just sent you the new design for that sidewalk.’ He can sync the new file to his control box, and then he has the most updated design file right there and he’s ready to go.”

For the Redington project, the team used site positioning and machine control for a 32-ft. cut on a hill. Crews were able to remove the material from the cut and place it precisely to build the parking lot, eliminating any guesswork or rework.

“When you do that large of a cut without GPS, you would usually put a dozer operator where the dirt is being placed and he basically guesses at the grade he’s hitting,” says Gensemer. “Now we can place the 12-in. lift of dirt perfectly flat all the way across and it is compacted 100%. Once that lift is done, we’ll add another lift all the way up. Now, instead of an operator guessing if the dirt is flat, he uses a GPS all the way to 3 ft. below where he’ll start catching grade and he’ll switch over to the finish grade model in the control box. From there, he can cut to grade and it’s right on target.”

Gensemer estimates they finished the cut in half the time it would have taken using conventional survey, excavation and grading methods. It also saved approximately $20,000 in staking and survey costs.

“The technology saved us approximately 50% of time and a significant amount of money on the Redington project,” he says. “We don't have to budget for a grade checker for 10 hours a day, six days a week. Also, we know that we complete the floor of a building in half the time with either the laser dozer or the GPS dozer, which is a huge money saver and competitive advantage.”

At the peak of the school project, BDC had 12 crew members working the site and ran five rock trucks to support the bulk earthmoving effort, moving close to 10,000 cu. yds. of dirt per day. It also dug the footings for the 30,000-sq.-ft. building, plus excavated and cut to grade the football field, baseball field and track.

BDC worked only during the summer months from March 2014 to August 2015, yet was able to complete the job a full four months ahead of schedule. Because the project was completed ahead of time, the school district was able to accept students for the Fall 2015 school year.

This success on the Redington project helped BDC secure another school build for Iditarod Elementary, a 39,000-sq.-ft. building in Wasilla. It was also hired to build Midway Industrial Park in Wasilla, a Panda Express and a complex with commercial space for Krispy Kreme and Best Buy. In addition, the company is working on a children’s fun center that will require laying 1,400 ft. of utilities.

BDC has now grown to 18 employees and has earned the reputation as a skilled contractor with earthworks and site work experience. While the company started by renting most of its heavy equipment and relying on its backhoe and dozer, it has since bought two dozers and a grader and loaded each with grade control. It also has plans to secure another Trimble rover for site positioning and a second excavator with machine control.

“With Trimble GPS, laser and 3D capabilities we are showing that we can successfully manage large projects and still cut our time to completion by at least 25% to 50%, which makes us much more cost effective and competitive,” says Gensemer. “Redington High School was the first job we did with that main contractor and everyone was amazed that we were able to work so quickly and achieve grading accuracy within 1/100th of a foot in some cases.”

Grade Management Path provides customers with the options and flexibility they need to add grade management to their business, whether they are looking at this technology for the first time or interested in upgrading to a premium solution.
JOHN DEERE
March 16, 2020

Formula 3 driver James Roe Jr. will speak daily about his experience with tracks before and after being paved with Topcon SmoothRide
Topcon Positioning Systems
February 28, 2020