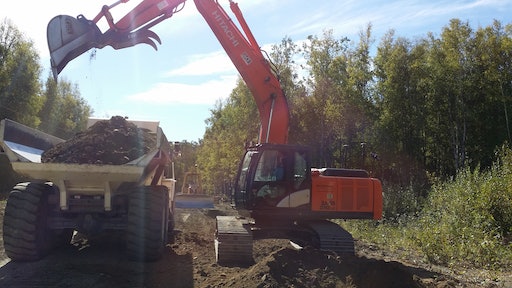 For most people the acronym, JSCCR, is a definite puzzler. What it stands for is Juniper, Spruce, Cranberry, Cottonwood, and Rose, which are the names of the roads in a heavily-wooded residential subdivision located in the Matanuska-Susitna Borough in southern Alaska, not far from Palmer, AK.

In 2014, the Matanuska-Susitna Borough committed to fund an upgrade of the JSCCR Subdivision roads. The Subdivision is roughly square shaped and encompasses approximately 200 square acres. The country dirt roads within the JSCCR  Subdivision are laid out in a grid pattern. The Borough’s plan is to have the roads brought up to the Borough standard of asphalt-paved roads.

The JSCCR Subdivision upgrade is on a two-year plan. The objective for year one is to raise the embedded dirt roads to grade and then let them winter over so that in year two they can be paved.

Valley General Construction LLC, based in Palmer, won the $350,000 contract for the first phase work. Valley General was founded in 2007 and is considered a small-size excavating and grading union contractor with its six to eight employees. The company owners have more than 80 years combined experience in the construction industry. Roadwork and commercial projects are the bulk of the business Valley General engages in within its local radius, although with Anchorage being a mere 40 miles (50 km) or so away via the Glenn Highway, the company does complete projects in the big city area.

“Since the roads are embedded below grade, there have been major drainage problems,” stated Brian Hooks, project manager and co-owner for Valley General Construction. “We needed to not only bring the road up to grade but build in a culvert to address the water run off.”

The network of roads within the Subdivision became an engineered project. The Borough’s engineers produced CAD drawings with the 12-foot-wide roads, three-foot-wide culverts, and cut-ins for 50 driveway approaches.

“I took the engineers’ drawings and used Topcon MAGNET Office Site to create a site model and files that could control the excavator and dozer we used on the project.” Hooks said. “We knew the project would benefit from our use of GPS machine control.”

Hooks is no stranger to machine control technology.

“About six years ago, I took an introductory class on GPS machine control through my local union hall,” he said. “A couple weeks after that I bought a simple system on Craig’s List.”

With the machine control system purchased online, Valley General was able to see tangible benefits of improved productivity. There were also frustrations because the system was not capable of accessing the GLONASS satellite system, which meant it was restricted to the available GPS coverage or the L1 C/A signal.

Hooks hooked up with GPS Alaska Inc. based in Anchorage and received additional training and help selecting a more robust system for the company’s CAT dozer. Valley General purchased the Topcon 3D-MC2 machine control, which is designed to access all satellites and provide position updates up to 100 times per second. The 3D-MC2 sensor combines a gyro, compass and inertial sensor to measure the X, Y and Z position as well as the roll, pitch, yaw and acceleration of the dozer. The Topcon system can access both GPS and GLONASS satellites, which meant that Valley General has access to more than double the number of satellites.

The machines were used on the approximate one-mile total of roadwork on the five streets in the JSCCR Subdivision. The embedded roads were already several inches below grade. Excavation will bring each road to a uniform 10-inches below grade before lifts of fill soil, crushed stone, and a binder-layer of reclaimed asphalt pavement (RAP) are added. Once completed, the roads will winter over until next spring. Alaskan winters are long so the Borough wants to adjust the roads after the several freeze-thaw cycles that can occur during a winter season before a finished asphalt surface is paved.

“We completed in two weeks,” said Hooks. “It went well because we have machine control technology. Our accuracy is spot on, so we’ve eliminated wasted time with rework.

"Our machine operators can literally go out onto the job and know, by looking at their monitors, what needs to be done," Hooks continues. "The project is stakeless, so we don’t need surveyors or have delays when a stake is run over. Plus, we also eliminated the need for a worker to walk along with the excavator for spotting and checks.”

It's been estimated that the JSCCR Subdivision project would have taken twice as long to complete without the use of machine control technology.

“We’ve been using the technology for so long, it’s hard to imagine running a project without it,” stated Hooks. “In fact, if someone took it away, people would walk out the door…probably, following me. It’s that important.”

Valley General’s work in the JSCCR Subdivision has successfully been completed. Officials with the Matanuska-Susitna Borough are happy with the results.

When asked what he remembers most about the project, Brian Hooks said: “I’ll always remember this being our first project using machine control on an excavator and how easy it was, and how it saved us on needing a walk along worker. And I’ll remember how good the roads looked when we left the subdivision ... we did nice work there.”

Using a camera mounted on the outside of the machine, operators can view 3D models in a real-world environment at a true-life scale, in the context of existing surroundings.
March 10, 2020

Version 2.0 includes new features for all machine types, along with the release of the Trimble Earthworks Assistant App for in-cab learning material
Trimble Navigation Ltd.
March 10, 2020

New Autonomous Drones Being Tested for Mapping Without GPS

A group of MIT students has developed autonomous drones that can communicate and map GPS-deprived environments
November 12, 2018