US Economy Expands at Slowest Pace in Three Years 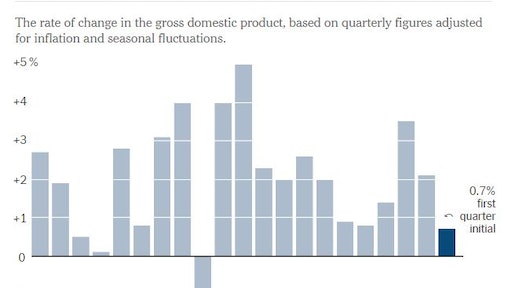 The U.S. economy in the first quarter of 2017 grew at its weakest pace in three years, as consumer spending and business inventory investment both fell short of forecasts.
New York Times graph of US Commerce Dept figures

%The U.S. economy grew at its weakest pace in three years in the first quarter as consumer spending barely increased and businesses invested less on inventories, in a potential setback to President Donald Trump's promise to boost growth.

Gross domestic product increased at a 0.7% annual rate also as the government cut back on defense spending, the Commerce Department said on Friday. That was the weakest performance since the first quarter of 2014.

The economy grew at a 2.1% pace in the fourth quarter. Economists polled by Reuters had forecast GDP rising at a 1.2% pace last quarter. The survey was, however, conducted before Thursday's advance data on the March goods trade deficit and inventories, which saw many economists lowering their first-quarter growth estimates.

The pedestrian first-quarter growth pace is, however, not a true picture of the economy's health. The labor market is near full employment and consumer confidence is near multi-year highs, suggesting that the mostly weather-induced sharp slowdown in consumer spending is probably temporary.

A measure of private domestic demand increased at a 2.2% rate last quarter. First-quarter GDP tends to underperform because of difficulties with the calculation of data that the government has acknowledged and is working to rectify.

More from CNBC on the state of the economy.

Hampered by perennial residential seasonality issues and one-off items, the first quarter of each year in this expansion cycle has more times than not resulted in a lower-than-trend GDP growth performance.

Weakness in Q1 of 2017 centered on much slower consumer spending. After registering a strong 3.5% gain in Q4, real consumer spending advanced just 0.3% in Q1, the weakest annualized pace of growth since Q4 of 2009. This quarter’s one-off factor turned out to be milder-than-usual winter weather in January and February. As a result, consumers did not spend as much on utility services, reflected in the 0.4% rise in Q1 services spending – which averaged 2.7% growth over the past three quarters. Moreover, consumers did not spend the services savings, as goods spending was essentially unchanged on the quarter. Instead, The saving rate rose from 5.2% in December to 5.6% as of February.

Another headwind to overall GDP growth was inventories, which gave back all of its Q4 contribution, slicing a full percentage point off the top line.

On the positive front:

"Since 2000, Q1 U.S. GDP has averaged 1.0% followed by an average growth print of 2.6% in Q2," according to the Wells Fargo Economics Group's analysis of current GDP figures. "Business/consumer sentiment continues to suggest the weakness in Q1 [2017] was not the start of a new trend. On early signs of strengthening consumer spending, resilient BFI and residential construction activity, and incorporating a modest drag from trade, conditions continue to suggest U.S. GDP will rebound solidly in Q2 – our current call stands at 2.9%" 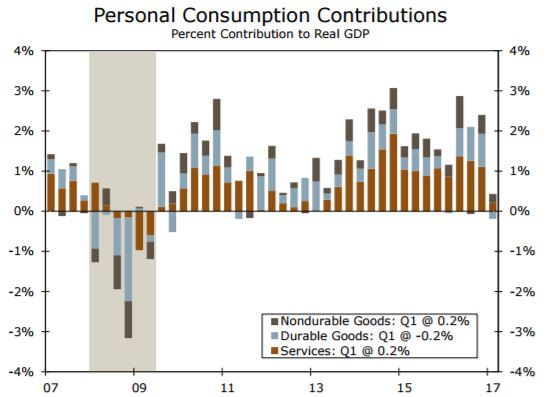 Mild weather in January and February reduced spending on utility services, which held consumer spending on all services to just a 0.4% rise in Q1 (a category that averaged 2.7% growth over the past three quarters).Wells Fargo Economics Group

US Construction Spending Surprised with March Slip after February Record

UPDATED 9/22/2020: The House of Representatives approved by a 359-to-57 vote a resolution that would fund federal government programs beginning through December 11, and extend surface transportation funding legislation through fiscal 2021
AC Business Media
July 2, 2020

US housing construction fell significantly lower than forecast in the first full month of COVID-19 pandemic response, but the builders are already showing signs of resilience
Larry Stewart
May 19, 2020

The rate that weekly initial jobless claims are shrinking may be leveling off at a substantial level, but continuing claims just barely rose
Wells Fargo Construction
May 14, 2020

January US Housing Starts Fall to a Lofty Spot

US housing starts in January fell 3.6%, but their 1.57 million-unit annual pace easily beat consensus expectations and is the second strongest of this expansion
Wells Fargo Construction
February 19, 2020
Follow Us