Detailed safety plans and procedures were put in place to make sure the demolition went off without a hitch and safely for all involved. 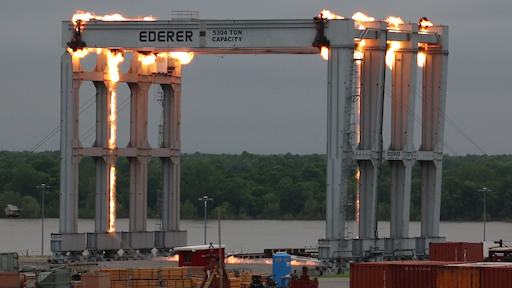 The demolition of a heavy lift gantry crane at the Olmsted Locks and Dam on the Ohio River in Olmsted, IL, started with an intensive amount of paperwork covering all aspects of the scope of work, including engineering, activity hazard analyses, safety issues, a list of products with safety data sheets and more.

Once the paperwork had been completed and approved, National Demolition Association (NDA) member Demtech ordered the necessary linear shape charges and related explosives to complete the project. A start date was agreed upon, Demtech mobilized crew members and necessary equipment, and lined up explosives for the project.

The use of two 135-foot man lifts were going to be used to achieve the pre-burning and loading of explosives on the gantry crane main carrier beams. Before the commencement of their use, the man lifts were inspected by each of the crew members.

Once the inspection of all safety gear and man lifts had been completed, Demtech crew members proceeded up on the man lifts to the proposed cut locations of each of the carrier beams to survey the conditions, ensuring that the cut locations were not interfered by internal bulkhead members. A small inspection hole was cut in the top cover plate of one of the carrier beams to verify bulkhead plate locations.

Accurate measurements were taken for layouts on each of the proposed cut locations. Each carrier beam would be explosively cut off at each end of the beam member several feet out from its anchoring point above the tower legs. 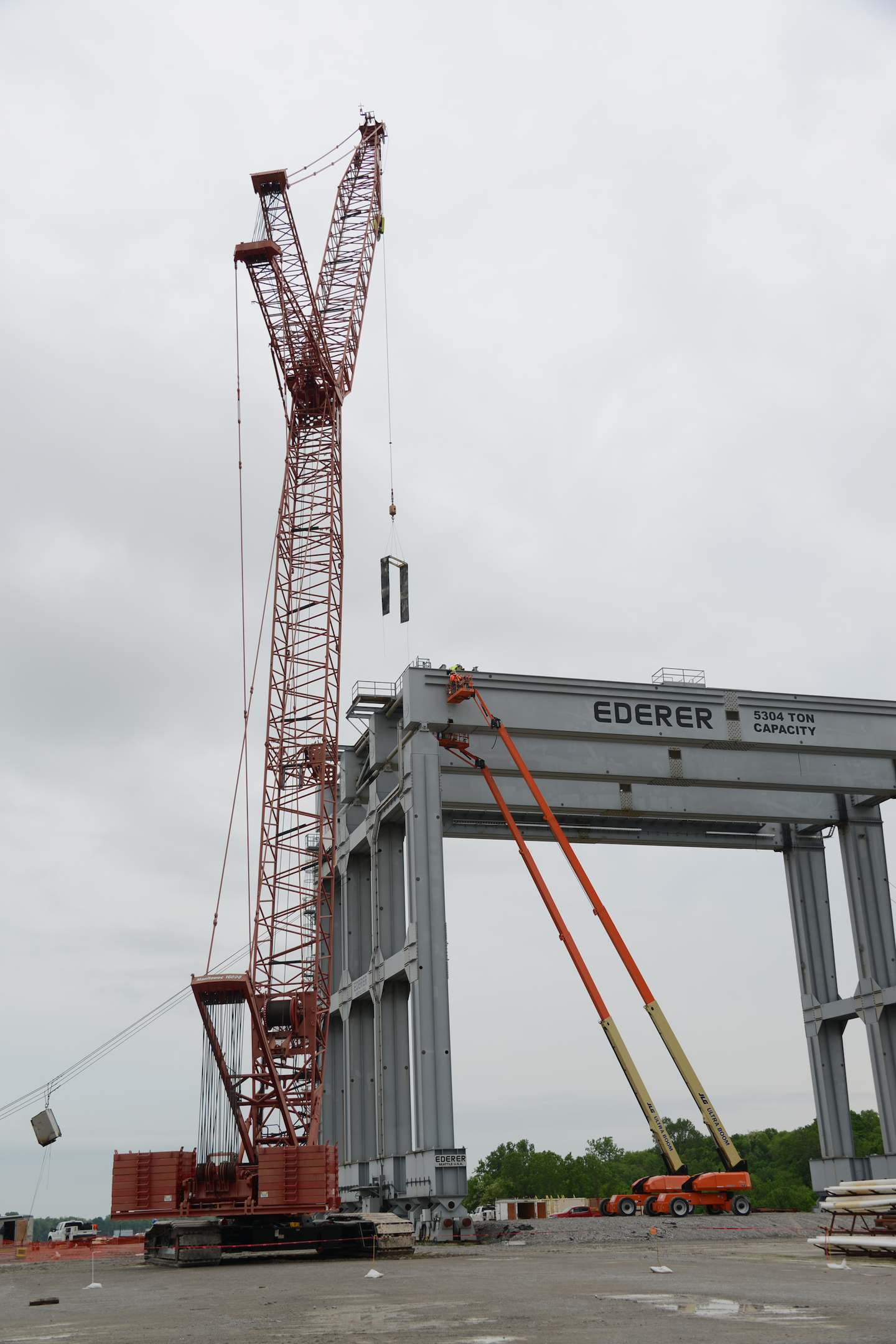 National Demolition AssociationTwo of Demtech’s torch-cutting crew members worked together on the first cut to go over procedures and methodology on performing the approved design cuts on each of the carrier beams. Simultaneously, Demtech crews started the process of attaching and stringing tension cables from the upward portion of the two center crane legs on each side of the gantry crane.

Tension cables were strung through 4-inch lifting ports that had been fabricated for the purpose of lifting the gantry crane legs into position during assembly operations. Tension cables were threaded through lifting port holes and back to a skid plate that had approximately 90,000 pounds of concrete blocks stacked on each of the four skid plates.

Each of the two cables were anchored to one anchor plate. Anchor plates were pushed back into position with the use of two crawler bulldozers. Final tensioning of cables was achieved by heavy-duty ratchet come-alongs. Once all the tensioning cables and anchor plates had been positioned properly, small hanging cables were attached to the tension cables approximately 30 feet out from the anchor point. These cables would be used to hang the 5,000-lb. counterweight units.

During the pre-burning operation, Demtech crews were subjected to several shutdowns related to weather, high winds and one tornado alert causing time delays. High winds were also a factor that started to approach the maximum safety limits of the 135-ft. man lifts. Demtech crews stopped burning operations until the weather passed.

During the pre-burning operation, the blaster in charge and one senior crew member from Demtech visited a neighbor whose residence was just on the edge of the established safety zone. The neighbor and several family members were present. Issues and procedures of how the blast would proceed, warning signals and the installation of a seismograph unit on his property were all addressed.

With the pre-burning operation coming to a close, a certified and licensed Hazmat Demtech driver was dispatched to receive pickup and deliver explosive materials to the jobsite.

Other Demtech crew members were then installing two primary/secondary Primacord loops located above the junction point of the tower legs and carrier beams. Two additional redundant Primacord lines were run from one side of the gantry crane tower legs to the other side. These Primacord strands were secured by tape and magnetic clips and strung through the gantry crane elements to prevent them from getting damaged during any type of weather or wind prior to the blast.

At this point, the blaster in charge was assembling linear shapes charges with required P3 boosters and attached Primacord pigtails. Each linear shape charge unit was assembled with two of the P3 boosters to ensure a redundant and positive initiation of the unit.

Once all P3 boosters had been connected to the initiating loops, a lifting frame with conveyor belting attached was lifted into place, covering the explosive charges location. This belting assembly was utilized to help further control any flying shrapnel produced during the blast event.

With the loading of the explosives, connecting of P3 boosters and belting assembly in place, all members of the loading crew performed a quality assurance inspection, reviewing every detail of the blast location to ensure all aspects were completed properly.

Because the loading of explosives took more than one day, a senior Demtech representative became a security watchman during the non-working, nighttime hours.

On the day of the blast, Demtech’s blaster in charge reviewed all safety and procedural issues of the upcoming event with crew members. Last-minute inspections were performed at explosive charge locations. Two primary Primacord trunk lines were attached to the Primacord loops at each side of the gantry crane and run to the ground to a midpoint between the gantry crane legs. This is the point where the initiating nonelectric detonator would be connected just minutes prior to the blast.

The trunk line was run from the point of initiation between the gantry crane legs and the command and control point, which was located at a pre-approved location on the outer safety perimeter. All nonessential personnel were forbidden to be near or under the gantry crane at this time. 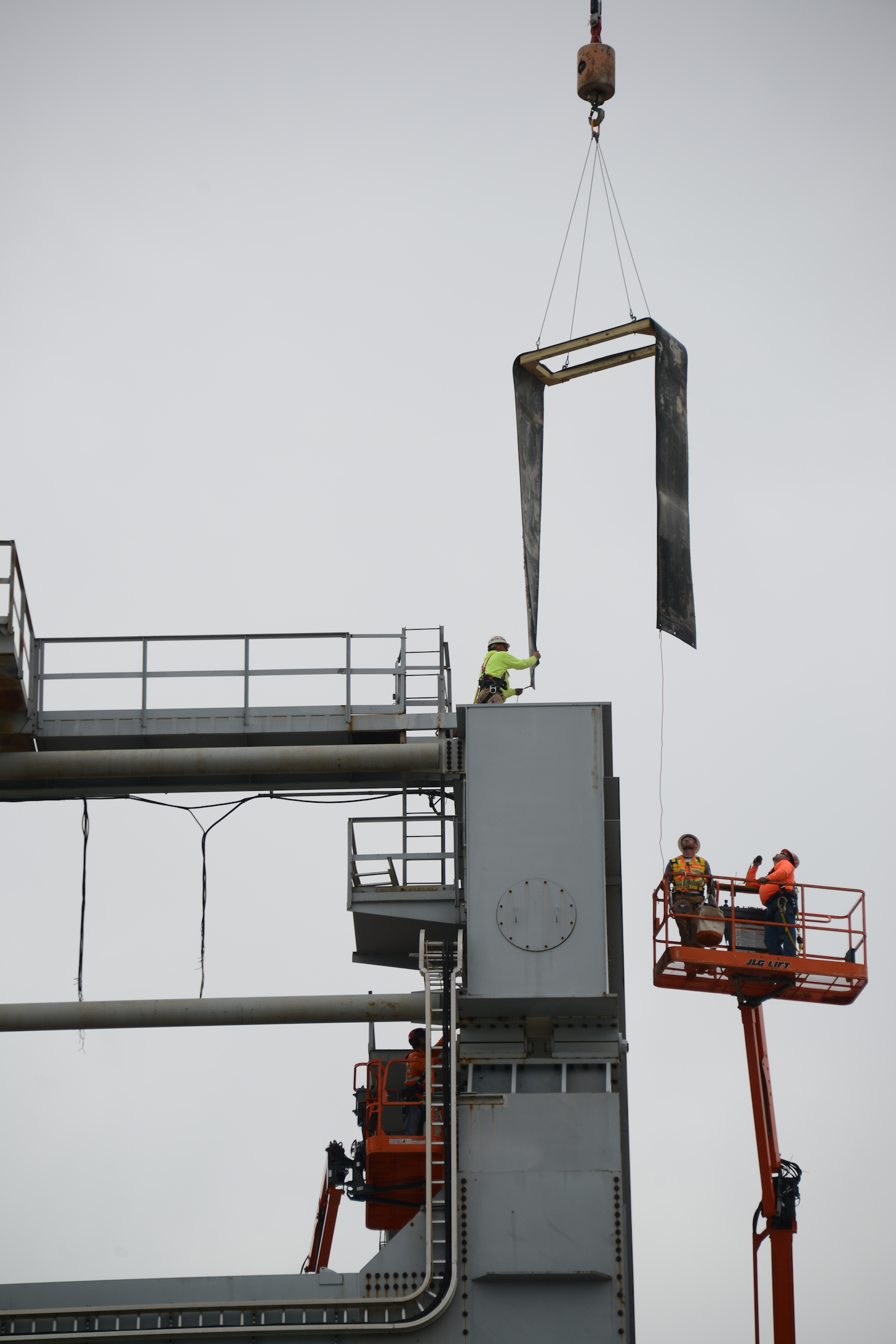 National Demolition AssociationThe blaster in charge, USACE and AECOM essential personnel were present at a procedure, command and control meeting. Issues discussed included but were not limited to:

The blast was scheduled for 5:30 p.m. local time. About one hour prior to the blast, all safety checkpoints were manned. A half hour before blast, safety checkpoints were checked on by radio to confirm all is clear and personnel at those points were all accounted for. All Demtech crew members were sent to respected safe areas except the Demtech blaster, who would attach the detonator to the Primacord trunk lines.

Six minutes before blast, a radio check to all safety checkpoints, reporting back “all clear.” The crew confirmed all seismic instruments and cameras were up and running and seismic personnel were in safe locations.

Five minutes before blast, a warning siren sounded. Approximately three minutes to blast, a radio check to all checkpoints reported “all clear.” The blaster in charge gave the order to “arm the shot” to the blaster at the gantry crane. The Demtech blaster arrived at the command and control location.

A one-minute warning siren was sounded along with an announcement over the jobsite PA system. A final radio check was performed to all checkpoints reporting “all clear.”

The countdown commenced, and the blast occurred. Following the blast, the Demtech inspection team and an AECOM representative proceed to the blast site to conduct a post-blast safety inspection. There were no safety incidents.