Options for Building A Better Base

When is a trench roller or a compaction attachment the better choice? 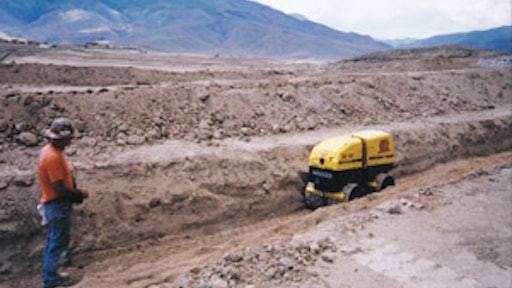 Any time you dig a trench or excavate an area for a driveway, foundation, floor, etc., compacting the soil is an essential part of that task. And since getting a good base is critical to any finished project, it's important to select the right compaction tool for the job.

Trench rollers and carrier-mounted attachments (such as those for excavators or backhoe-loaders) are popular choices for these particular compaction jobs. Both options offer the ability to keep workers out of harm's way by keeping them out of the trench or any area where there is the potential for cave-ins.

Remote and radio control of trench rollers enables workers to operate the machine from a safe distance. "The mobility and wireless remote allow for operators to compact [the soil] while following safety regulations and staying outside of trenches," says Fabian Salinas, Dynapac.

In the case of an attachment mounted on the end of a boom, no one has to enter the trench, minimizing the risk of accidents, adds Carsten Soltau, Stehr Baumaschinen GmBh.

Beyond that similarity, each option offers advantages for a particular application. When evaluating which is right for your job, assess soil conditions, the size of the job and your existing fleet.

Assess soil conditions
Obtaining optimum compaction is critical to any finished project. "The effects of inadequate soil preparation may take weeks or even years to become apparent," says Jay Baudhuin, Wacker Corp. "However, once the results begin to show, the costs of repairs far outweigh the time and costs of proper soil compaction the first time around."

To assess how to complete any compaction project, it's important to understand soil compaction and its characteristics. As it relates to construction, soil compaction is the process of mechanically increasing the density of the soil by packing the soil particles closer together to force out air, explains Al Springer, Allied Construction Products.

"The result is a denser soil that has the ability to hold greater weight," adds Baudhuin.

Mechanically compacting the soil is required because the density of the soil changes during excavation, and some soils become exposed. As a result, their natural ability to support a structure is altered. Mechanical compaction also accelerates the natural process of soil settling and, in some cases, enables construction even on marginal building sites.

Soil is generally classified into two main categories: granular and cohesive. A third category - organic soil - is typically not addressed because it is not compactable and would need to be removed and replaced with imported material.

Granular soils (sand and gravel) are coarse and large enough to see with the naked eye. When they are wet, they may be molded, but will crumble easily. The forces that hold them together are frictional due to their jagged, rough surface texture.

Conversely, cohesive soils (clay and silt) are very small and feel smooth when rubbed between your fingers. When wet, they are sticky and can be molded or rolled into almost any shape. When dry, they tend to be very hard and difficult to crumble. The forces that hold the particles together are molecular in nature.

Properly identifying the soil type you will be compacting is crucial for determining which type of compaction equipment is best for the job.

To optimally compact granular soils, you will need a tool that compacts via vibration. That can mean a trench roller with a smooth vibrating drum or, more commonly, a vibratory plate mounted on a carrier such as an excavator or even a wheel loader or skid steer.

"The vibration action reduces the frictional forces at the contact surfaces, allowing the particles to fall freely under their own weight," says Baudhuin. "At the same time, as the soil particles are vibrating, they become momentarily separated from each other, allowing them to turn and twist until they can find a position that limits their movement."

Cohesive soils are best compacted with a static, or impact, force that kneads and compresses the soil, explains Springer. A trench roller or compaction wheel with a padfoot, or sheepsfoot, design works best in these conditions, since the cleats or "feet" can shear through the material to squeeze out air voids and excess water from between the particles.

Evaluate the size/type of job
Making the decision between a dedicated machine, such as a trench roller, or a carrier-mounted attachment, such as a compaction wheel or vibratory plate, is best determined by evaluating the size and type of job and your existing fleet of equipment.

One benefit of a trench roller over an attachment is that it is highly maneuverable. A trench roller can easily maneuver around objects without the need to reposition a larger machine. In addition, some manufacturers indicate that a trench roller's maneuverability makes it easier to compact long trenches because it can compress soil "on-the-go".

"An operator doesn't have to start and stop a trench roller like he would a backhoe or excavator, where he would have to stop periodically to pack the area within reach of the boom, then move the machine to keep compacting," states Guy Boor, Stone Construction Equipment. "A trench roller is very efficient for trenches and around culverts or areas where you would need to reposition a machine frequently."

However, other manufacturers argue that a boom-mounted attachment is better suited for long, deep trenches, whereas a trench roller works best in short, shallow trenches.

Utility work is well-suited for trench rollers, as are large projects with multiple phases running concurrently, says Salinas. "[Assessing the] efficiency of the job is also critical," he says. "The larger the job, the more easily you can break down individual components into specialized functions. A contractor can then determine whether it is prudent to invest in a [dedicated] machine that may help him accomplish his goal in the specified time period."

There are certain situations, however, where the ability to do more than one job can be an advantage. An excavator or backhoe can serve the dual purpose of digging and compacting. As such, if you already own the carrier, it can be a less costly investment to simply add an attachment rather than bring in an additional machine. And an attachment requires very little in the way of maintenance.

If the width of the trench or excavation is narrow, a compaction attachment may be better suited to the task than a trench roller, says Springer. "That's because trench rollers need wide trenches to accommodate both man and machine," he notes. "But carrier-mounted compactors can work in narrow trenches because it's just the attachment that needs to fit in the trench."

The alternative would be to use a narrow trench roller - for example, Wacker's 23-in.-wide model - that can be operated remotely. This allows the operator to remain outside the trench or work area while the roller is in operation.

A carrier-mounted compaction attachment is also well-suited to deep compaction due to its high pressure per square inch. "It utilizes the weight and down pressure of the carrier to which it is mounted, along with the vibration to achieve compaction in deep, heavy lifts (depths) of material," Springer points out. "The advantage is that the contractor gets the trench compacted faster and the job done quicker."

Whatever decision you make in regards to a compaction tool, don't overdo it. Soil can become over-compacted, which can compromise its ability to support a load. "Continued compaction can cause soil to break down and cause segregation in soil mixes," says Salinas. "This leads to weaknesses in the compaction layers of sub-bases."

To help prevent over-compaction choose a tool with enough power to compact the soil to the depth required without overpowering for the job, advises Baudhuin. "If the machine doesn't have enough power, the proper density will not be reached," he says. "If it has too much power, over-compaction can occur due to too much power on too thin a layer of soil, or an excessive number of passes."

To avoid too much compaction, the soil layer should not be less than one-third of its maximum lift. For example, if the machine's rating is 18 in., it should not be used on a soil layer less than 6 in. deep. Most manufacturers rate their machines and attachments according to lift and the number of passes needed to achieve optimum compaction. In general, you will want the minimum number of passes, and the force to reach the required density.