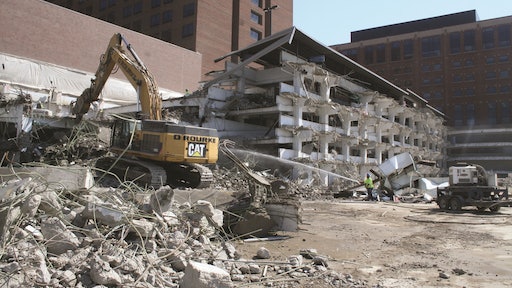 Strict vibration restrictions were a main challenge during demolition of a 5-story parking garage attached to a functioning hospital.

When O’Rourke Wrecking Company won the bid to demolish a massive parking structure attached to Ohio’s Christ Hospital, and strict vibration restrictions came to the forefront, the Cincinnati-based firm was poised to put its tools and skills to work.

Christ Hospital is building a new eight-story 332,000-sq.-ft. Orthopaedic and Spine Center, its first major expansion in more than a decade. The new facility is being constructed on the site of what had been visitors’ parking. Christ Hospital purchased property adjacent to its main facility to build a new 900-space garage.

Taking down a ramp attached to a functioning facility -- mere feet from where life-and-death procedures are being conducted -- added unique challenge to the demolition.

O'Rourke considered a number of approaches: saw cutting, selective demo using smaller machines and a more-traditional mass demo technique using specialty tools. Given the project's constraints, a combination of all these techniques -- with an emphasis on hydraulic attachments -- was chosen.

Though the company has a nice arsenal of attachments it uses on a regular basis, they wanted an additional level of on-site versatility to meet the many demands they knew they would face. With that in mind, they purchased a Genesis Logix Processor 500 for use on a Caterpillar 365C and started working just after the July 4th holiday.

“The LXP 500 was key for us throughout the project but specifically in dealing with the columns mounted to the wall section shared by the hospital,” said Jeff Sizemore, O’Rourke’s project manager. “We did not totally eliminate the use of hammers. We went to smaller units mounted on Takeuchi TB-145 track excavators to chip the columns free. Even with that smaller size, we were first saw cutting the concrete to minimize vibration and avoid any transference of energy to the adjacent facility. Then we came in with the LXP to crack through the concrete, cut the rebar and move on. It was really impressive to see.”

Utilizing all three of the jaw sets -- shear, concrete cracker and concrete pulverizer -- the LXP 500 was the primary tool in bringing down the parking ramp.

“It was that ability to switch between various functions that won us over,” said Sizemore. “Utilizing one tool, both to shear steel and crunch concrete -- coupled with the quick changeability between the two -- was a huge plus on this job.

"Throughout the project we used the LXP on all the heavily reinforced concrete deck slabs," Sizemore added. "Using either the shear jaws or concrete cracking jaws, we were able to break through the concrete and cut the rebar, making that part of the operation fast and efficient.

"At several points, however, we had some bigger bridge columns to contend with, and in that case, the cracker jaw was the answer. It afforded us the wider opening we needed to get around those beams and make the cuts. It was not uncommon for us to change from shear jaws to cracker jaws and back to shears all in the same day -- it fit our needs perfectly."

O’Rourke is no stranger to equipment change-outs. Utilizing grapples and buckets as a normal part of business, they need to move back and forth between those two tools. Working with Genesis, they installed a quick-connect system that Sizemore says has served them well.

“We purchased a couple of Genesis Severe Duty Grapples for this job, and they made a coupling system for us that’s been outstanding. In the past, we were often forced to grab a sledge and beat the pins out to change attachments. Not anymore. Now the operator can quickly change from bucket to grapple with no tools whatsoever. That’s a great improvement for us and has really helped keep production levels up.”

Demolition of the ramp wrapped up in late 2012. The new ramp will be built and open by late 2013, while the Orthopedic and Spine Center is set for a summer 2015 opening.

This week, Jess & Dormie have a lot of infrastructure news to share and also discuss the 10 things contractors can do to make the most out of these coming busy months
Jessica Lombardo
Mar 26th, 2021
Latest

The CB 5500 and CB 7500 are designed for carriers in the 50 to 85 tons weight class and their comparatively light weights make them effective choices for use with high reach or long front carriers.
Epiroc
Mar 10th, 2020

Brad Humphrey and the team discuss all things related to the jobsite and running a successful business. Tune in for a new episode every other Wednesday.
Apr 6th, 2021

Powerscreen is excited to bring back the Phoenix range - one of its original machine ranges to its product portfolio.
Powerscreen - Terex
Oct 22nd, 2019

The three new crushers are equipped with a newly designed pressure booster, which allows them to operate independently of the carrier’s working pressure, resulting in increased speed and crushing forces
Brokk Inc.
Sep 12th, 2019

There are many types and styles of crushing equipment. Kemper Equipment explains how to choose the right crusher for your operational needs.
May 30th, 2019

‘We continue to [diversify to endure industry cyclicality] as we come together with Genesis to expand into the scrap, demolition and adjacent industries’
NPK Construction Equipment, Inc.
May 21st, 2019

How did John Deere improve on its E-Series Articulated Dump Trucks (ADTs)? They simplified. They took powerful, productive, and popular ADTs and made them even more comfortable and easy to use with the introduction of the new E-II Series.
Apr 8th, 2021

Kleemann was awarded two international design prizes: the iF DESIGN AWARD and the GOOD DESIGN Award for the MOBICAT MC 120 Z PRO jaw crusher and the EVO line of screening plants. Safe operation and simple handling were key factors in the award.
Kleemann Crushers
Mar 19th, 2019

Contractors must match demolition attachments to the task and then select the correct excavator for maximum productivity.
Curt Bennink
Sep 14th, 2018

Designed for Cat excavators with operating weights from 11 to 85+ tons, as well as competitive machines of similar weights
Caterpillar - Cat
Aug 13th, 2018

A lower-cost concrete pulverizer attachment has proven both its worth and its durability in chewing up concrete stockpiles.
Jan 3rd, 2018

How did John Deere improve on its E-Series Articulated Dump Trucks (ADTs)? They simplified. They took powerful, productive, and popular ADTs and made them even more comfortable and easy to use with the introduction of the new E-II Series.
Apr 8th, 2021
Follow Us