Precautions for Hydraulic Breaker Use on Compact Equipment

Give extra consideration to a few key points when using breaker attachments on compact excavators and skid-steer or compact track loaders. 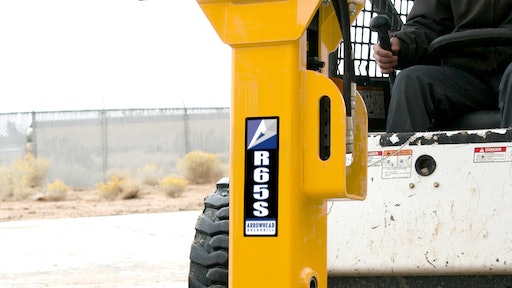 According to Arrowhead Rockdrill, vibration suppression is a key factor when using breakers on compact equipment. Because of the carrier's smaller size, vibration is more noticeable and can potentially damage to the machine.

The same hydraulic breaker operating tips apply regardless of carrier size. However, given their smaller size and lighter weight, it can be beneficial to give extra consideration to a few key points when using breakers on compact excavators and skid-steer or compact track loaders.

“Compact equipment is becoming more prevalent in the marketplace and on the jobsite,” says Rob Sherwin, Arrowhead Rockdrill. “Worldwide, we are seeing a miniaturization of construction equipment. There are still a lot of large excavators, but for general contractors and utility applications, there are certain advantages from a logistical standpoint for using smaller machines, and these smaller machines demand certain things.”

According to Sherwin, at the top of the list is vibration suppression, which is offered on Arrowhead Rockdrill compact breakers (shown at right). “It’s one of the key factors an owner/operator is most interested in when it comes to compact equipment,” he asserts. “Because of its smaller size, vibration is more noticeable. Oftentimes, we’ll hear that operators don’t like to use breakers on smaller machines because it shakes the machine apart.”

Also pay special attention to breaker size, which ultimately relates to hydraulic flow and pressure. “Owners/operators may be tempted to select a less expensive option, which might mean a small breaker,” says Ron Peters, CEAttachments. “If it is too small for the machine, production speed will be reduced and you can damage the breaker because it will put too much hydraulic flow into it. Conversely, too large of a breaker and the machine might not be able to lift the weight.”

All hydraulic breakers use oil to power the attachment. “If the carrier can’t provide enough flow at the right pressure, then the breaker can’t perform with the maximum power, and efficiency is reduced,” notes Matt Franzel, Atlas Copco.

Conversely, too much hydraulic flow can be a problem. “In the compact world, operators frequently switch back and forth between attachments,” says Stephane Giroudon, Montabert. “Make sure the breaker, or any hydraulic attachment, is set up correctly for flow and pressure. If it is too high, you will damage the breaker or other attachment.”

When switching between attachments, it’s also important to clean the hydraulic hose couplers so you don’t contaminate the hydraulic oil, adds Peters.

Refresher on Use and Care of Hydraulic Breaker Attachments

Shares of Epiroc AB started trading on Nasdaq Stockholm in Sweden, marking its start as a fully independent company separate from the Atlas Copco Group
Epiroc
June 18, 2018
Follow Us