Terex self-erector scrambles up to remote location to lift stone blocks to a max. radius of 78 ft. in shoring up and rebuilding ninth-century temple 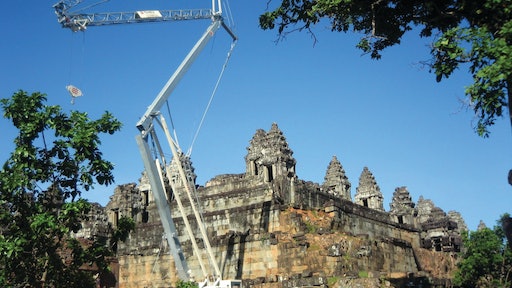 A Terex CBR 24 Plus self-erecting tower crane is lifting stone blocks and other materials up to a maximum of two tons or up to its maximum radius of 78 feet.

Phnom Bakheng is the oldest temple complex of Angkor, Cambodia, dating back to the late ninth century. Over the centuries Phnom Bakheng has suffered the ravages of nature and time. In 2006, World Monuments Fund WMF and APSARA National Authority embarked on a campaign to document the site and develop a conservation program.

Phnom Bakheng – a stepped pyramid-like structure with 60 sandstone towers rising from the corners of its five terraces - was the first and principal mountain-style temple in the region. It was built by King Yasovarman as the centrepiece of his new capital, Yasodharapura, which is now part of the Angkor Archaeological Park in northwestern Cambodia and the home of other magnificent temples of the Khmer empire.

The temple has serious structural issues mainly visible at the terrace corners where walls and shrines have been severely damaged through the shifting of the stones allowing undergrowth and water ingress to erode the structure. Restoration work first started in 2004 when urgent stabilization work to the temple’s collapsed southwest corner was carried out.

Awards to (WMF) by the U.S. State Department in 2007 and 2011 through the Ambassadors Fund for Cultural Preservation allowed long-term conservation including stabilization, repair, waterproofing and partial reconstruction. To help with the restoration, the WMF decided the best way forward was to use a compact and easily transportable self-erecting tower crane for lifting and placing materials.

“When the restoration work increased significantly at the beginning of 2008 we analyzed the type of work that needed to be carried out,” said Ben Haley, WMF communications manager. “Taking into consideration the position of the temple, we decided that a self-erecting tower crane was the answer. After further research, the WMF opted to invest in a Terex CBR 24 Plus which can be erected quickly and easily and allows us to lift the stone blocks and other materials up to a maximum of two tons or up to its maximum radius of 78 feet. And because of the remote position of Phnom Bakheng and the hot, humid climate, having quality components and a fully galvanized structure was a big advantage. Since being installed, the crane has worked perfectly.”

Work was to start at the northeast corner of the temple; however, because of the uneven ground and the presence of a collapsed brick shrine, a substantial raised reinforced concrete platform was constructed to form a solid base for the crane and a bridge over the shrine. The platform is supported by sizable steel beams sitting on concrete pads and had to be strong enough to carry the total 17.76-ton weight of the crane which included 8.46 tons of counterweight.

Once the platform was completed, the Terex CBR 24 Plus was transported up the hill to the temple along a very small and steep pedestrian path that was widened by a locally rented dozer. The crane was then positioned on the platform by building a temporary ramp using sand bags and hauling it up the ramp and onto the platform using two winches mounted to the front of the steel support structure.

Once on the platform, the crane was erected with the help of a Terex technician and then the ballast blocks were self-installed. A small workshop was set up nearby to house a generator and electrical cabling used to power the crane and some small tools. A workshop housing a stone saw used to size and cut new sandstone blocks to replace broken or missing pavers or wall units was also set up.

Following a detailed site survey, the first phase of the work to be carried out using the crane was the restoration of the lower terrace on the northern half of the east elevation. Some emergency stabilization and protection of the surrounding brick shrine structures were also completed.

Any stones that were dismantled had to be numbered before being moved to safe storage areas. All stone blocks in the northeast corner were removed and the exposed bedrock cleaned of soil, vegetation and remains of deteriorated laterite.

Conservation of damaged stone blocks has begun. Original materials are cleaned, repaired as needed and returned to their location. Replacement stone and laterite are utilized to improve stability where necessary.

Rain or shine, your work must get done. Our ADTs are designed to keep you on solid ground. Demo a machine today!
October 23, 2020
Latest
Crane