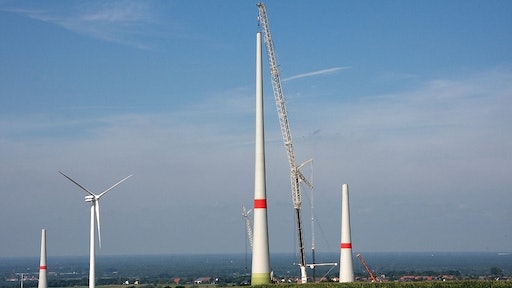 The Terex AC 1000 crane was set up with an SSL configuration, a 207-ton counterweight and a 177-ft.-long luffing fly jib on a 39-ft. variable extension (VA) for erecting five wind turbines in Germany.

The all-terrain crane arrived to the first site in Landesbergen, near Hannover, Germany, carrying its 164-foot telescopic boom. There, the crane had to erect four ENERCON E70 wind turbines with a hub height of 275 feet. Two turbines were erected at one location and the other two at a neighboring one. The maximum weight for each load lifted was 72 tons.

The crane was set up with an SSL configuration, a 207-ton counterweight and a 177-foot-long luffing fly jib on a  39-foot variable extension (VA). A three-sheave hook block was installed with five wire ropes in order to pick up the load with a 44-foot 3-inch outrigger. The AC 1000 required one assist crane to mount its four outriggers, set hoist 0, mount the SSL system, extension adapter and luffing fly jib – the rest was rigged by itself.

“This meant that we were able to set up the huge crane for the first two lifts in no time with only three workers. As for the lifts, they went perfectly smooth,” explains crane operator Reiner Wege. He extended the main boom in three steps for the procedure, starting at 98 feet, 1 inch, then extending to 111 feet, 6 inches and ending at 128 feet, 3 inches.

The AC 1000 showcased its high level of flexibility when it had to move to the project’s second site, traveling a distance of about 1,640 feet with a configuration that included the luffing fly jib’s base, the extension adapter, the superlift system, the mounted outriggers and the counterweight. The crane traveled through an unpaved country road which was meant for tractors.

“Of course we left nothing to chance,” explains Terex Support team member Rainer Staab, who supervised the project on site. “The design engineers in charge calculated the exact load distribution and the road’s load-bearing capacity in advance and gave us the go-ahead.”

For the last two lifts, the crane was placed about 98 feet in front of the wind turbines’ foundation and had to work with a large working radius. Just as in the previous lifts, the machine lifted a maximum total load of 72 tons. Wege was also able to easily handle these lifts with the AC 1000.

“Even though I was already familiar with Terex equipment after countless projects using the AC 500, I was surprised at just how quickly I became comfortable operating the AC 1000,” he says.

The Terex AC 1000 all-terrain crane’s second assignment was at a site in Benhausen, Paderborn, where the Neeb-Schuch team also erected an ENERCON E70 wind turbine. In contrast to the previous assignment, the tower was a concrete structure made up of 22 rings, each one with a height of 12 feet, 5 inches, totalling more than 262 feet. Also, in this case, the maximum weight of the concrete elements was 92 tons. The crane’s superlift configuration was identical to the one in Hannover.

The area for crane set up proved to be tricky as the roads that were prepared were too close to the wind turbine’s foundation. This meant that the AC 1000 luffing jib had to be set up over open, unprepared terrain. Thanks to the small dimensions of its components and the patented luffing fly jib erecting system, the crane was set up quickly and without complications.

The crane was in service for several hours, as the tower’s structure required a large number of lifts.

Get the Most Out of Your Equipment with Performance-Matched Attachments

Check out the Profit Matters channel. Discover helpful tips, articles and more to squeeze the most profit from your projects and improve your bottom line.
October 1, 2020
Latest
Crane