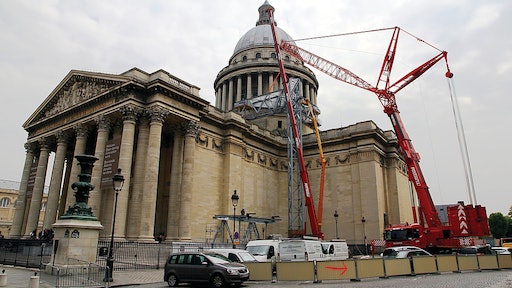 As the Terex AC 700 crane was working all around the Pantheon, the crane operator had to reposition it for every lift.

Restoring the upper structure of the Pantheon – nearly 270-feet high – without using the building for support and while keeping it open to the public during restoration.

France’s Pantheon – which was constructed between 1758 and 1790 – has had its share of wear and tear over the years including pressure on its arches, water seepage caused by leaky joints and corrosion of swelling metal components which has cracked open surrounding stone and compromised the stability of the structure. Now a massive restoration project is underway with the first phase of work schedule for completion in 2015. The first phase includes the upper part of the structure, which is nearly 270 feet high.

In order to repair the upper structure without using the historical building itself as a support, the colonnaded drum supporting the dome will be completely covered by free-standing scaffolding. Paris Echafaudage designed a metallic structure shaped like a kitchen stool which will raise the scaffolding into the air. The four-legged structure consists of a reinforced hoop tightened around the base of the drum. Each of the legs is anchored by micropilons and are approximately 121 feet high. One of the legs will serve as a base for a 315-foot-high tower crane - the Terex AC 700 - which will be equipped with a 138-foot luffing jib and 308,647 pounds of counterweight.

“Obtaining the permits necessary to truck in and install this kind of equipment in the heart of Paris was no easy thing. But it turned out to be the best option for this type of project,” said Stéphane Yorgui from Ponticelli’s engineering office.

Only four weeks were needed to lift the individual structures into their desired positions. The largest of these structural elements were 66 by 66 feet in size, weighed 92,594 pounds and had to be hoisted to a height of 131 feet. To cope with different lift profiles, the team at Ponticelli used the luffing jib and worked with varied main boom extensions and angles.

As the crane was working all around the Pantheon, the crane operator had to reposition it for every lift. This was a major consideration when choosing which crane configuration to use, as the time required to partially dismantle the crane for each reposition would have a big impact on the overall project schedule. With the chosen configuration, Ponticelli’s team needed to only remove 176,369 pounds of counterweight to move the crane, as the AC 700 could be transported fully rigged within the jobsite.

Before each lift, the components of the enormous reinforced structure were laid out on the ground and rigged for the lifts. “These maneuvers demanded the highest level of precision, since the structure was assembled only a few centimeters away from the building. A job demanding patience that left no room for error,” said Dejan Kostovski, the project manager for the scaffolding company Paris Charpente.

After several weeks of methodical planning and four weeks of precise execution, the structure was assembled and ready to be used for the massive restoration project.

Engineered for the most demanding trades in the world, Milwaukee Tool’s MX FUEL line of equipment is powered by industry leading lithium-ion technology batteries that are conveniently interchangeable on all MX FUEL equipment.
October 20, 2020
Latest
Crane