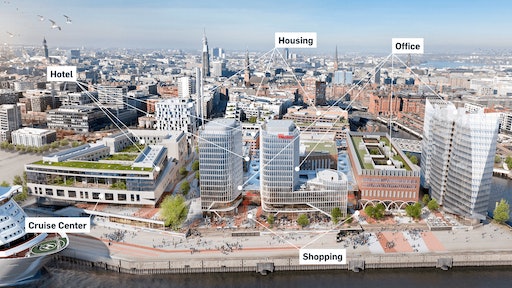 In 2018, a contractor, rental company and manufacturer teamed up to build and restore the Überseequartier district in Hamburg. The companies included Züblin, Feurig and Liebherr. The venture is an integral part of the HafenCity urban development project, which was described as a “cosmopolitan open and urban — a place like no other,” says the Unibail-Rodamco-Westfield.

The purpose of the district project is to connect living and working quarters to the leisure facilities, retail options and entertainment establishments. To execute the scheme, the planning committee designed a state-of-the-art cruise terminal.

Liebherr’s contribution to the elaborate project is 25 top-slewing tower cranes and its Tower Crane Solutions — a combination that will allow for seamless collaboration.

The start of the Überseequartier district project began in 2018 with planning and strategical decisions. One of these preparations was the selection to equip the entire site with only one single manufacturer’s machinery.

The project committee chose Liebherr machinery supplied by Feurig, a rental company located in Hamburg with the ability to supply over 200 rental cranes, meeting logistical requirements.

The project began with 15 well-qualified service technicians for assembly and service work, 14 various types of buildings, and a crane concept involving top-slewing tower cranes. The construction project consisted of office towers, residential buildings, a cinema, an elaborate shopping center and the cruise terminal.

Change in the original crane concept

The original crane concept placed a crane to each individual building, but this became a challenge logistically due to limited space. In all cases, cranes are recommended to be a certain distance form one another to eliminate crane collision, as well as collision with close proximity buildings.

This problem was adverted by the Liebherr Tower Crane Solutions which identified the need for additional cranes, an average of one and a half cranes per building. In addition, the chosen cranes were varied in size with hook heights ranging from about 30 meters to over 90 meters.

The types of cranes included were the 85 EC-B, 172 EC-B and 280 EC-H models. In the end, all 25 Liebherr cranes were instructed to work simultaneously on constructing the new Überseequartier district ­— a plan that was analyzed prior to the start of the project by Liebherr’s Tower Crane Solutions.

The cranes are assembled

On site, the first crane was assembled at the beginning of 2019 with 24 additional cranes following close behind in a simultaneous operation. This collaboration was monitored from beginning to end by Liebherr’s Tower Crane Solutions, a system that provides analyzation, advice and assistance during the entire duration of the project, beginning to end.

The project encountered a predicament that prohibited the escalation of the crane’s height. In this situation, a neighboring chimney needed to be extended by almost two meters and required scaffolding for restoration.

The Tower Crane Solutions analyzed the situation and quickly came to an answer — the shortening of the crane’s JIB — that avoided all problems and allowed for the project to continue without project downtime.

The HafenCity urban development project is a continuous program in Europe that aims to aid urban planning, sustainable development like renewable energy creation, and the protection of infrastructure, new and old, from natural disasters.

The HafenCity has documented planning and construction dating back to the start of 2000. The Überseequartier district, a part of the urban project, is estimated to cost over a billion dollars and consist of 419,000 square meters. A project that is anticipated to be finished by the second half of 2023.

Information provided by Liebherr Cranes and edited by Chantal Zimmermann.

Liebherr Shares Vision and Plans for the Future of Construction Sites

Brad Humphrey and the team discuss all things related to the jobsite and running a successful business. Tune in for a new episode every other Wednesday.
May 11, 2021
Latest