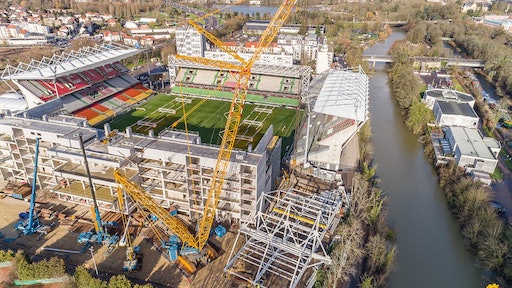 It was certainly a great moment for the fans of FC Metz when the club's stadium's new south stand steel structures, weighing up to 533,519 lbs., were lifted and assembled.

The lift was performed by crane service provider Sarens using its Demag CC 3800-1 lattice boom crawler crane, since it had all the prerequisites to perform the sporting feat. A job that the construction company responsible, Demathieu Bard, together with Costantini, entrusted to Martifer, the manufacturer of the structure.

To make the "playing field" accessible for the Demag CC 3800-1, however, the subsoil at the edge of the stadium first had to be specially prepared.

"With two layers of 7.8-in.-thick Bongossi timber, we provided sufficient support for the crane," says Demathieu Bard site manager, Julien Cavelius, who was impressed by the dimensions of the equipment. "For me, the Demag CC 3800-1 is an absolutely beautiful machine that can be set up amazingly quickly and easily despite its gigantic dimensions. The machine worked precisely and reliably - despite the huge components that had to be lifted.”

The complex ground preparation required the use of 18 truck transports for the necessary materials and 55 transports for the crane itself. "Since we brought eight to 12 transports to the construction site per day, just three Sarens employees using two assist cranes were able to assemble the crane ready for use in five days," says Cavelius.

Once the assembly work was completed, there were two more days for acceptance and testing, making the crane ready for lifting after seven days.

The Sarens team set up the crane in SWSL configuration with a 196-ft. main boom, 118-ft. Superlift mast, and a 78-ft.-long luffing jib for the demanding lifts. The counterweight on the superstructure weighed 363,763 lbs., and the Superlift counterweight up to a maximum of 716,502 lbs., depending on the loads to be lifted. 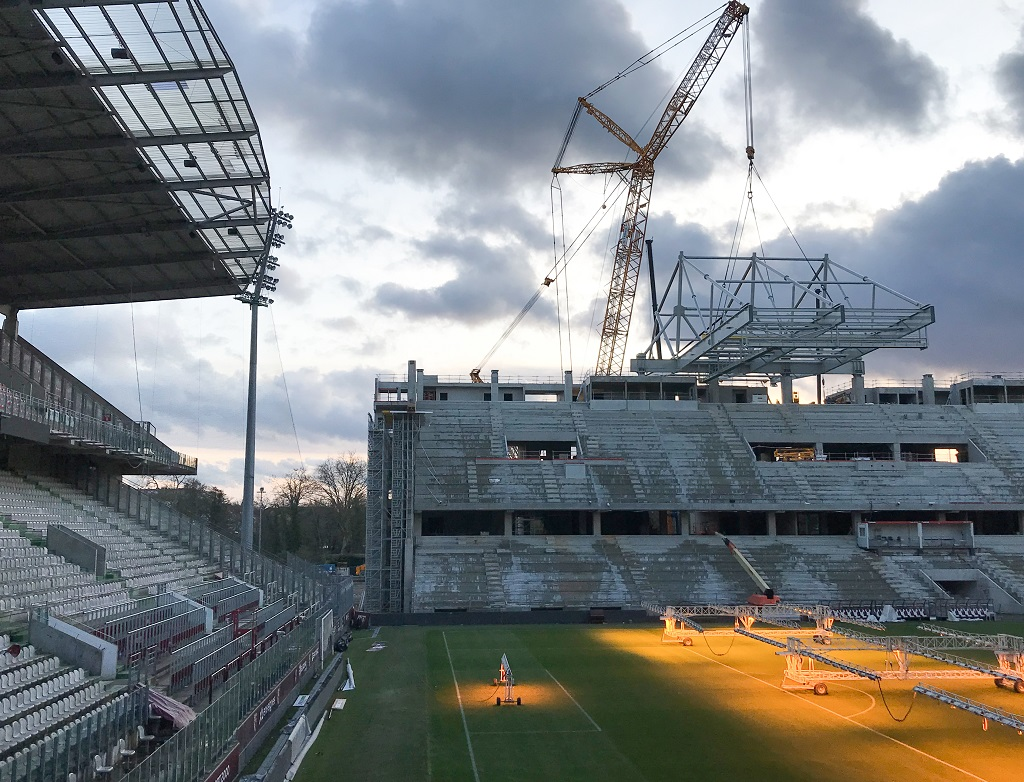 Kevin BignossiThe Demag CC 3800-1 was able to lift the four steel structures, each 147-ft. long, 82-ft. wide, 45-ft. high, and weighing up to 533,519 lbs. The crane first lifted the components to a height of 52 ft., so that it was possible to move them over a row of trees at the edge of the stadium. The crane operator then slewed the load over the trees and lifted it by another 42 ft. to 95 ft. This provided enough height to be able to slew it over the stadium’s existing stand and, with the help of signal people, lower it exactly to the place where it was "received" and anchored by the Martifer technicians.

“The lifting performed by the CC 3800-1 was an absolutely impressive spectacle for me. There has not been such a crane operation in Metz in the last 30 years," says Cavelius.