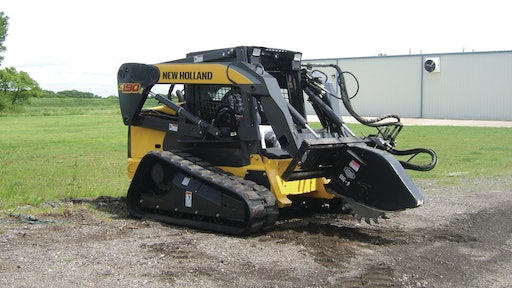 The gamut of skid steer attachments available borders on an overwhelming amount: planers, breakers, grapples, saws, etc. But just because there are so many to choose from doesn't mean you won't find the one you want. If anything, having so many options allows a contractor to do more with only one skid steer.

Not only can attachments help by allowing one machine to do multiple tasks, but they also allow workers to do smaller jobs and work in harder-to-reach places with smaller equipment instead of having to bring in a big machine, possibly risking tearing up the entire road or work area. Using a skid steer and attachment may also decrease the time it takes to complete a job, says Kelly Guthrie, marketing director for Coneqtec/Universal.

Along with the possibility of reduced job time comes the potential of a decrease in prep time because it is fairly easy to fit an attachment to a skid steer. It is common now for the front of a skid steer to be equipped with a universal attachment, or quick attach. (The mounting plate and universal mount hold the attachment on.) This allows contractors the versatility of using attachments on different skid steers no matter what company manufactured the skid steer or the attachment, Guthrie says.

"Basically, on the back of the attachments you have a mounting plate, and as long as the skid steer has a universal mount on it, then you can put just about any attachment on it," he says.

The versatility and accessibility of skid steer attachments make them a viable option for paving contractors. But with so many to choose from, how do you know what might be the most benefit to your business? The following attachments are just a few options that can be helpful to a contractor during a paving job or on pavement repair.

Planers
Odegaard says planers are a useful attachment and a popular choice for pavement maintenance contractors. Originally, small planer attachments were intended as supplementary units to use with large machines, but the role of planer attachments has increased on the jobsite.

"There are now attachments that can mill close to half a traffic lane, enabling skid-steer loaders to tackle jobs that would not have been possible in the past," Odegaard says. "The versatility of these units allows them to be used for enhanced pavement profiles and cross sections, removing bumps and ruts, curb recovery, pothole repair, manhole cover adjustments, drainage and traction control, and improved bonding, along with countless other applications."

Odegaard says Bobcat offers six planer attachments for different contractor needs. The standard-flow planer is great for minor repairs to parking lots, driveways, and roads. It is available in a 14-in. planing width and does not require the loader to have high-flow hydraulics.

A second Bobcat attachment is the high-flow planer. "The Bobcat high-flow planer provides additional versatility with more features, independent controls, and more production," Odegaard says. This attachment is available in 18-, 24-, and 40-in. models. For more specific jobs Bobcat also has a surface planer that removes roadway or parking lot stripes and leaves behind a smooth finish and a curb planer that mills slipform curbs to create a smooth transition from the road to driveway. With most Bobcat planers, multiple drums are available for each model and vary by width or number and types of teeth.

Drums of a smaller size will typically fit in planers with a wider housing; for example, a 24-in. planer can utilize drums ranging from 2 ½ in. to 24 in. wide.

Moorman says the advantage to using a cold planer is that it "completes the job more efficiently and in less time. It mills, and you won't have to redo any of the work."

"The compaction plates let paving contractors utilize their skid steers so that they can do parking lot repair, driveways, and around manholes and trenches and things like that where the big, huge, expensive machines can't go," Guthrie says. But a compaction plate attachment doesn't only help the bigger paving companies. Guthrie says that small contractors who are growing and getting bigger jobs can use this attachment as well. A paving contractor doing small jobs can use a hand-held unit, but once he starts bidding and winning larger jobs, such as parking lots or even low-volume roads that need compaction, the hand compactors aren't going to cut it. That's where the attachments come into play. Guthrie says they are the next step up before buying the big machines.

Most compaction plates have a shaker box, which is what delivers the pounding force. The Coneqtec/Universal plates also offer dual counterweights and isolation mounts. The dual counterweights ensure that the compaction force will only be applied vertically and nothing will be wasted horizontally, Guthrie says. They also help to lessen the "every action has a reaction" element by reducing the vibration back to the skid steer and its operator.

Guthrie compares the plates' isolation mounts to a car's shock absorbers. The isolation mounts absorb some of the vibration so that it isn't really hard on the skid steer. "The idea is to keep all that thumping down in the attachment and not to have that reaction come back up into the loader arms, which is just going to put wear and tear on the skid steer and the operator," he says.

In addition to the dual counterweights and isolation mounts, the three compaction plate attachments have a front lip that can be used to drag dirt before compaction and tilt to angle the plate for the slope that is being compacted.

Guthrie says paving contractors know that they have to compact before they pave. "If it's not compacted, it's not going to work," he says. Since compacting is not really an option, a compaction plate attachment can be a very valuable resource for both big- and small-time paving contractors.

Vibratory Roller
Another skid steer attachment that can be especially beneficial to a paving contractor is a vibratory roller. These attachments perform the same work as dedicated ride-on or walk-behind compactors - compact base materials and remove air pockets - but instead of requiring a separate piece of equipment dedicated only to compaction, the work can be done using a skid steer. This helps save time and money as well as transportation space, Moorman says.

If a contractor is looking to construct new pavement or make pavement repairs, this attachment is a good choice. It functions like a dedicated roller, but the vibratory roller is powered by the auxiliary hydraulics of the skid steer, Odegaard says. When the auxiliary hydraulics are activated, oil is sent through a hydraulic motor to power the shaker box and drum. With the Bobcat vibratory roller, a simple reverse of direction reverses the drum's direction as well. In order for proper compaction to occur the arms must be in the float position, he adds.

Bobcat offers two sizes of vibratory rollers, 48 in. and 72 in., and both sizes are available in either a padded or smooth drum. "Padded rollers are typically used to compact base materials that are very cohesive such as clay and heavy soils," Odegaard says. "Smooth drum rollers will compact base materials such as sand, gravel, and pea rock and also work well for asphalt patching jobs."

The Bobcat roller attachments offer free form oscillation to keep the drum in contact with the surface where the ground is uneven, rubber isolation mounts to reduce vibration transfer to the skid steer and the operator, and an offset drum design that allows the right side of the roller to extend past the skid steer to compact next to sidewalks, walls, or curb, Odegaard says.

Paladin Light Construction also offers a line of vibratory roller attachments for skid steers. The Bradco rollers come in eight models, four with smooth drums and four with padded drums. Both types of drums come in sizes of 48-, 66-, 73-, and 84-in. widths. They deliver up to 9,370 lbs. of dynamic force when operating at 20 gpm.

The hydraulic drives are isolated and protected to ensure maximum performance, and the steel drums have adjustable steel scrap blades between the frame and the drum to provide smooth and uniform compaction on the Bradco rollers.

Slot cutters
A slot cutter is an attachment for pavement repair. Slot cutters basically have two uses. First, they can be used on roadways or parking lots to cut out only a section of the asphalt or concrete that needs repair, rather than having to tear up the entire area. A slot cutter is also useful when repairing cracks. If a crack is not wide enough to accept repair material it can be widened or deepened with a slot cutter and then filled with the repair material. This way the crack repair will hold better, Guthrie says.

A slot cutter is a toothed-wheel, similar to a saw blade. Coneqtec/Universal offers slot cutters that can cut 7 in., 9 in., or 12 in. deep, each with a 3-in. cutting width.

Although Guthrie points out that slot cutters don't have much to them - basically just a hydraulic motor run by the hydraulics of the skid steer and the toothed-wheel - he does say a contractor has two options with the hydraulic motors: direct-drive motors or planetary systems. A direct-drive motor delivers the rated power directly from the motor. Planetary motor systems use a smaller motor with an extra gear box and gears to help produce the rated power. Guthrie says the Coneqtec/Universal slot cutters, as well as all of its other attachments, use a direct-drive motor system.

Drop Hammer
A drop hammer attachment is an alternative to hydraulic breakers. It allows for fast concrete or asphalt demolition, creates less stress on the skid steer and operator, and results in a cleaner surface, according to Odegaard. These attachments work well for jobs that require demolition of large, flat concrete slabs that still need to be driven over.

"Depending on the material, the surface is generally left free of sharp, broken pieces and may not even look destroyed," Odegaard says. But don't let looks deceive you. The concrete or pavement will be heavily fractured underneath the surface. An added benefit of a cleaner surface is that the smoother surface will be less damaging to tires or tracks on contractors' equipment.

A drop hammer gets attached to the skid steer and delivers a "smashing blow," according to Odegaard. The Bobcat drop hammer can break concrete up to 18 in. thick. Another added benefit to using a drop hammer is the little noise and vibration it creates, making this attachment ideal for areas where too much noise is undesirable.

How to Maintain Sweeper Attachments