With skid steers growing larger, will compact tractor-loader-backhoes still be viable on the jobsite? 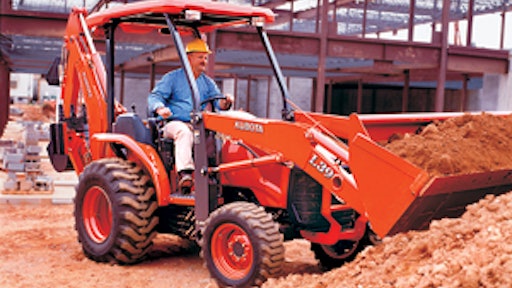 With skid steers being offered in increasingly bigger and beefier proportions, is there still room on the jobsite for the compact tractor-loader-backhoe (TLB)?

When it comes to versatility, both machines top the charts. There are numerous attachments available for each machine, and many of them can be used interchangeably on both. But despite what they have in common, compact TLBs and skid steers each command a niche on the jobsite that makes them irreplaceable.

Just what is a compact TLB?

Most sources agree that a compact tractor-loader-backhoe is one with a digging depth of 12 feet or less and a horsepower rating at or below 80. Doug Dahlgren with Allmand Bros., however, says the classification has more to do with weight, size and maneuverability.

"What makes a TLB compact isn't so much the horsepower and digging depth as it is the weight and maneuverability," he says. "Being able to easily move a machine on the jobsite or from job to job is a huge part of what makes the machine compact. It means not needing a CDL license and a big truck simply to transport the equipment. Anybody with a 3/4-ton pickup and an automotive trailer can haul a piece of compact equipment around."

Because of their small footprint, compact TLBs are uniquely suited for applications in confined spaces and wherever it's important to protect the turf from damage. These machines are ideal for fertilizer mixing/loading applications inside storage buildings with confined space. Concrete contractors use loaders inside existing structures for removing spoils with buckets and bringing in new materials with pallet forks. They are used on construction and demolition sites as well as for nursery, landscaping and golf course maintenance. They are also used by recycling and utility company repair crews and for snow removal and more.

"They are very versatile and can utilize many attachments for different tasks," says Keith Rohrbacker, construction equipment product manager at Kubota. "Larger loaders many times won't fit in areas and skid-steer loaders can damage surfaces."
Can they compete against the skid steer?

"A larger skid steer with a backhoe attachment does pose a slight threat to the compact TLB market," says Jeff Powell, marketing manager for earthmoving equipment at Ingersoll Rand. "Loading and dumping can be done with both, but when a skid steer is outfitted with a backhoe attachment, you have to take it off to go back to the loader. With a compact TLB, the downtime between loading and dumping is minimal."

Also, Powell notes that compact TLBs offer better control and improved operator comfort. The cabs are bigger and with that, cycle times are reduced because operators are more comfortable.

Faster cycle times translate into higher productivity. "When the jobsite is not very large and time is not critical, a skid steer with a backhoe attachment is okay," says Powell. "But if time is a factor, the compact TLB fits in well."

Dahlgren at Allmand says he doesn't see skid steers as a threat to TLBs because they are completely different machines. "The skid steer does a really good job at the application is was designed for: handling debris with a loader," he says. "Generally though, the backhoe attachments for skid steers are not all that effective, and I frequently hear from contractors that they're tired of taking a skid steer out on a job and having to take an excavator as well. When it can handle the application, it's probably easier to have a compact TLB on site that can handle both jobs."

TLBs have long been called the Swiss army knife of the jobsite because of their versatility. As such, sources say there's really no chance they will ever be replaced. "Whereas a mini-excavator may do a slightly better job of below-grade digging, it doesn't do as good a job of loading," says Dahlgren. "The compact TLB might only be 85 to 90 percent as effective at digging, but it is considerably more effective for backfilling or loading."

He continues, "Basically, both machines have their place. It just comes down to versatility. There is a niche for all of these machines, but it's hard to find a job that doesn't have a TLB on site. The TLB is a complete package — with the backhoe on one end and the loader on the other — which can't be said about the skid steer."

Not just a toy

Because of their size, many people have perceived compact TLBs as toys and not for serious productivity. While compact models don't have the digging depth or capacity of their larger brethren, it's not a problem since 75 to 80 percent of jobs don't call for a 12-foot digging depth. In fact, Dahlgren says, the majority of backhoe applications are well within the capacity of a compact TLB. What's more, full-size TLBs often can't fit on a jobsite, or the bucket on the backhoe might be larger than what is needed. In this case, a compact model is more appropriate.

"Most of the people renting a machine from a rental yard are going to be homeowners, hobbyists or small contractors, and the compact TLB is going to be perfect for their small-scale improvement projects," says Dahlgren. "The compact machine's steerable front axle also makes a big difference when an operator is doing work in their yard, as it makes the TLB more maneuverable and less likely to damage the turf. Most skid steers, on the other hand, are much heavier and only go front to back, which is going to generally mean more damage to the turf."

Powell notes that there is the perception among users that TLBs are easier to operate. "Some people are apprehensive to rent a skid steer, but a compact TLB has conventional controls, which makes them more comfortable," he says.

"A typical customer is not going to get on a skid steer for the first time and be as comfortable and effective as he or she would be on a compact TLB," says Dahlgren, who notes that skid steers are fairly abrupt and quick. If an operator is not used to it, movements tend to be more jerky, which creates the potential for more accidents.

"The compact TLB has more of a focus on being comfortable and precise, and this is very beneficial to the customer," Dahlgren says. "Additionally, the TLB's design makes it a very safe machine. Between the four-post structure enclosing the operator's seat and the seat belt, the machine can be operated safely whether the backhoe or loader is being used."

He continues, "A skid steer, on the other hand, has a full cab enclosure, but the operator typically has to leave it in order to operate the backhoe attachment when it is added to the skid steer. Obviously, climbing out of that seat isn't going to be as safe, and the operator doesn't have any protection if the machine were to be pulled into a hole."

Powell agrees, noting that TLBs are simply easier to get in and out of because the operator doesn't have to climb over the bucket to get to the cab. And since the cab is larger on a TLB, there is better visibility and less of the "tunnel feeling" one has inside the cab of a skid steer.

Compact TLBs offer rental businesses reliable return on investment because they command a relatively high rental rate, in relation to full-size TLBs, but don't cost nearly as much.

"I recently talked to a rental center on the East Coast and they said they get $175 per day for our Allmand TLB-425, which is a compact TLB," says Dahlgren. "They also said that a full-size machine would only go for between $220 and $230 per day, even though its initial purchase price is about twice that of the compact TLB."

Overall, the future looks bright for the compact TLB, says Powell. "I see the compact TLB market growing. In order for skid steers to offer the same dig depth, they would have to get even larger, and then they lose their uniqueness."

He concludes, "People won't replace their skid steers with compact TLBs, but when considering adding a new piece of equipment to their fleet, they'll look at a compact TLB versus the larger skid steers." 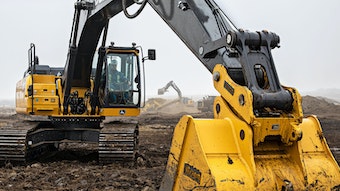 Built for safety and optimized for Deere, the dedicated pin grabber coupler delivers strong, safe coupling with your John Deere attachments.
May 1, 2021
Latest

Brad Humphrey and the team discuss all things related to the jobsite and running a successful business. Tune in for a new episode every other Wednesday.
May 11, 2021