Should You Buy a Skid-steer Loader or a Compact Track Loader? 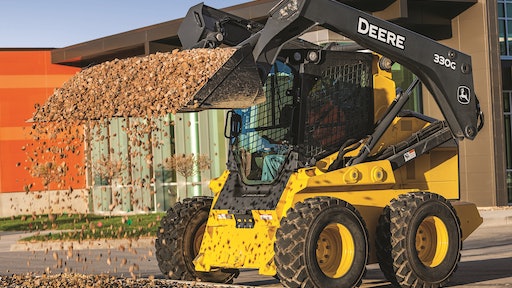 Skid steers are great on harder surfaces like concrete and asphalt, especially with hard tires.

Every contractor knows the skid-steer loader is a must-have on nearly every jobsite. It’s quick. It turns on a dime. It’s compact enough to operate in tight spaces, yet powerful and productive enough to deserve a place in every fleet, from general builders to landscape professionals, even snow removal operations.

However, the skid steer has had shortcomings. Enter the compact track loader. Essentially created as an enhanced version of a skid steer, the track loader is capable of doing the same work, with a few added advantages.

Does that mean there’s no longer a place for the skid steer? Absolutely not. And so begins the great debate: which machine is the best fit for your company, the skid steer or track loader?

To start off the great debate of the skid steer vs. track loader, one can first look to the advantages of each based on features and traits.

Skid steers are lighter than track loaders, making them easier to transport, often with less time and cost. They also have a solid reputation in the construction world, thanks to top manufacturers that have built quality machines throughout the years.

Track loaders have the edge over skid steers in terms of operator comfort. The smooth operation of track loaders is a bit more forgiving than the rougher ride of a skid steer. Tracks also cause less disruption to the ground, reducing site clean-up time compared to a skid steer.

Both machines are known for their great maneuverability. They can turn on a dime and are able to operate in tight or awkward spaces where turning radius isn’t generous.

Above all other issues, location is the main factor in deciding if a skid steer or track loader is best. Location is so important because each machine is designed to perform its best in certain conditions.

Skid steers are great on harder surfaces like concrete and asphalt, especially with hard tires. While track loaders are able to operate fine on these surfaces, the harsher ground is tougher on tracks and can cause accelerated wear.  Rocky conditions are also much tougher on track loaders, with the possibility of a track being damaged or cut by sharp objects. Skid steer operators still must take caution in this terrain to avoid punctured tires.

Conversely, track loaders can operate in places skid steers would struggle including uneven, muddy, sandy and snowy terrain. Tracks navigate well on these surfaces, and the added stability makes a track loader more productive and capable of better lifting and breakout force.

Like in any decision, dollars and cents are important, often the pivotal factor in the outcome.

Considering upfront and short-term costs, the skid steer comes out as the more economical choice. The price tag of a track loader is higher than a comparably-sized skid steer. And the biggest wear item of a track loader, the tracks, is much more expensive than skid steer tires.

Looking at long-term costs, tracks last several hundred hours longer than skid steer tires, in comparable operating situations. A mid-quality track typically lasts three to four times longer than conventional tires. With proper use and care, the track loader can be a sound financial choice in the long run.

In terms of time investment, skid steers and track loaders require virtually the same commitment to preventative maintenance. The only differentiating part is tires vs. tracks, and both of those should be checked on a regular basis — tire pressure on skid steers, track tension and adjustment on track loaders.

Another factor to consider is downtime cost. If clean ground conditions become sloppy, a skid steer may not be able to work. A track loader, however, is designed to perform in adverse ground conditions, and the day’s productivity won’t be halted due to weather or other unforeseen circumstances.

Advantages and disadvantages aside, the decision of skid steer or track loader is one that’s individualized, and boils down to each unique company, its projects and its primary focus.

As a broad example, a company with projects primarily on asphalt or concrete surfaces is going to get results with a skid steer and pay a lower initial cost. Conversely, a contractor whose tasks are typically done on uneven or sandy terrain, or those who do a good amount of work in rainy and snowy weather may find the track loader is worth the upfront cost and the investment will pay off in the long run.

Jason Riley is a Demo Specialist with RDO Equipment Co. and based in Phoenix.