KCMA releases the first two models in what promises to be a sleek, feature-rich loader lineup. 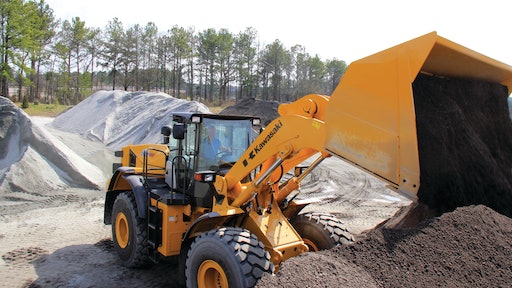 With a 33-year history in the U.S., KCMA, the North American marketer of Kawasaki wheel loaders, is preparing to release the first two models of the Kawasaki Z7 wheel loader generation. The 85Z7 and 90Z7 will begin shipments in April; four additional models are scheduled for release by the end of the year.

The new loaders represent a significant departure from Kawasaki's traditional styling. Since the 1980s, the company has based its loaders on the same structural design. The sleeker, "sexier" lines of the new models provide a more modern appearance, while improving both visibility and serviceability around the machine.

"The Z7 we have today is a dramatically different machine," says Gary Bell, vice president - general manager. "Almost everything on it is new."

Like many suppliers, Kawasaki took advantage of the Tier 4i transition to redesign a number of other machine systems. New powertrain components, hydraulic and electrical systems and structures were developed to further enhance performance and fuel efficiency. Load-sensing automatic transmissions include a mode selection function, declutch and down-shift button.

Gear pumps have been replaced by variable displacement piston pumps. "A piston pump is much more fuel efficient because it only uses energy when the hydraulics are in use," says Bell.

Closed-center hydraulics have given way to a new open-centered, excavator-style hydraulic system, developed as part of the company's joint venture with Hitachi. "Loaders have always used a closed-center system," Bell notes. "Open center allows for load feedback through the system and better, quicker response." These systems tend to be more reliable, as well, he adds.

"The big change to the Z7 is the intelligence we've added to the machines," Bell asserts. The IntelliTech Operating System uses logic and intelligence to adjust operating characteristics to the applications and conditions. The operator can set a variety of functions to allow the machine to fit  production needs. Power settings, lift arm kickout settings, declutch setting and even the way the transmission shifts can be adjusted to fit the application.

The patented "IntelliDig" system is designed to sense if the hydraulics are being overloaded during the digging process. As the machine and bucket move forward into the pile and the loader boom is raised, it could overpower the hydraulics if the force is too high, Bell comments. "If the system senses it is in that type of digging condition, it adjusts to balance the rimpull and breakout force," he explains.

With Tier 4i technology and the enhanced functionality, the overall cost of the loaders will undoubtedly be higher than their predecessors. However, the cost is quickly absorbed by the inclusion of numerous previously optional features as standard equipment.

"If you run the numbers and do an apples to apples comparison with the older models, the price increase is almost offset by the standard equipment content," Bell asserts. When added to the gains in fuel efficiency, any additional cost is rapidly recovered.