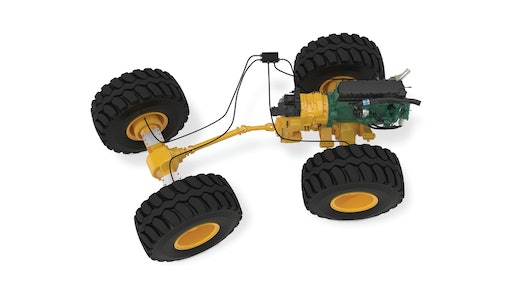 Volvo Construction Equipment’s vision of future wheel loader driveline design is closely tied to fuel efficiency, according to Gunnar Stein, global director of Driveline Systems. Volvo has an arsenal of current and future driveline technologies under development that take into account the customer’s return on investment. This is impacted by both the productivity (measured in tons per hour) and fuel efficiency (how much material is moved with a certain amount of fuel). “We need to work on both aspects at the same time to really make a difference in the pocketbook of our customers,” he states.

At a technology program held recently in Sweden, Stein presented four technical solutions that offer a progression of fuel savings up to 50% off a baseline standard four-speed powershift transmission with torque converter. It’s important to remember that each technological jump comes with increased upfront costs. The savings generated need to offset the additional costs in a timely fashion before it makes sense to make the next leap forward.

In 2009, Volvo made its first leap in technology over the current baseline powershift transmission with OptiShift. “One feature that we have in the OptiShift is the lock-up clutch in the torque converter,” says Stein. “The torque converter has a lot of losses in it. The other function is the Reverse-By-Braking function.”

With a conventional wheel loader, when you shuttle from reverse to forward, you want the machine to slow down and then accelerate in the other direction. “When you are slowing down the vehicle, the typical way is you engage the reverse gear with a clutch slowly,” says Stein. “Basically, your engine feels like it is driving forward but you are actually decelerating the machine. That is burning fuel.”

OptiShift uses electronic technology to accomplish this task in a more efficient manner. It uses the brake pedal to slow the vehicle down so the engine only has to accelerate in the opposite direction. This is seamless to the operator. “He just pushes the reverse button and the machine will slow down and accelerate again. So the operator doesn’t feel anything,” says Stein. Yet, the technology yields an average 15% savings in fuel over the baseline.

Stein believes the next step in technology could be the Continuously Variable Transmission (CVT), which offers a totally stepless function. “Four-speed powershift transmissions have four discrete speeds, [so] you are somewhat limited in how you operate the engine,” he explains.

The CVT referenced is a hydrostatic power-splitting transmission. “We have the engine that generates the power,” says Stein. “Then we split it in two.”

The mechanical part of the transmission offers the benefit of up to 96% efficiency. The hydrostatic part has the advantage of the CVT (stepless) functionality. “We combine the best of both worlds, which is technically complicated, but in essence that is all we do. The power is combined again and transferred to the wheels,” Stein explains. “We are actually able to decouple the wheel speed from the engine speed, which has major advantages in the loading cycle.”

Consider that you can produce a map of how each engine performs in any given application, with engine speed on the X axis and engine torque on the Y axis. This helps identify high fuel consumption areas. The goal is to avoid these areas, which tend to be during higher engine speeds.

Another advantage of the CVT is it doesn’t have a torque converter. “The torque converter is actually a machine element that is not very efficient,” says Stein. “We needed it in the classical technology in order to supply torque while the vehicle was at a standstill. In this situation, it doesn’t do any work; it only heats up oil. We don’t want that.”

The biggest benefit is the CVT promises to cut fuel consumption by 25% vs. the baseline. “Twenty-five percent is a lot better than we do today, but there is even more potential,” notes Stein. “Now we are looking farther into the future and more technical complexities.”

With a totally disconnected system, you can run the engine speed independent of wheel speed and hydraulics. “You can really optimize the total system so the engine is operating in those areas of lowest possible fuel consumption,” Stein explains.

There is a power spike when a wheel loader enters the pile and fills the bucket. “This is where the big fuel consumption is happening because it is taking so much power out of the engine,” says Stein. “But in the rest of the cycle, the engine is actually not used to its full power. The average power demand is only 60%. So we have to install a big engine in a wheel loader to be able to curl the bucket at the right time.

“By introducing an energy storage device, we can use the areas where the power is not fully utilized to charge the storage device and boost in the areas where demand is highest,” he continues. “Of course, that drives up technical complexity and that doesn’t come for free.” But the result is a 50% fuel savings from baseline.

“The next interesting thing, if we look even further into the future, is that we go to a totally different architecture on the driveline components,” says Stein. “You could take away the transmission and axles and replace them with something like an electric wheel motor. If you go to completely disconnected systems, you could go to an electric wheel motor. That enables a totally different machine configuration.”

So when might we see some of these innovations? “The customer will decide,” says Stein. “There are some factors that Volvo cannot change — for example, the fuel price. The whole idea of moving to these technologies is that we save total cost of ownership. The technology will come with a price tag. We need to offset that price with fuel savings.

Proterra will provide its battery technology for use in a proof-of-concept battery-electric hydraulic excavator Komatsu plans to bring to market by 2023.
Sara Jensen
January 27, 2021
Follow Us