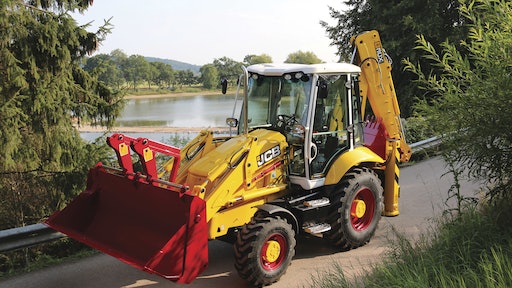 The limited-edition 3CX super backhoes - which have a top speed of 25 mph - are modeled after the 3CIII, but will be fitted with modern amenities such as 109-hp JCB EcoMAX Tier 4 Final engines and even an in-cab coffee maker.

JCB was founded on October 23, 1945, by the late Joseph Cyril Bamford in a garage in the Staffordshire market town of Uttoxeter, UK. It was the same day as his son Anthony, now Lord Bamford, was born. As Mr. Bamford remarked, “Being presented with a son tended to concentrate the mind, and when you were starting at the bottom, there was only one way to go and that was up.”

The foundation for the growth that was to follow was the manufacture of a tipping trailer made out of war-time scrap, which today stands proudly in the showroom of JCB’s World Headquarters. It was produced in Mr. Bamford's garage and sold for £45 at the town’s market. The buyer’s old cart was also taken as part of the exchange. Mr. Bamford refurbished it and sold it for another £45 – reaching the original asking price of the trailer.

However, 1953 proved to be a pivotal year for the company when Mr. Bamford invented the backhoe-loader with the launch of the JCB Mk 1. It was the first time a single machine had been produced with a hydraulic rear excavator and front-mounted shovel. Since then, JCB has produced more than 600,000 backhoes and they are now manufactured on three continents.

Today, JCB has 22 factories - 11 in the UK with others in India, the US, Brazil and China - employing more than 12,000 people. The backhoe-loader represents just one of 300 products the company produces and sells globally.

Focus on the Future

With 70 years of history and growth behind the company, JCB continues to focus on innovation and the delivery of new products to the marketplace.

“Sevent years is a long time, but the past is the past and while we are proud of it, our engineers are really only interested in the future and the products of tomorrow," said Lord Bamford, JCB chairman. "You cannot rest on your laurels in business; you have to be thinking of tomorrow, the changing world markets and the products our customers need"

The company plans to celebrate its 70th anniversary today by giving employees around the world the day off. The day will also be marked by the introduction of a JCB limited-edition backhoe-loader, based on the current 3CX super backhoe model and serving as a tribute to the product line that fueled JCB’s growth. A total of 70 of the special machines will be made.

“The backhoe loader was the building block for the success of JCB and while we now produce many other types of machines for construction, agricultural and industrial applications, it remains one of our most important products," said Lord Famford. "The JCB backhoe has not only helped put JCB on the map, but also Staffordshire and Britain. I’m delighted that we are producing these limited-edition models to mark the company’s anniversary.”

The first of the limited "platinum" edition backhoes will go into production at JCB’s World Headquarters in Rocester next month. They will come with red buckets, a full white cab and red wheels instead of the customary black and yellow finish – a look last seen on the 3CIII model in 1979. And in a nod to the demands of the modern operator, the colorful machine will also be equipped with an in-cab coffee maker. The limited-edition 3CX super backhoes - which have a top speed of 25 mph - will be fitted with 109-hp JCB Tier 4 Final EcoMAX engines manufactured at the company’s plant in Derbyshire in the UK.

Emissions regulations and shrinking jobsites should be taken into consideration when selecting a backhoe loader.
Curt Bennink
April 5, 2019
Follow Us