Launched in 1977, the Loadall range now incorporates models with working heights up to 65.6 ft. and maximum lift capacities exceeding 6.61 tons 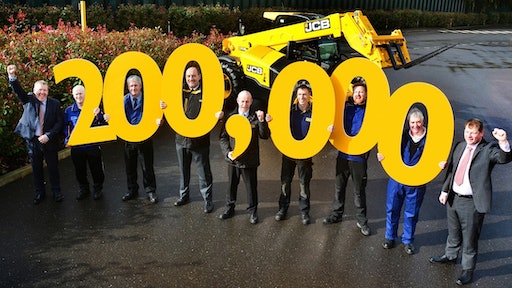 JCB’s Loadall has provided material-handling and lifting solutions for construction, agricultural and industrial markets for almost four decades. Today, JCB celebrates the production of its 200,000th Loadall telehandler, a milestone in the material-handling history.

Launched in 1977 as the JCB 520, the first Loadall was a two-wheel-drive machine with a 21-ft. lift height and a maximum lift capacity of 2.48 tons. Previously, contractors had lifted materials with rough-terrain forklifts, backhoe-loaders and wheel loaders. Over the past 40 years, the Loadall range has expanded to incorporate machines with working heights of up to 65.6 ft. and maximum lift capacities exceeding 6.61 tons.

With every update, JCB has moved the telescopic handler market forward, introducing four-wheel drive, placing the engine to the side of the chassis to allow a lower boom mounting position and offering multi-mode steering with equal-sized wheels to improve maneuverability.

“From very small beginnings, the JCB Loadall has become a very important machine for JCB and for the construction and agricultural industries,” said Lord Anthony Bamford, JCB Chairman. “The way loads are handled on building sites and farms has never been the same since we introduced the Loadall in 1977.”

1981 The lighter second-generation 520-2 and 520-4 is launched, introducing four-wheel drive, the Q-fit implement carriage and larger rear wheels for improved traction and flotation.

1982 JCB adopts the “Loadall” name for its telescopic handler range.

2009 The company launches the the Loadall 527-58, the first compact hydrostatic drive side engine model, with a 2.98-ton lift capacity and nearly 19.69-ft. lift height in a compact and highly maneuverable package.

2014 Smart Technology package on Wastemaster machines includes regenerative lift cylinder hydraulics speeding up loading cycles by up to 20% or cutting fuel consumption by 15%.

*Models not available in North America

Compared to a skid steer, JLG's SkyTrak 3013 can offer better reach into truck beds and trailers and over obstacles, in addition to better lift height for single story houses and dump trucks.
JLG Industries Inc.
February 12, 2020
Follow Us