Cat Pits “The Mountain” vs. the Machine in its Latest Built For It Trial

Construction giant enlists Game of Thrones strongman for the latest in its video series. 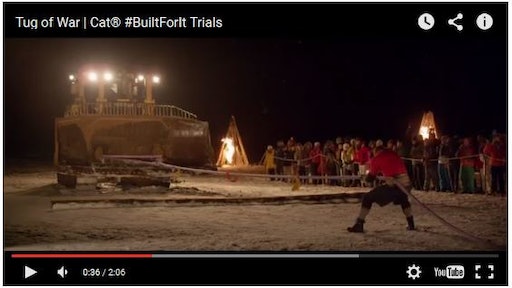 Caterpillar has proven its marketing prowess with its ingenious Built For It video series, which sets out to prove the tenacity of its equipment while operating in what may best be described as out of the ordinary circumstances. Its first video, “Stack” (featuring Cat equipment playing a giant game of Jenga), went viral overnight, proving the company knows how to capitalize on the digital world when it comes to promoting its full line of construction and mining equipment.

Caterpillar Videos Aim to Lighten Up a Heavy-Metal Image

Now the global construction equipment behemoth has enlisted a giant of a man to star in its latest video, “Tug of War”. Iceland native Hafhor “Thor” Bjornsson is 6 ft. 9 in. tall, weighs nearly 400 lbs. and holds several Guinness World Records for strength. He is a four-time winner of Iceland’s Strongest Man competition, was Europe’s strongest man last year and took home second place in the 2014 World’s Strongest Man competition. Yet, he is perhaps best known for his portrayal of Gregor “The Mountain” Clegane on HBO’s Emmy-winning TV series “Game of Thrones”.

In “Tug of War”, Bjornsson takes on his biggest challenge yet when he goes up against the Cat D10T crawler tractor, a 600-hp, 77-ton monster of a machine. “We’re pitting a tractor that typically moves mountains against a mountain of a man,” comments Archie Lyons, creative director for global brand marketing, Caterpillar Inc.

Of course, the odds are stacked against the man – that is, until he gets some help from his countrymen who came out to watch the epic match. Battling not only the D10T but temperatures of -22° F (-30° C) and winds reaching 65 mph (105 kph), Bjornsson and the 250+ Icelanders struggle to hold off the massive machine. It looks grim until…

I won’t spoil the ending, but it does beg the question: Is Caterpillar attempting to portray itself as the giant corporation with a heart? And if so, is it a success?

I guess you’ll have to watch the video and decide that one for yourself. Oh, and don't forget to enter the competition to win Cat gear - the company will be giving away 20 pairs of Cat gloves or the grand prize of a pair of Cat boots. Visit http://tugofwar.forconstructionpros.com/ to enter.

[VIDEO]Why Caterpillar Shot the Built For It Trials, And How it Worked

If you happened to missed any of the videos in the Built For It series, simply click on the appropriate link below:

[VIDEO]Why Caterpillar Shot the Built For It Trials, And How it Worked