Volvo wheel loaders and excavators, strengthened for tunnel conditions, are key pieces of equipment during the blasting and excavating of an 8-mile undersea tunnel in Norway 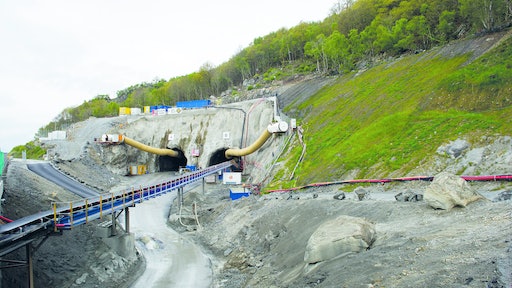 Burrowing underground for more than 8 miles and incorporating a pair of parallel tunnels, each with two lanes running in opposite directions, it will be nearly 984 feet below sea level at it lowest point.

Content first published in Volvo's Spirit magazine in the fall of 2014.

The Norwegian Road Administration commissioned the construction of the Solbakk (Ryfast) undersea tunnel from Stavanger on the south-west coast to Solbakk on the south coast of Rogaland to deal with the expensive and time-consuming ferry services residents of the 50,000 remote islands bordering Norway's coastline have had to deal with as they shuttle from one island to another.

Burrowing underground for more than 8 miles and incorporating a pair of parallel tunnels, each with two lanes running in opposite directions, it will be nearly 984 feet below sea level at it lowest point. Estimated at a cost of more than €610 million (more than $673 million), the project will be funded by toll charges and the local government. When it opens in 2019, 4,000 vehicles a day are expected to use the tunnel, increasing to 8,000 by 2035.

The first and longest phase of the project has been contracted to Marti IAV Solbakk DA, part of the Marti Group, a privately owned family business established in 1922. The company is responsible for the nearly 5-mile stretch of tunnels starting from Solbakk, with 3,937 feet already drilled and blasted in each tunnel during Phase 1 of the project. During the tunnel building’s busiest phase around 200 of its staff will be onsite.

Marti schedules its drill-and-blast operations six days a week, 10 hours a day, using a traditional mix of explosives. The blasted rock is then transported a maximum 1,640 feet from the tunnel face to the crusher. Excavation of the blasted rock runs 24 hours a day, and 1.3 billion tonnes of rock will eventually be removed to create the tunnels.

Among 20 or so major pieces of equipment at the site are five Volvo L250G wheel loaders, two ECR235DL and ECR88 short swing excavators, and one EW180D wheeled excavator. A Marti conveyor belt connected to the crusher transports blasted rock from the tunnels to the nearby coast to be used as in-fill materials.

“The rock we are drilling and blasting is extremely hard, but this is normal in Norway,” says André Pas, project manager at Marti. “The Volvo machines are made to handle tough conditions, and we have had no problems even though we use them nearly every day for long shifts. Life in the tunnels is hard for any equipment, but Volvo is a premium brand and we conduct regular maintenance and service work, helping to ensure the machines keep running at their best as they are essential to our operations.”

“We are dependent on the Volvo wheel loaders,” says Ulrik Benthin, workshop leader. “Our L250G wheel loaders have been modified for tunnel conditions and include more safety features such as stronger windows and additional lights. Even though the terrain is particularly hard here you can barely feel the rock and rubble underneath when you drive the wheel loader. It’s a smooth ride and comfortable for the operators who are in the machines a long time every day.” One of the wheel loaders has clocked up more than 2,000 hours since September 2013. The excavators are also modified for additional safety, including extra lights and protection for windows and cylinders.

“The Volvo machines are running well, and the good thing about Volvo is there isn’t a long wait for any machine parts,” says Andreas Jakobitsch, workshop manager. “It is important that the machines don’t have any downtime because we need seamless and continuous operation to keep on schedule. We have a mechanical workshop onsite for any work needed.”

With such an ambitious and difficult project, safety is of the upmost importance, in evidence throughout the entire construction area. For example, employees can shut themselves into a fireproof oxygenated chamber in case of fire or rockfall.

“Marti ordered the machines from the Norwegian Volvo dealer, Volvo Maskin AS, and the company uses Volvo equipment in many of its other projects around the world,” explains Ove Folkvord, Volvo CE area manager in Rogaland. “Safety is very important to the company, which is why some of the machines have been modified and strengthened for tunnel conditions. We visit the site regularly to make sure their machines are in full working order and carrying out their duties with maximum efficiency.”

Phase 2 of the project — the Hundvåg tunnel — extends 3.4 miles at 312 feet below sea level. Once opened, this part of the tunnel will see 10,000 vehicles passing through each day, rising to 25,000 by 2035. But the last part of the project, Phase 6, will involve building roads for better access to the tunnels and using the blasted rock to reclaim land from the sea for a new car park and bus terminal on the coast. The company even has a boat, the MS Marti, to carry out offshore work inspections. con

As gigantic a project as it is, the Ryfast tunnel is just one part of a major reorganization of Norway’s road network. The country’s Public Roads Administration plans to build another undersea tunnel from Tungeneset to Arsvågen, starting in 2015 and scheduled for completion in 2022.