Get the most from your diesel

Maintenance is the key to engine longevity and efficiency. 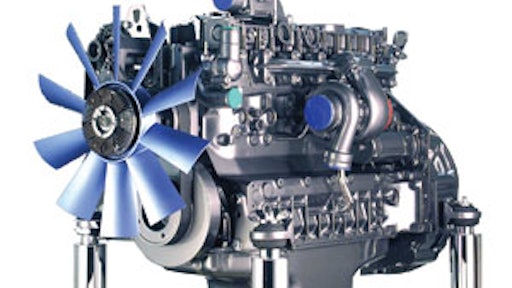 You probably have at least a dozen engines that you use for your business throughout the course of a week. Keeping them in top working condition is key to maintaining a profitable and reliable business. The following tips, used in conjunction with your engine manufacturer's recommendations, will help your diesel engine run long and efficiently.

Intake System. "Outside contamination through the air induction system on the air intake is probably the most common failure that we see," says David Couick, Engine Power Source, a major engine rebuilder and distributor.

"Believe it or not, we do see a fair number of engines that are operated with either the wrong air filter element installed or in some cases operated with no element, causing unfiltered air — dirt — to enter the combustion system. This leads to premature and very rapid wear to the piston rings, cylinders, and intake valves," Marv Spurlin, national service manager, Deutz Corporation, explains.

As Steve Dunning, service engineer at Kubota Engine America, notes, over-servicing an air filter can be bad, too.

"Air filter over-maintenance is really bad," he says. "Never remove an air filter unless you're supposed to. Every time you pull an air filter out of the housing you take the risk of dropping some dirt into the air intake."

"Don't check coolant hot," Dunning says. "And just checking the coolant level in the bottle is not good enough. You should also check it in the radiator from time to time, because if there's a leak between the radiator and the bottle, the bottle may stay full even if the radiator is getting low."

Fuel System. Make sure only diesel fuel is used in a diesel engine. It's not uncommon for someone unfamiliar with a piece of equipment to fill a diesel engine with gasoline.

Unlike unleaded gasoline, different diesel grades are not readily available. Number one diesel, formulated for colder climates, isn't very common anymore in the United States. Mostly you will find only number two diesel, even in winter.

"Generally, a fuel conditioner for winter use or winter-grade number two diesel is going to be sufficient," Dunning explains. He notes that different manufacturers will have different opinions on fuel conditioners, but in general they are a good thing.

"That doesn't mean you want to put fuel conditioner in every time you buy fuel — there are reasons for it such as cleaning injectors or winter environments," Dunning says.

Lubrication System. Oil contamination is one of the leading causes of engine failure. Dirt can enter the engine through a compromised filter or a dirty funnel used to add oil. Fuel and anti-freeze can also contaminate lube oil through a number of points on a malfunctioning engine. These contaminants remain in the oil until you change it, so change your oil as recommended by your engine manufacturer. More frequent oil changes may be required if your engine is working in a dusty or other unfavorable environment.

"The demands placed on diesel engine lubricating oil are more severe than that of gasoline engines," Spurlin says. He suggests you check your lube oil level every day, especially on smaller diesel engines that have small lube oil capacities. He also emphasizes the importance of choosing the right materials when changing oil, including using oils that meet the engine manufactures specifications for API grade (American Petroleum Institute) and the correct viscosity.

"Where oil analysis can be a real benefit is if you establish a benchmark," Couick says. "The tests don't cost very much, and if someone samples a piece of equipment once, twice a year, or even every other oil change, he's got a set of data. If he's been tracking this, and all of sudden he gets some values that are really elevated, he knows that one of his operators have either left an air filter out or someone hasn't done something properly."