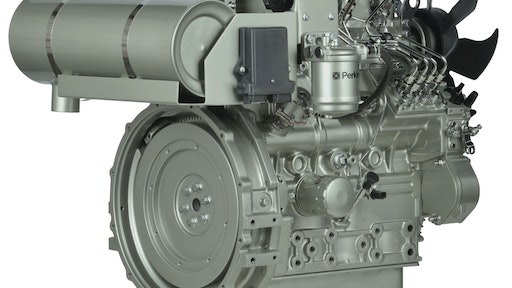 The new 400F, the latest addition to the 400 Series range, meets Tier 4 Final, and Europe's Stage IIIB regulations. The regulations come into force January 2013 for engines above 25 hp in the U.S. and above 49.5 hp in the EU.

Perkis has sold more than a million 400 Series engines and claims the line has two billion "first life" hours under its belt. Ratings for the three- and four-cylinder line run up to 61 hp. Ninety-seven percent of components from the previous Tier engine carry over to the Tier 4 Final versions.

Aftertreatment is the only addition, and has been designed to be as compact as possible, with flexible mounting arrangements to ease installation. The device uses passive regeneration, with systems in place to provide active regeneration capability, effectively burning the soot in the diesel particulate filter to maintain optimum performance. There is no impact on the duty cycle, so machine operation will not be compromised.

Ash-removal service will be required at a minimum of 3,000 hours.

The 400F will be manufactured alongside the 400D specification engines in Perkins’ 400 Series plants around the world. Facilities in the UK, the USA, and China provide product availability for customers in all regions of the world.