Tier 4 Engines Get It Done Without DPFs 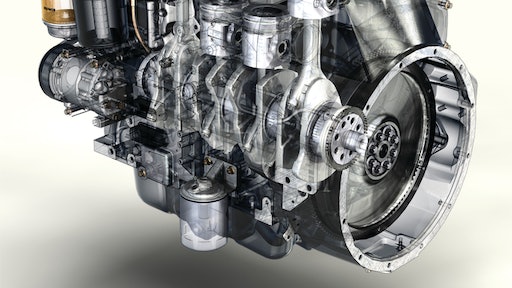 On display will be the JCB Ecomax engine, which meets Stage IIB/Tier 4 Interim without the need for diesel particle filters or emissions aftertreatment.

In October, Bobcat became the latest manufacturer to announce a Tier 4 solution that eliminates the need for a diesel particulate filter (DPF). As part of its strategy, Bobcat will move away from its current engine supplier and instead utilize engines built by parent company Doosan in some of its equipment for 2014.

Development of the new Tier 4-compliant engine is a collaboration between Bobcat, Doosan and such top engineering consultants and engine design firms as Ricardo and FEV among others. The Doosan-built engine will include three models with 1.8L to 3.4L displacements and 33 to 99 hp. The engines will not require a diesel particulate filter to achieve Tier 4 compliance. They will be available in select Bobcat machines meeting Tier 4 horsepower requirement ranges sometime in early 2014.

While Bobcat and Doosan are not yet prepared to release details of the technology behind the engine, several other engine suppliers have already made their solutions public. Following is a synopsis of their designs for 2014 and beyond.

In fall of 2011, Kohler Engines and Lombardini came together to unveil the Kohler KDI1903TCR and KDI2504TCR heavy-duty diesel engines, which achieve Tier 4 Final emissions compliance minus the DPF. This was made possible by combining such components as Kohler’s direct injection system, cooled exhaust gas recirculation (EGR) and a diesel oxygenated catalyst (DOC).

High-pressure common rail fuel injection was a big contributor to the new engine design. Kohler centrally located the fuel injector within a four-valve head and optimized the injector nozzles and spray pattern. The result is a high-pressure system that utilizes pressures at 29,000 psi, resulting in better atomization of the fuel, improved fuel consumption and a reduction in emission particulates.

An electronic control unit (ECU) drives the fuel injection system. The mapping program within the ECU monitors and manages power output in varying conditions by injecting fuel multiple times into the combustion cycle to maximize torque and power when needed most.

According to Kohler, the direct injection system provides the ability to save up to $1,400 on fuel and $116 on oil per year compared to indirect injection diesel engines with diesel particulate filters. This is based on 1,000 hours of annual operation at $3.75 per gallon of diesel fuel and $4.10 per quart of oil.

No DPF for Under 750-hp Engines

The Series 1000, 1100, 1300 and 1500 engines will use selective catalytic reduction (SCR) exhaust aftertreatment technology to achieve compliance with limits set for nitrogen oxides (NOx) and particulate emissions. No DPF is required to achieve further particulate reduction.

The new engines will cover the 750-hp and below power range, offering outputs ranging from 134 to 617 hp. According to Tognum, they will provide up to 5% reductions in fuel consumption, up to a 20% increase in service life, higher torque at low engine speeds, greater engine brake power and fast, straightforward maintenance.

Series 1600 C&I engines — which meet Tier 4 Final regulations without either SCR systems or DPFs — will be introduced to extend the range to 980 hp. The engines will incorporate in-engine EGR technology, along with high-pressure common rail injection, two-stage turbocharging and cooled EGR. Particular emphasis has been placed on optimizing the combustion process in order to minimize fuel consumption.

Series 2000 and Series 4000 engines above 750 bhp will meet Tier 4 Final standards with no aftertreatment or DPF required at any bhp. This will be achieved through a combination of two-stage turbocharging, EGR cooling, a new combustion system design and high-pressure common rail injection. Both series are based on proven MTU engine technology, and are designed to provide optimal transient behavior with rapid response to changes in engine load.

In mid-2012, JCB formally launched its technology solution to meet Tier 4 Interim/Stage IIIB requirements in mid-2012. The JCB Ecomax engine achieves emissions levels through the use of its patented in-cylinder technologies, without the need for external exhaust aftertreatment or a DPF.

Using a patent-pending combustion process design, the company combines injection pressures of 29,000 psi in the common rail system with variable geometry turbocharger for rapid response at low rpm to create a cleaner, more efficient burn. Cooled EGR is used to further reduce emissions, passing a small amount of the exhaust gas back through the engine to cool the combustion process and reduce NOx within the cylinder.

Upgraded fuel and air filters will ensure cleanliness of the fuel going into the engines, plus a 5-micron water separator and fuel filter for the fuel supply line will supplement the 2-micron engine filter. A crankcase ventilation filter is also required. However, the engines will be able to run on standard engine oils., helping to reduce owning and operating cost.

The Tier 4 Interim engines will have the same 500-hour service intervals as the previous models. It’s estimated that there will be an increase of $.05/hour over a typical 6,000-hour ownership period for a backhoe-loader, an amount that should beis offset by fuel economy and productivity benefits.

According to JCB, its Tier 4 Interim technology also allows the company or its dealers to sell a low-cost kit to recalibrate the electronic control unit so the engine machine can be resold and operated in countries where poor quality (higher sulfur) fuels are used. The kit keeps the EGR valve closed (reducing potential sulphur damage), reduces fuel injection pressures and reduces the variable geometry turbocharger range.

“By recalibrating the JCB Ecomax engine, turning off the EGR and reducing fuel injection pressures, it is possible for the engine to be run on higher sulphur content fuels,” says Alan Tolley, director of engine programs.

Scania’s range of 9-, 13- and 16-liter industrial engines — covering outputs from 271 to 691 hp — will be fitted with nearly the same unique SCR system as its Euro 6 engines for trucks. Using the XPI (extra high-pressure injection) common-rail fuel injection system, an in-house technology, the required levels of NOx and particulates will be achieved without the need for any kind of particulate filter. XPI offers up to 34,800-psi injection pressure and allows freedom of injection timing and pressure.

The new engine platform for 5-, 6- and 8-cylinder configurations will also combine the XPI system and SCR. XPI fuel injection, engine management, EGR and SCR systems will be used in different combinations for different applications. The engine management system controls fuel injection, exhaust aftertreatment, charge-air and engine operating temperature. To improve the efficiency in the SCR catalyst, Scania will include a DOC.

Differences in fuel consumption will be lower in some cases or only slightly higher in others, depending on how the EGR is used in combination with the variable vane geometry turbocharger and SCR system.

Both 1204F models use aftertreatment comprising DOC/SCR modules. This compact solution not only achieves the significant reduction of NOx required, it also removes the need for any regeneration strategy for soot, since the formulation of particulate emissions is prevented in the combustion process. The small size of the DOC/SCR module means it can be mounted in a variety of remote locations, freeing up valuable space in the engine bay.

“We have used the arrival of SCR technology to our customers’ advantage,” states Daniel Clayton, Perkins Tier 4 product marketing manager. “By offering a no-DPF option, we have given them unrivalled flexibility as to how they wish to configure their machines. What is certain is that machine performance will in no way be compromised.”

Perkins does offer the option of a service-free DPF aftertreatment unit to meet specific OEM requirements.

Many of the improvements made for Tier 4 Interim have been carried over into the new engine range, such as improved power density, improved transient response and competitive fluid consumption. For engines from 3.4 to 7.1 liters, Perkins has tailored SRC systems that maximize customer benefits.