From Pneumatic to Solid and in Between

You now have even more tire options for your skid steers. 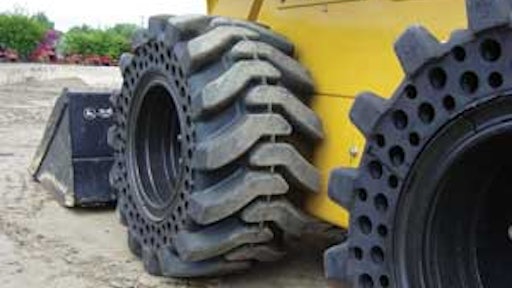 Like the skid-steer loader market itself, the tires used on these machines are more diverse than ever. Today, you have a choice between pneumatic bias and radial tires, polyurethane ("foam") filled tires, solid tires and "aperture" tires.

"The skid-steer market has exploded in the last several years with the number of attachments that have become available," says Mike Tolman, Michelin earthmover segment manager for ports and terminals. "These machines were primarily used in construction, but now they're being used anywhere a small, versatile machine is needed."

That demand has in part led to new tire offerings. Determining which of these tires is right for your skid steer is based on where and how you use your machine. "There is a time and place for each type of tire," says Neil Ganz, executive vice president of GPX International Tire Corp., which markets Galaxy and MITL tires.

"If you are a contractor doing landscaping on an established lawn, you'll want a different tire than a contractor who is using a skid steer on a new jobsite or one who is working in demolition," says Tolman. "Sometimes there are trade-offs. For some contractors, they may need exceptionally good traction. For others, absolute puncture resistance may be more important."

When shopping for pneumatic tires, you have a choice between bias and radial construction. Bias remains the overwhelming market leader. Not only is it less expensive, it has a strong, stiff sidewall to protect against construction debris, as well as the skidding action placed on the tire each time the machine turns, says Ganz.

But radials have become more popular since their introduction to the market about five years ago. To protect their characteristic sidewall "bulge", some radials are constructed with multiple layers of steel belts in the tread and sidewall to repel nails, staples, etc., Tolman explains. "With the steel belts, we can maintain puncture resistance without sacrificing suspension," he states. "And radials have a long life because with the suspension they provide, it's no longer a case of the ground gives or the tire gives. The radial is able to flex to the surface it's on. It conforms and gives less resistance to objects to decrease the wear of the tire."

Both radial and bias provide better traction and a softer ride compared to filled and solid tires. "As soon as you fill a tire, you basically turn it into a solid," says Ganz. "Unless you have fill that acts as air, the tire doesn't flex. A tire gives its best traction when it flexes so it can clear the mud from the tread."

As for ride quality, the only suspension on a skid steer comes from the tire itself. "Without any air, you'll feel every bounce and bump and every rock you roll over," says Tolman. "Your load can also be affected. If you hit a rock, it can shift and you risk dropping it."

"When you have a concrete-hitting-concrete approach, you can increase the maintenance of the machine," adds Ganz. "There is no give, and all the bolts work a little harder."

But the "softness" of a pneumatic tire comes at a price: greater susceptibility to flats.

Filling provides a radial or bias tire with increased puncture resistance. Fill, such as that provided by Arnco, is actually a solid polyurethane core rather than "foam," explains Bob Giasson, director of marketing and OEM sales at Arnco.

"It's a solid urethane elastomer that acts as a flat-proofing agent," he says.

"Our SuperFlex 8 Shore A is a ‘soft' material that acts as a dampening device for vibrations, while giving a ride similar to an air product," says Giasson. "It dampens vibrations and shocks that are normally transferred to the vehicle and operator to give overall better performance for braking and handling compared to a harder product. The unique physical properties of SuperFlex dampen more shock than even an air-filled tire."

The biggest trade-off for polyurethane fill is weight. Generally, it tips the scales at about the same weight as water, about 8.33 lbs. per gallon. A typical 10-16.5 tire will take about 135 lbs. of fill. "If you're in very soft or muddy conditions, that extra weight could possibly bog down the machine," Giasson says.

That's where purchasing a premium tire can be of benefit. "The perception is to buy the least expensive tire and fill it," Ganz says, noting that a typical 12-16.5 tire takes almost 200 lbs. of fill. "But if the tire doesn't have the casing strength to protect it, you can ultimately damage the tire when you fill it. And since a premium tire has a smaller cavity due to the extra rubber, plies, etc., you'll pay less to fill it because you pay for fill by the pound."

Solid rubber tires provide the ultimate in puncture resistance. They're perfect for extreme applications such as demolition, recycling and quarries, where rebar, sharp rocks and debris can easily take a pneumatic or filled tire out of commission.

However, like most options, they have their drawbacks. Due to their stiffness and lack of flexibility, they can more readily tear up soil and lose traction in muddy conditions. The thick rubber, while impenetrable, also provides the least comfortable ride and adds a considerable amount of weight.

A relatively recent introduction is aperture tires, or "semi-pneumatics" as coined by McLaren Rubber Industries. These tires strike a balance between comfort and penetration resistance, and they can be used with over-the-tire track systems.

The apertures, or holes, molded into the sidewall of the tire provide cushioning. "Our Nu-Air semi-pneumatic tire is a solid tire that has air inside, but the air isn't confined," says George Zafirov at McLaren. "The holes give cushion for the operator and the machine. A very stiff solid tire conducts the vibration from the rough terrain to the axle, which can damage the machine. And for the operator, don't underestimate comfort. It can really be an issue with solid rubber tires."

The thick tread face provides durability and protects the tire from damage in severe cutting conditions. "It's important to be aware of the actual cost of flat tires," says Zafirov. "Calculate the downtime associated with flats. The tire with the lowest initial cost may not be the least expensive option in the end.

He adds, "Consider the cost of paying someone to fix the tire, plus the work that isn't getting done. In the end, when you draw the bottom line, you may actually make more money with a more expensive tire."

Is Retreading Right for You?

Recently, the concept of retreading skid-steer tires has garnered more attention. A mainstay in commercial over-the-road tires, retreading can be a way to reduce overall tire expenses.

Virtually any skid-steer tire can be retreaded, whether it's pneumatic, filled or solid. Yet, some are more readily retreaded and more cost-effective than others.

"It really depends on the application needs of the customer," says Jerry Von Gruenigen, industrial sales manager, Cross Dillon Tire, Des Moines, IA. "Someone who buys a standard bias skid-steer tire isn't a good candidate because the cost effectiveness of the program does not work for them."

Von Gruenigen identifies filled premium bias and radial tires or solid tires as a better candidate for retreading. "It's a lot more expensive to replace these tires," he says, "especially an L-5 tire that's used in demolition and recycling applications or in landfills."

He cites the following as an example. A premium bias-ply 12-16.5 size tire costs on average $250; a radial will run upwards of $350. The cost to fill the tires would add another $250. Additional costs incurred would be about $65 to cut the old tire off, and another $8 to scrap it. All totaled, one wheel assembly costs about $600. The cost to retread a tire is about $200. Savings on retreading adds up to about $400 per wheel position or about $1,600 per machine.

"That's where the cost-effectiveness really comes to light," Von Gruenigen relates. "With retreading of filled tires, you can take the whole assembly, leave it mounted on the wheel and retread it with the fill still in it."

Von Gruenigen identifies a few key points of a successful retreading program: start with quality tires, monitor them for even wear and work with a dealer who understands the characteristics of tires. "With the right quality tires that are monitored closely and rotated to protect the casing, many times you can get up to three retreads per tire," he says. "That can be an exceptional savings when considering the cost of filled or solid tires.

"With the increased costs in rubber, steel and transportation that goes into getting the tire to the end user, I foresee the retreading market really growing over the next 10 years," he continues. "I think people will start to look at the overall cost of putting four tires on a machine vs. reconditioning them, especially in a filled or solid application. It can make a lot of economical sense. I think industrial retreading will continue to grow."

From sidewall construction to the complex world of compounds, you’ll get an inside look at how tires give telehandlers and MEWPs a boost.
Alliance Tire Group
June 22, 2020

Specifically for 3/4- and 1-ton pickup trucks and vans used in commercial applications, as well as for European van platforms
Michelin North America
May 23, 2019

This line of earthmover (EM) diagonal tires is designed for a wide range of construction machinery and available in 28 versions
Mitas Tires
May 22, 2019