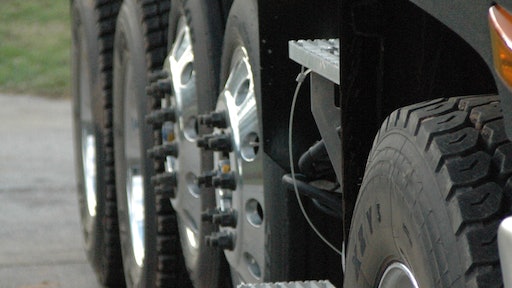 The deeper the tread blocks, the better the grip but the worse the fuel economy. Cut and chip resistance are also challenges in the design of low rolling resistance tires.

The intent of the regulations is to reduce greenhouse gas (GHG) emissions by reducing fuel consumption. Phase 1 of the standards is currently being implemented. “The National Highway Traffic Safety Administration and U.S. Environmental Protection Agency (EPA) recently issued proposed Phase II rules for the Greenhouse Gas Emissions and Fuel Efficiency Standards for medium- and heavy-duty engines and vehicles,” says Gary Schroeder, director of commercial vehicle and global OEM sales for Cooper Tire and Rubber Co., assigned to the Roadmaster brand. “These rules impact vehicles in model years 2018 to 2027.

First, we need to understand rolling resistance. “It is the energy a tire consumes while rolling under load,” says Sharon Cowart, director of product marketing, Michelin Truck Tires. “Heat is generated by the tire’s sidewalls and tread as the tire flexes when rolling. It is estimated that a third of heavy-duty truck fuel consumption is used to overcome rolling resistance.”

Not all tires are created equal. “The rolling resistance of a truck tire depends on its construction and the compounds being used,” says Cowart. “Michelin’s Dual Energy Compound tread delivers a fuel-efficient top tread layer that comes in contact with the road and optimizes wear resistance and traction, alongside a cool running tread rubber bottom layer that increases casing temperature for low rolling resistance. This inside layer never touches the pavement.”

But there are trade-offs. “When a tire design achieves lower rolling resistance, it can result in undesirable side effects if the tires are not carefully engineered,” says Schroeder. “For example, when some tire makers formulate tread compounds to achieve lower rolling resistance performance, the tires may wear faster or become more susceptible to cutting and tearing.”

Two of the most common ways to achieve low rolling resistance are:

Tread depth is one of the most critical factors. “In most cases, the depth of a tire’s tread blocks is inverse to rolling resistance,” says Cowart. “The deeper the tread blocks, the better the grip but the worse for fuel economy. Stiffer sidewalls can also reduce rolling resistance. However, there are some design options available that can lower the rolling resistance in areas not related to on/off road use (internal components, for example).”

But even in fuel-sensitive long-haul operations, there are trade-offs that need careful consideration to obtain the lowest total cost of ownership. “Rolling resistance improvements usually come at the cost of mileage and durability,” says Prosser Carnegie, NAFTA product development manager, Continental Tire. That being said, technological advances have helped to reduce the trade-offs associated with low rolling resistance tires using means other than tread cap compound.

“For example, when some tire makers formulate tread compounds to achieve the lower rolling resistance performance required by SmartWay, the tires may wear faster or be more susceptible to cutting and tearing than tires designed with more traditional tread compounds to maximize wear performance,” Schroeder states. Another difference is the tires may have shallower tread depths. “Our Smartway-verified Roadmaster RM851(EM) and RM256 drive tires, however, are designed with tread depths and compounds that offer comparable or even better performance than that of their non-SmartWay-verified counterparts.”

Owners must weigh factors such as expected life and fuel savings. “That is the reason we use an LODC calculation to compare fuel-efficient and standard use tires,” says Carnegie. “LODC stands for ‘Lowest Overall Driving Cost’. This tool examines the total cost of tire ownership and helps to visualize the point at which fuel efficiency can return more investment compared to other more easily seen performances such as removal mileage.”

Vocational tires are under development to meet the upcoming GHG regulations. “The concern is that most current low rolling resistance tires weren’t specifically designed for off-road use. It’s asking the tire to do something it wasn’t intended to do.”

Low rolling resistance vocational tires are going to be substantially different than those designed for long-haul operations. “Today, tires that service the long-haul application and tires that service the vocational application are more closely related compared to tires that we will see in the future. As tire design has to achieve greater performance in several different categories, the ability to use generic solutions will be reduced.”

“The LODC calculation is radically different in these applications compared to long haul,” she continues. “While rolling resistance is far more dominant for a long-haul fleet, these benefits are significantly reduced for off-road applications. These trucks travel much slower and require more acceleration/deceleration compared to constant speed travel. Also, the wear and potential damage of the tires is much greater, which in turn tilts the balance in favor of durability and mileage. But there are still ways to optimize rolling resistance while maintaining the needed performance for traction and puncture resistance.”

Vocational applications usually require deeper tread depths, an increase in void in the tread pattern and tread compounding that is more suited for cut and chip resistance. These design elements are counter to how you would design a low rolling resistance tire.

“Traditionally, the tire demands for vocational-duty equipment were durability for use in severe service situations,” says Clauer. “The service areas for vocational equipment are normally limited to relatively small ‘regional’ areas and the amount of highway time was at lower speeds and shorter distances.”

Proper tire selection depends on the time spent in off-road applications and the condition of the road surfaces. “Tires specifically chosen for off-road use will typically be higher in rolling resistance than tires chosen for line-haul operations,” says Cowart. “But within the category of tires designed specifically for off-road uses, there are a range of rolling resistances possible depending upon tire construction and materials.”

“The true fuel-saving benefits of low rolling resistance vocational tires emerge when the vehicles equipped with these tires hit the road or highway when traveling between jobsites,” says Brian Buckham, general manager, product marketing, Goodyear. “That said, it’s important to keep in mind that low rolling resistance is just one performance benefit construction and other vocational fleets demand. Increased miles to removal, often achieved through the presence of more wearable rubber, as well as cut, chip and tear resistance for on- and off-road service, excellent traction and stability and a tough, premium-quality casing to enhance long-term tire retreadability are important needs, as well.”

One challenge is that vocational fleets often have a difficult time measuring fuel efficiency improvements. “While the fleet would immediately see losses due to chip/chunk damage, or fast wear, it’s often difficult for the vocational application to measure improvements in fuel efficiency,” says Carnegie. “Driver behavior and vehicle configuration are at odds with fuel-efficient operations. This is not due to a lack of concern, but a focused business model that must consider a wider range of performance needs.

“With the vocational application, the tread cap compound must serve a wider variety of performance needs, resulting is a greater dependence on other tire components for rolling resistance improvements,” he points out. “These in turn are often in conflict with the need for tire durability requirements.”

“Regardless of vocation, application and wheel position, it is important to achieve the right balance of performance benefits,” says Buckham. “In the past, when one benefit, such as low rolling resistance, in a particular type of tire was optimized, the other benefits of the performance triangle — miles to removal and tear resistance, for example — were reduced. This dynamic is much less prevalent these days.

“With the continual evolution in technology and tire design, engineers have made significant strides in maintaining all three performance properties,” he states. “We recognize that as fuel efficiency regulations continue to tighten, the need for tires that help deliver reduced rolling resistance and enhanced fuel economy will only grow. That’s why we are aggressively investing even more resources in developing tires that help fleets reduce their fuel consumption, with little to no effect on miles to removal and tear resistance.”

For the first time, trailers may be subject to GHG regulations. “Lower rolling resistance vocational tires can be suitable on equipment trailers, especially since these trailers operate mostly on-road and typically drop off equipment at construction sites,” says Goodyear’s Brian Buckham. “Keep in mind that trailer tires generate rolling resistance as they roll, just like the tires on the trucks that pull them. Many all-position vocational tires are suitable for use on trailer applications, meaning they will exhibit the same performance benefits whether mounted on the trailer, drive or steer positions.”

Not all trailer requirements are the same. ‘Some trailers, like spread axle trailers, induce a lot of scrub on the tires,” says Gary Schroeder, Cooper Tire & Rubber. “Therefore, the tires for a spread axle trailer generally have deeper treads to help extend the tread life of the tires. The deeper tread depths will result in the tires having a higher rolling resistance when compared to a shallow tread depth highway trailer tire.”

From sidewall construction to the complex world of compounds, you’ll get an inside look at how tires give telehandlers and MEWPs a boost.
Yokohama Off-Highway Tires America, Inc.
June 22, 2020