Dedicated Tweel manufacturing facility now online, Michelin is offering $100 off each airless, radial skid-steer tire to customers who buy a set through Sept. 30, 2016 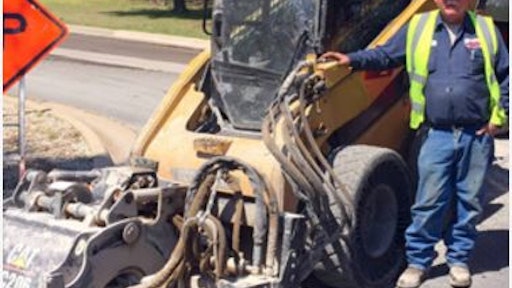 Michelin introduced the Tweel Airless Radial Tire two years ago, claiming the combination of rubber wheel and tire offers the advantages of no maintenance, no performance, ride or durability compromise and no downtime — the X Tweel SSL requires no air, thereby eliminating the risk of a "flat tire."

The Hard Surface tire, which provides more longevity on pavement and asphalt, presents an option for very-high-use operations. The Michelin 12N16.5 X Tweel SSL Hard Surface has a smooth tread with a 100% contact surface, which provides the maximum tread life for pavement applications. The Michelin X Tweel SSL is also available in the All-Terrain design with a deep, open tread for off-road applications. The flexible spokes are specially designed to enhance the tires’ endurance. In addition, the tires have a deep underlying tread layer that allows the core outside tread to be retreaded numerous times, helping reduce the overall cost of ownership.

“Our operators prefer the Tweel SSL over pneumatic tires to eliminate downtime," said Carlton Ashmore, equipment manager for Ashmore Bros/Rogers Group, Inc., an asphalt, milling and paving company serving upstate South Carolina. “We have been using the hard-surface version for several years and have no flats to fix and no issues with traction.”

Mount Vernon, Mo.,-based Blevins Asphalt uses the X Tweel on skid steers that carry asphalt-milling attachments. “With bias tires we had three to four flats per week, sometimes two to three per day, and flats can stop production for as long as two hours,” said Robert Rathman, an operator with Blevins. “With the Michelin X Tweel SSL there are no flats, the traction is good, the ride is better and they last longer. And, the skid steer is more stable because there is no bounce like a bias pneumatic tire.

“Our X TWEEL cores were retreaded, and even though the shoulders of the Tweel SSLs had been impacted from repeatedly hitting steel culvert housings, the original tread deformed and conformed without catching or tearing,” added Rathman. “For the money you would spend on flats, you can buy a set of the X Tweel SSLs.”

In appreciation for customer support, Michelin Tweel Technologies is offering a skid steer airless radial special through Sept. 30, 2016. Customers will receive $100 off each tire with the purchase of a set of four SSL Hard Surface tires or a set of four SSL All-Terrain tires.

Specifically for 3/4- and 1-ton pickup trucks and vans used in commercial applications, as well as for European van platforms
Michelin North America
May 23, 2019

This line of earthmover (EM) diagonal tires is designed for a wide range of construction machinery and available in 28 versions
Mitas Tires
May 22, 2019