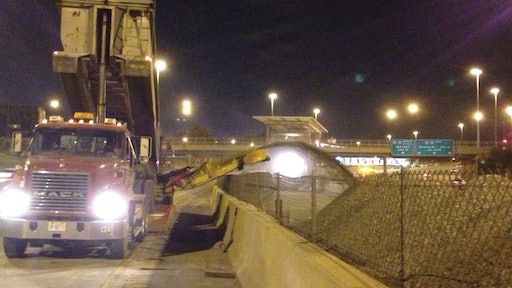 The work on the tracks and the adjacent area needed to be completed without disturbing the walls and fences, which meant the ballast had to be "pitched" over the safety/security structures, required by the Illinois Department of Transportation.

Part of Chicago Mayor Rahm Emanuel’s “Building a New Chicago” initiative, the CTA’s Red Line South Reconstruction Project involved rebuilding the 10.2-mile stretch from just north of Cermak-Chinatown to 95th Street. The 44-year-old line had exceeded its expected life and was plagued by slow zones and delays, according to the CTA. Five months later, the $425 million project - funded by the “Illinois Jobs Now!” program - delivered a brand new railroad to an estimated 80,000 daily riders.

Part of the scope of work included the placement of a new track bed, including new rail ties, tracks and ballast (the stone material along the tracks).

A key to replacing the 1- to 3-inch ballast was a portable modular conveyor from E2 Systems, LLC. The versatile equipment helped the contractor meet some unique project needs.

One of the challenges was the tracks are located between the eastbound and westbound lanes of Chicago’s busy Dan Ryan Expressway (Interstate 90/94). The project also involved placing more than 200,000 tons of American Railway Engineering and Maintenance of Way Association (AREMA) No. 3 ballast, as well as 90,000 tons of Illinois DOT CA6 (course aggregate), most of which had to be placed at night when lane closures would be least disruptive to Chicago commuters.

Although the track work was completed under the auspices of the CTA, the contractor also worked with the Illinois Department of Transportation (Illinois DOT), whose specifications and standards applied to the adjacent highway.

The DOT provided guidance on lane closures, as well as the use of the highway lanes and shoulders for equipment access. The work on the tracks and the adjacent area needed to be completed without disturbing the walls and fences, which meant the ballast had to be “pitched” over the safety/security structures, required by the Illinois Department of Transportation.

The concrete walls and fences are a necessary safety feature, but they also made placing the 1- to 3-inch stone during the track reconstruction project more challenging. The contractor was only allowed to close a single lane and the shoulder from 6:00 p.m. until 6:00 a.m., which only provided a 17-foot working path.

“The Illinois DOT’s wall is 42 inches high - and the fence added another two feet of height - so we had to make adjustments to the equipment to clear the 6-foot barrier, which operated 6 to 8 feet away on the inside shoulders. A standard conveyor would not shoot the ballast that far,” according to the project manager.

The contractor used two different approaches to placing the ballast. The first was a series of metal bins, into which dump trucks dropped the ballast. The boxes were then tipped over the walls/fences, after which the ballast was spread into place.

The other option used E2 System’s portable modular conveyor which was moved along the shoulder on a front-end loader. Moving the 8.5-foot-wide conveyor into place, as well as assembling it to its base, was made easy because of its compatibility with most manufactures’ wheel loaders and other modular equipment.

The conveyor also can be rotated 180 degrees to accommodate desired travel direction, another feature that proved helpful in both set-up and operation.

As the first group of dump trucks headed back to staging areas (a nearby quarry and the contractor’s yard), crews easily and quickly moved the conveyor, which weighs only about 9,800 pounds. This process of “walking” the conveyor along the shoulder was smooth and seamless and without any apparent effort or time.

“The E2 equipment provided a very productive machine that does not require double-handling,” according to the project manager. “The productivity was about the same [as the boxes], but we wanted to have a couple of different ways to get stone over the walls. The biggest advantage is the very simple, open design. There are not a lot of moving parts, which made me comfortable, especially with the large, abrasive materials we were handling. We looked at other equipment with augurs, multiple conveyors and more. With other systems, we were concerned about the large ballast ripping the belt apart.”

The belt speed of approximately 550 feet per minute meant that trucks were emptied in a matter of seconds.

The three-ply, 60-inch-wide belting also stood up to the large, irregularly shaped ballast with no problems. Also, the conveyor’s 21-foot length allowed the ballast to be placed over the top of the wall/fence structures.

“The speed was variable by the use of hydraulics and the size gears in the motor. It was a matter of finding a happy medium between torque and speed,” the project manager said.

At the end of the shift, the conveyor was dissembled, loaded onto a lowboy trailer and returned to the yard. The conveyor folded at mid-point to travel in a 10-foot path while attached to the loader. Folding and travel features controlled from the conveyor’s base also helped make short work of loading and unloading the equipment, as well as assembly/disassembly from the base.

Systems Equipment's Feeder Tailshaft Tachometer is designed to accurately indicate the surface speed of a feeder belt by measuring the rotational speed of the unpowered tailshaft idler.
Systems Equipment
October 21, 2015

Equipment on display will include the 170' long SuperStacker with the Wizard Touch automation control system.
KPI-JCI - Astec Mobile Screens
February 10, 2014