While cured-in-place lining continues to be popular, pipe bursting is gaining ground as an alternative pipe replacement method. 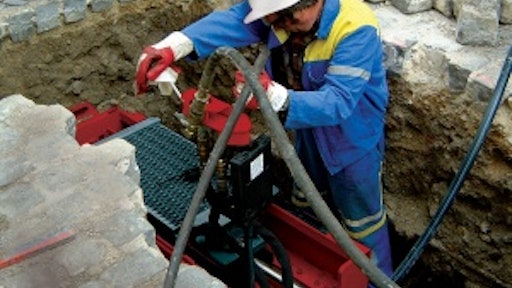 Pipe bursting systems (shown is a Hammerhead HydroBurst HB3038) can replace existing line with brand new pipe of the same size or larger.

Cured-in-place (CIPP) lining continues to be a highly popular and cost-effective method to "replace" an existing sewer or water pipe. But pipe bursting is gaining ground in certain regions and communities.

"The pipe bursting process was intended to compete against open cut, but the technique has had good success in competing with various lining processes, as well," says Collins Orton, TT Technologies. "The process installs a new factory-made pipe to known and verifiable specifications. Some liners are difficult to determine exactly what the final product is because it is made-in-place, [making it] difficult to measure or verify properties."

Contractors in the North or Northwest may be lucky to see 1,000 ft. of pipe bursting per month, says Alan Goodman, Hammerhead. "There are a lot of deep sewer lines because they have to get below the frost line," he explains. "In areas where you see deeper lines and they don't need to increase the diameter size [of the pipe], they'll use the lining method."

The primary reason is cost. At the depths required, it's more cost effective to line than to burst. "That's because when you're pipe bursting, you have to excavate every service line to make a new connection," Goodman states. "With lining, you don't have to do that."

The amount of pipe bursting applied in the city is actually outpacing lining. "The reason for that is pricing," says Goodman. "It costs just a little bit less to line a pipe than to pipe burst it in Houston. The city is looking at it and saying, 'We can get a brand new piece of pipe in the ground, a brand new connection to the service owner, for just a dollar or two more a foot. Let's use the pipe bursting method instead of lining.' They still do lining, but it depends on the area and what's going in."