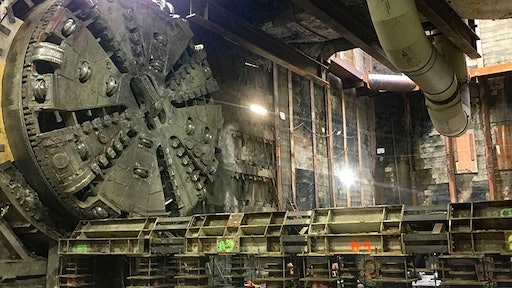 Skanska, a global development and construction firm, together with the Los Angeles Metropolitan Transportation Authority (L.A. Metro) and Traylor Shea, successfully reached the Wilshire/Fairfax subway station via a Tunnel Boring Machine (TBM). This milestone, part of Section 1 of the L.A. Metro Purple Line Extension Project, marks the second station the partners reached via subgrade tunnel for the project. Once complete, the Purple Line Extension will connect Downtown L.A. to West L.A. and serve as a high-capacity transportation alternative to Wilshire Boulevard, one of the busiest and most congested thoroughfares in the United States.

“We’re proud to work with L.A. Metro and implement innovative construction techniques to tackle complex transportation challenges in the region,” said Skanska USA Civil Executive Vice President Mike Aparicio. “This achievement brings us one step closer to significantly altering how millions of Angelenos can connect with each other, the local economy and their communities in a sustainable and efficient way.”

The 1,000-ton, 400-foot TBM, named “Elsie,” started at the Wilshire/La Brea station in October 2019 and broke through the eastern side of the planned Wilshire/Fairfax station site about one mile away on April 4. The TBM tunneled about 60 feet per day, working five days a week for 20 hours a day. Elsie is now resting approximately 70 feet below Wilshire Boulevard. The second TBM, “Soyeon,” is expected to reach the Fairfax Entry in approximately a month.

The TBMs are pressurized, closed-face machines that minimize ground settlement during excavation. The tunnel is lined with precast concrete segments that are bolted together to form a ring. Segments are also gasketed to make the joints between segments water- and gas-tight. The TBMs have mined through a unique combination of soils and geologic conditions, including tar sands and methane gas.

A nine-mile, $9.3-billion underground subway project, the L.A. Metro Purple Line Extension will extend the existing line from Koreatown to Westwood/VA Hospital in West Los Angeles. Section 1 will add three new stations and 3.92 miles of new rail to Metro’s Rail system. The three new stations will be located at Wilshire/La Brea, Wilshire/Fairfax, and Wilshire/La Cienega. Section 1 is expected to be completed in 2023, Section 2 in 2025 and Section 3 in 2027.

With 100 years of history in the Los Angeles region, Skanska combines generations of local knowledge with the vast tools of a global development and construction firm to build what matters for local communities. Skanska’s portfolio ranges from large-scale infrastructure projects providing expanded transportation options across the region, such as the Metro Purple Line extension, Regional Connector and the 6th Street viaduct. The company also recently launched its first commercial development practice in Los Angeles and unveiled the division's first project, a fully-entitled commercial office building in Beverly Hills.